That rainbow flag cartoon everyone shared on Facebook was stolen

If your Facebook friends have an opinion about same-sex marriage, they can express it in a number of ways. Statuses, memes, thinkpieces — and a particular political cartoon that’s been making the rounds.

It’s a powerful drawing. A five-panel progression of a Confederate flag being lowered and, in its place, a rainbow flag rising high. It’s emblematic of the tumultuous and historic last few weeks in America, a short period of time marked by murders in Charleston, sweeping decisions by the Supreme Court and an overall greater sense of consciousness across the country.

But Bob Englehart, the artist of the original cartoon, didn’t draw what most people are sharing. Here’s his work: 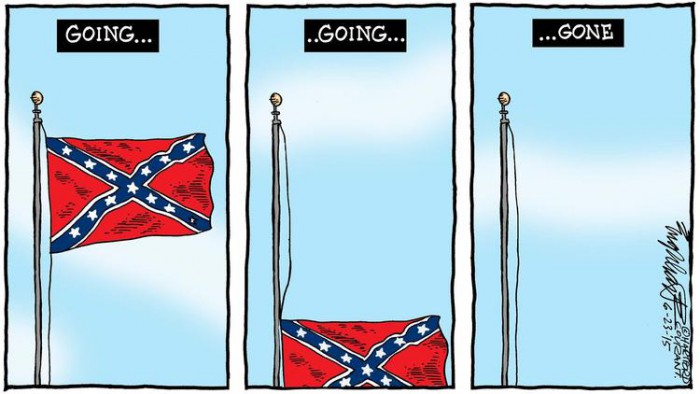 Englehart, who has contributed political cartoons to the Hartford Courant for years, focused only on the Confederate flag coming down in his illustration. Published on June 22nd, days before the Supreme Court even made its decision about same-sex marriage, the cartoon included his “Going…going…gone” caption and signature.

The version that has gone viral included two more panels, no caption and no credit to Englehart.

“This is in complete violation of copyright law and respect for an artist’s work,” Englehart wrote on his Facebook page. “In the spirit of new beginnings, I won’t call whoever did this any names. Use your imagination. This appeared on the Southern Poverty Law Center website. If they are lawyers, they’re not very good ones. They certainly don’t know, or care, about copyright law.”

Though the Southern Poverty Law Center has since credited Englehart for the cartoon, he considers it an ironic gesture—since he didn’t actually draw the version they’re sharing. A version that has accrued over 230,000 likes.

“One more word on the cartoon,” Englehart wrote. “It doesn’t actually work to compare slavery, the actual division of the country and a shooting war in which hundreds of thousands of Americans died to homosexuality. They’re not the same. The battle flag is evil, the rainbow flag is peaceful.”

Here’s Englehart’s take on the Supreme Court ruling, done six days after his Confederate flag drawing. As you can see, it stands on its own. 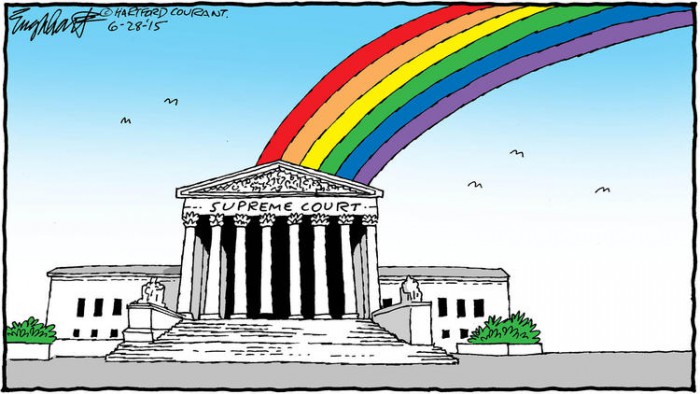