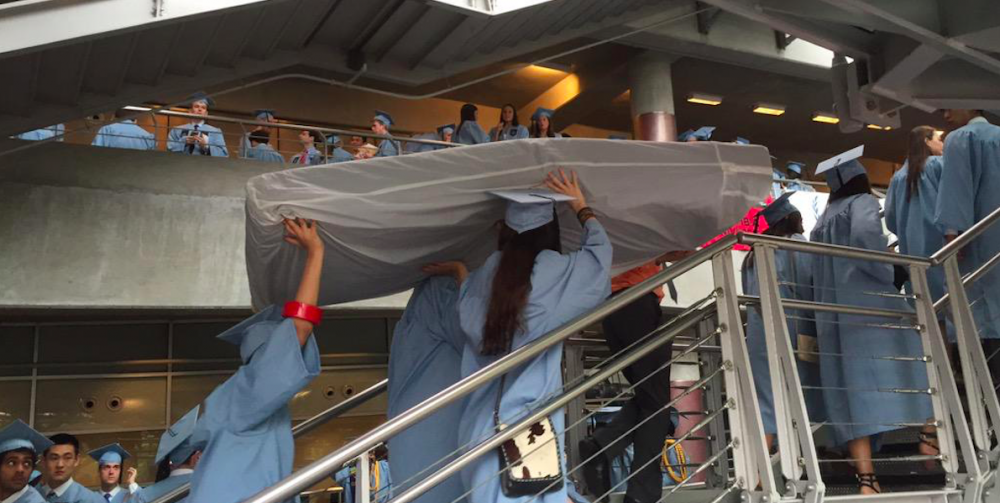 Emma Sulkowicz has carried a 50-pound mattress around Columbia University since accusing a fellow student of rape in 2014.

The day before graduation, campus administration sent an email banning “large objects” from the ceremony. Emma brought the mattress anyway.

As part of a senior thesis project called “Carry the Weight,” Sulkowicz carried the mattress around campus to raise awareness of sexual assault.

An email from Columbia’s administration sent to graduating seniors on Monday outlined the rules and procedures of the ceremony. Unlike similar emails sent to graduating classes in years past, a ban on “large objects” was made. The school claimed such objects could interfere with the proceedings or make attendees uncomfortable.

Emma Sulkowicz is with her mattress, waiting in the processional line for #ccclassday pic.twitter.com/ubaDeG0rQz

Emma Sulkowicz brought the mattress anyway, and refused to shake hands with Columbia’s president, Lee Bolinger, when accepting her diploma.

Emma Sulkowicz did not shake hands with President Lee Bollinger when she went on stage at #ccclassday2015 pic.twitter.com/y7bbKj3iCp

“We communicated to all students that the shared celebratory purpose of Class Day and Commencement calls for mutual respect for the security and comfort of graduating students and their families in attendance.  We are not going to comment on individual students; it is a day for all members of the Class of 2015.  We were not going to physically block entry to graduates who are ultimately responsible for their own choices.”

Nungesser filed a gender-based harassment suit against Columbia University, saying it refused to protect him from harassment that resulted from Sulkowicz’s project. The suit also said Nungesser’s employment prospects were “severely jeopardized.”