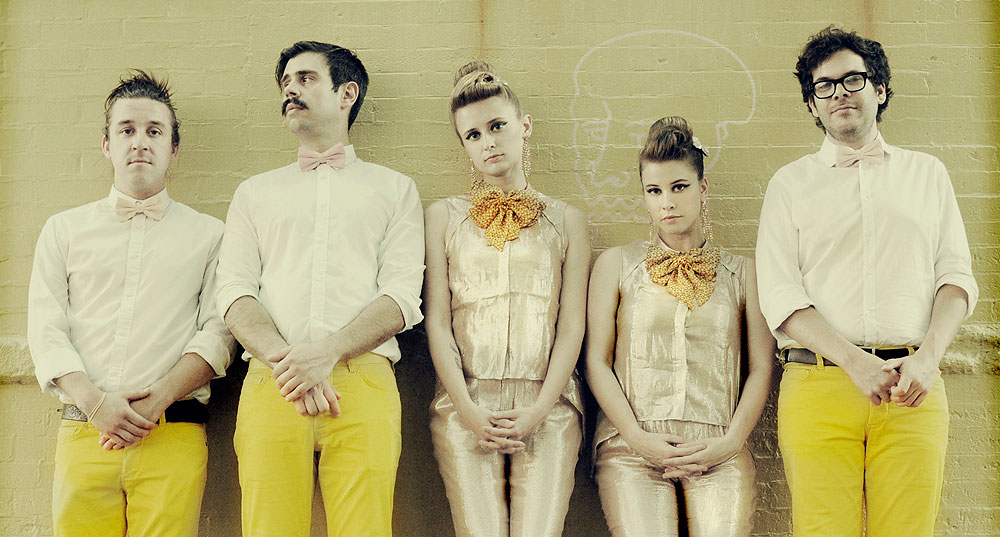 One infallible truth remains at the close of 2013’s music festival season: Geography’s a bitch. Events like South by Southwest or CMJ Music Marathon, which started last week in New York City and wrapped on Saturday, drive this point home at 80 miles per hour, as rushing to every set you want to see results in some maniacal game of venue hopscotch into the wee hours of the morning on a Wednesday. It’s tough and gets better with practice, but at the end of the day, a successful CMJ experience is one where you were able to discover new favorite bands while revisiting your favorites, where you walk away with an iPhone full of notes to yourself, lyrics you found inspiring, or a new act from Australia you’ll keep tabs on until they roll through the US again. These are a few of our favorite things from CMJ 2013, and they were well worth lapping between Brooklyn and lower Manhattan over the course of the past few long, loud days.

Lucius: First: the familiar and the favorites. Lucius (pictured) kicked off our CMJ experience with a packed set at the Rockwood Music Hall on Tuesday, which also happened to be the official release of its first full-length record, “Wildewoman.” If you haven’t gotten into Lucius yet, shove off the rock that you’re apparently squatting underneath, because they’re incredible, and it’s only a matter of time before they’re out of clubs like the quaint and intimate Rockwood and headlining massive theaters in the name of international domination. Lucius first broke around this time last year, when they were tapped for an NPR Tiny Desk session and immediately revered for the ability to make people like pop music again while tricking them into thinking they were salivating over something indie (they also played this year’s late-summer edition of Boston Calling). The quirk and charm we saw with that NPR session remains, and the band’s CMJ run showed, thankfully, that they’ve still got both in spades.

Mean Creek, Kingsley Flood, and Julia Easterlin: Other tried-and-true festival picks that didn’t disappoint were hometown favorites Mean Creek, Kingsley Flood, and Julia Easterlin. Easterlin moved to Brooklyn about a year ago, but given her Berklee roots and Boston love, we can still claim her as our own. If you checked out her insane abilities with a looping pedal and the way she’s able to construct symphonies using nothing but her own voice before your very eyes, you’d do the same. She’s a thrill on the record anyway, but to watch Easterlin—who manipulates and builds upon vocal percussion and soaring harmonies she sings herself while looping them—work her magic in front of a live audience is a site to behold and one that strays far from typical expectations reserved for rock shows. Mean Creek are a dependable pick in that the group’s powerful performance is always flawless and you’re guaranteed a glimpse of frontman Chris Keene’s tonsils, as that guy gets so into each song that you’re opening wide and belting along by the second chorus of every one. Same goes for Kingsley Flood, though Naseem Khuri’s intensity’s a bit less belt-y than Keene’s and more of the whips-himself-into-a-frenzy-until-he’s-practically-unhinged kind of way. Kingsley just played a packed show at the Paradise and is nearing the end of the touring cycle behind February’s “Battles,” its first record since 2011’s “Colder Still” EP. We caught them at Skinny Dennis, a honky tonk bar in Williamsburg with a velvet painting of Willie Nelson behind the bar and a taxidermied squirrel riding a motorcycle on the shelf above it, and this may have been the most appropriate setting yet for the Boston/DC nü-Americana act.

The Defibulators, Beach Day, Eagulls, HAERTS: All these guys fall under the “HOLY HELL HOW COME WE DIDN’T KNOW THEM BEFORE!” category. Beach Day played on every single nostalgic strain leftover from the ’90s, where Gwen Stefani broke into the Top 40 and played the anti-heroine to the pop tarts of the charts and gave you hope for a grittier future for the radio dial. They weren’t perfect by a long shot, but the balance struck between the occasional wrong note or weird tempo with unbridled enthusiasm and basic, surfed-out beauty made them one of our absolute favorite discoveries of CMJ 2013. Eagulls from the UK were up there as well, and we weren’t alone, as the room was packed with industry folks who made it a point to catch their afternoon set to see what the fuss—or, in this case, the loud, straight-forward, in-your-face modern take on intelligent punk—was all about. The Defibulators whet our bluegrass/country appetite something fierce, and HAERTS, a band that left Berklee in the dust as it tours the world behind recently dropped EP “Hemiplegia,” played one of the most hypnotic sets we’ve ever seen at a church in the middle of Washington Square Park for a KEXP live session.

Sheppard: Or, more appropriately, “that band from Australia you really wanted to love but kind of hated but still they were good so ugh.” Due to a scheduling glitch, we missed The Preatures and wound up catching the din of these guys instead. Maybe it’s a foreign thing that gets lost in cultural translation, but these guys were so damn happy and chipper that it was distracting and seemingly disingenuous. The rhythm section was straight-up beastly and the harmonies exquisite, but the excessive snapping and ’50s-era cutesy shit was a little hard to swallow. Anyone who breaks out an extra floor tom for the sake of making more noise is OK in the general rock book, though, so chalk this one up as a ¯\_(ツ)_/¯.

Parks and Tan Vampires: A festival like CMJ is also the ideal opportunity to check bands off your bucket list, as they’re probably playing a handful of shows, and thus eliminate any excuse (however legitimate it may be) to miss them again. This was the case for us when it came to seeing Parks and Tan Vampires. Though highly recommended and adamantly agreed-upon stellar acts by trusted friends and colleagues who’ve checked them out, we’d never actually caught in a live setting before. To say both bands deliver infectious, toe-tapping sets would be an understatement—namely Parks’ “Sweater Weather” and “Playing by the Rules” by Tan Vampires—and this likeability factor just gets kicked up a couple notches the second you throw them in a dimly-lit room with an amplifier or two.

Cults, White Denim, Dale Earnhardt Jr. Jr.: All bands we love (or in the case of Cults, sometimes love to hate) and love to dance to even more. Cults and Dale Earnhardt Jr. Jr. packed Brooklyn Bowl early on CMJ’s first night, with Cults shirking the more popular hits of its catalog (no “Never Saw The Point” found here) for the new stuff off of “Static,” which saw its anticipated release earlier that day (the group also plays our Live in the Lab session on Wednesday). The spectacle brought on by Dale Earnhardt Jr. Jr. was one for the books, complete with giant, sensational light shows, glitter jackets, and euphoric, trance-like moments where Daniel Zott and Joshua Epstein were solo-ing and screaming their faces off in perfect harmony. White Denim always brings a good time, though its vibe and artistic identity have morphed somewhat since the days of “I Start to Run,” one of its best and stylistically bravest endeavors to date. They’ve been steering closer towards the rock sensibilities of yesteryear with the drama of ’70s arena rock (a la “Pretty Green”) and that was in full effect at the sold-out set at the Mercury Lounge.

The two bands we’re the most pissed about missing? Slonk Donkerson and Shark Muffin, if only for the totally ridiculous and LOL-inducing band names. (Seriously, though, Slonk Donkerson comes highly recommended; the next time they’re playing in the city we recommend stifling the giggles and seeking them out.)