Chatting About Art With The Man Behind ‘Not Art’ 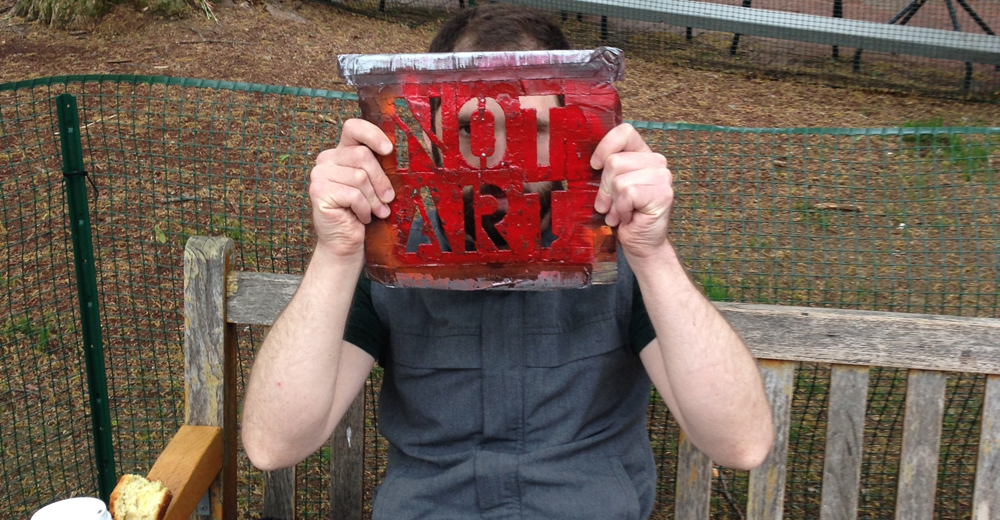 After some back and forth texting one morning with the artist behind ‘Not Art,’ he told me to meet him at Winthrop Park in Harvard Square outside of Peet’s Coffee.  We bought some drinks and he and the barista played around with the phrase ‘on and off’ turning it to ‘off and on’ and then ‘often on.’

“I may have to use that as a visual pun for a piece,” he said.

We meandered around Harvard Square looking for a sheltered spot to talk about his ‘Not Art’ work.  Around fifteen minutes later, we ended up where we started and sat on a bench in the park.

Although he wishes to remain anonymous, the artist actively communicates with his fans and critics alike through social media.  He’s an active Instagram user and tries to comment on everything that is posted under #notart.

“The hashtag of ‘Not Art’ allows me to go and look at it and I can see what people did when they take a photo,” he said.  “Which is awesome, and then they’ll comment and usually say something like, ‘Or is it?’ or ‘Oh thanks for pointing that out.’ What’s awesome is I can make a comment as the artist.”

Sometimes though, the comments aren’t so positive.  Just look at any of the articles written about ‘Not Art’ and you’ll find accusations of vandalism and imitation.

“I know it’s going to piss people off,” he said.  “To me, it’s very much like writing a comment, but in the real world.  I’ll stand behind that comment.  I stand behind what I do.”

The idea of ‘Not Art’ began around 2007, when the artist was a waiter at Rendezvous in Central Square.  Before that, as a student at Oberlin College, he experimented with assemblage and collage work but, according to him, it didn’t really go anywhere.

During a shift at work, he brought in a burnt-looking box to show his coworkers and placed it by the waiters’ station.  He got mixed reactions from customers at the end of the night, but the common thought among them was, ‘what the hell is this box and what’s in it?’ 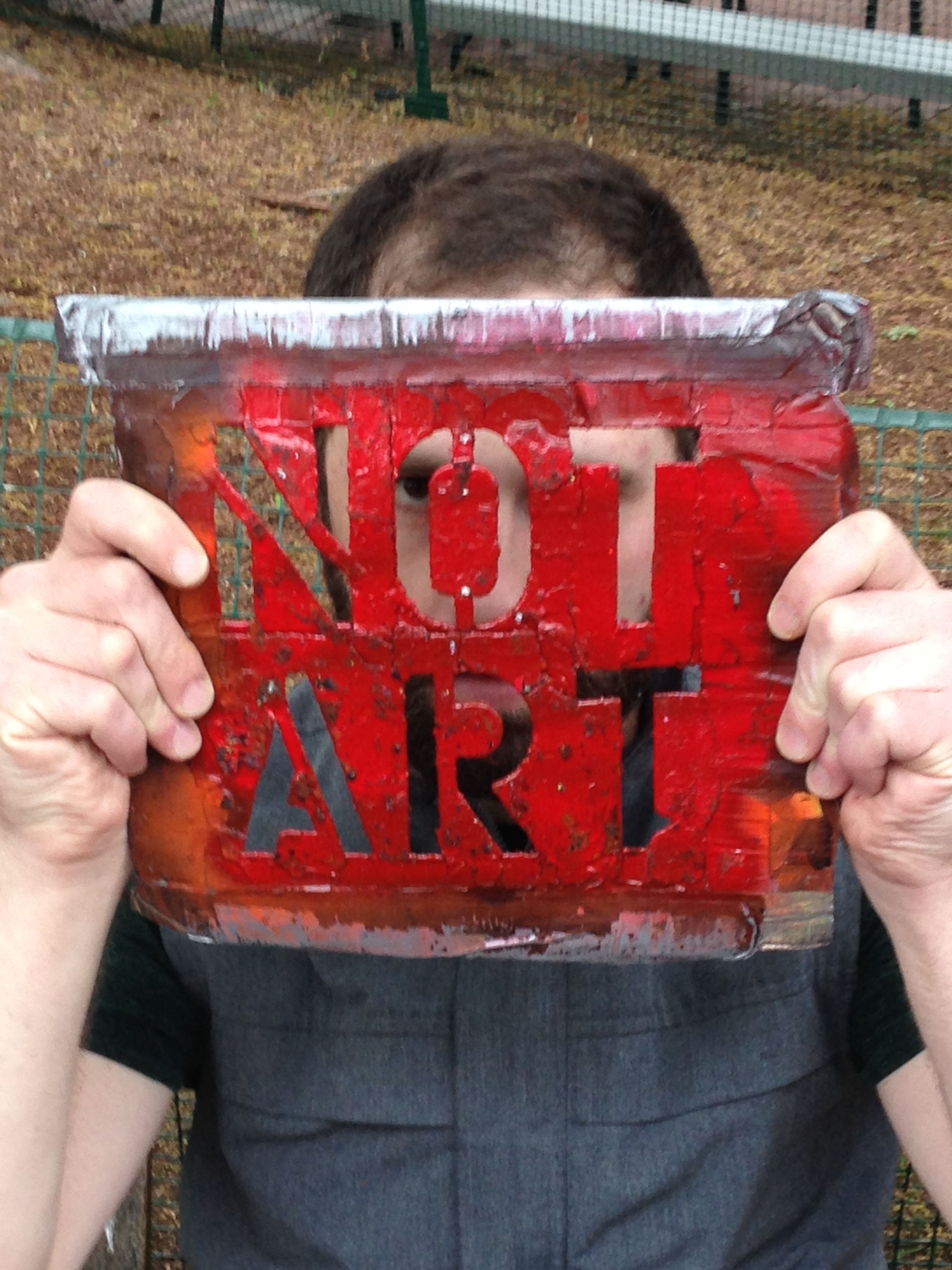 “That moment was like the greatest reaction for me,” he said, rolling a cigarette. “I really loved that idea of wonder– wonder being shock and questioning and awe. Sort of like ‘what is this? And wow.’ I thought, how could I reproduce that moment and it was completely based on the context of my art not being in a gallery. It was out of context and in that moment it wasn’t necessarily art. It was not art to them. After that, I’ve spent all my life making art.”

The artist behind ‘Not Art’ looks like someone you would see flying down a busy street on a street bike. He has a long beard, in his mid 30’s and his jean shorts are dotted with little paint marks. If it weren’t for his ‘Not Art’ stencil on his helmet, I would have thought he was just another dude grabbing a coffee.

To this Somerville artist, art is meant to be universal and expand outside of the galleries.

“I like being able to bring the art to the streets, both literally and figuratively,” he said. “In the sense that these ideas that I’m dealing with as an artist in my own home or in the gallery or whatever, I can bring that to a conversation.” 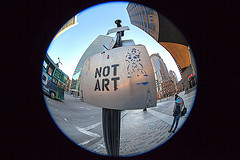 As we talked, a Harvard student walked up to him and asked if he was in fact the man behind ‘Not Art’ after seeing some stencils in his bag. They talked for a moment before returning to the interview.

“Sometimes the finest art at this point is going back to the source of what art is really about. And that’s human connection,” he said. “The finest art is just making that connection, going to the root and just saying hi, smiling to somebody. Because in our culture, that’s becoming a lost art. Everybody’s spending so much time looking at the product of what the artist is making rather than the interaction, which is actually the goal of the art.”

You’ll find ‘Not Art’ pieces on old rusty things, broken up concrete, sidewalks and street signs. To him, art is everywhere and everything. You just have to see it.

“I think that we are at a point where we can look at the object and say ‘yeah that’s art, but so is everything else,” he said. “So is my conversation with you. We should take that as seriously as a Rembrandt. Every conversation with somebody is where the art lies. It’s in the real human connection. That’s what I’m striving to do, to create a connection with people.”

I looked down at my notebook. Little dirty raindrops began to litter the pages. I asked the artist one last question, “So who or what is ‘Not Art?’