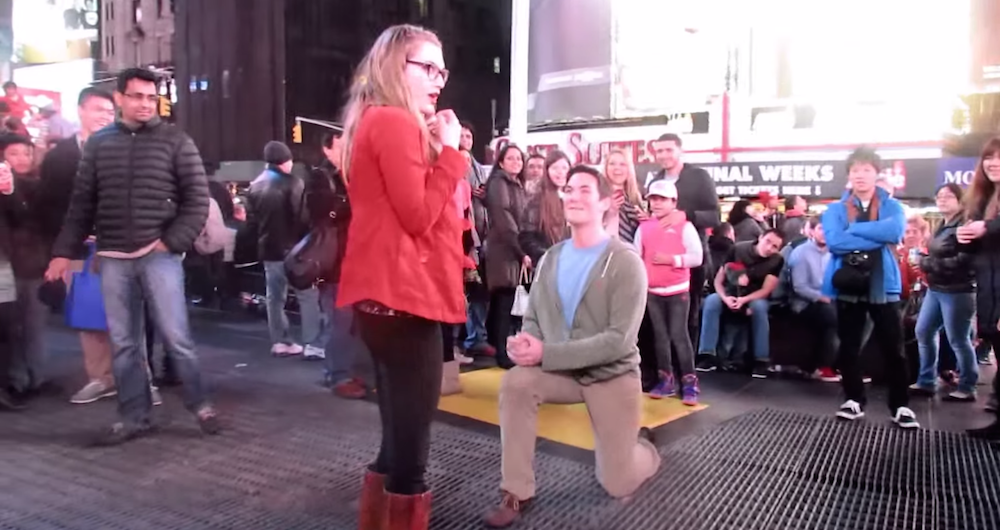 This year, Valentine’s Day isn’t just a day to send each other horrible greeting cards and eat candy that tastes like pulverized chalk. It’s also the tenth anniversary of the founding of YouTube.

It’s hard to imagine what any of us did with our lives before the site launched, but now it’s full of sickeningly elaborate marriage proposal videos, forcing single people to bitterly watch love blossom and causing anxiety for boyfriends everywhere whose proposal plan doesn’t include a choreographed dance.

With that in mind, what better way to commemorate the holiday most responsible for this lovey-dovey tripe and the website that hosts it by watching and laughing at some of the best marriage proposal fails?

There was definite foreshadowing from the train and that’s when the world stops and stares at him for a while.

After his embarrassing moment, a documentary titled Unhung Hero emerged exploring her reason for saying no. Apparently size does matter.

The mascot is such a bro.

An awkward flashmob for an awkward proposal.

No Mom, I do not need this recorded.

With people cheering her on, the girlfriend professes her love and proposes but her boyfriend thinks it’s a joke. She feels offended, to which he responds that he doesn’t have his life together yet and doesn’t even have a car. The girlfriend gives him her car as part of the proposal, but he clearly does not want either the car or a wedding. What was supposed to be a special moment turns into a very tense moment very quickly.

Let’s get this straight; proposing after dating someone for two weeks is too soon.

At least she apologized…

Moral of the story? Never, ever propose in public.

A decade of Wreck The Halls. END_OF_DOCUMENT_TOKEN_TO_BE_REPLACED

Leah Wellbaum from Slothrust brought her trusty six-string to Studio B and turned in the first RadioBDC Session of 2017. Check out her three songs and her chat with Julie Kramer, recorded live on February 28, 2017. END_OF_DOCUMENT_TOKEN_TO_BE_REPLACED

Mike McColgan and Lenny Lashley of Street Dogs were in session on November 30, 2016 to play three songs and chat about their annual Wreck The Halls shows at Brighton Music Hall December 15-18. END_OF_DOCUMENT_TOKEN_TO_BE_REPLACED

Tegan and Sara stopped by for a chat before their House of Blues show on Halloween night. END_OF_DOCUMENT_TOKEN_TO_BE_REPLACED

The sultry boom of Ruby Rose Fox rounded out a summer of sessions in Studio B presented by FindMassMoney.com. Enjoy the videos and Ruby’s chat with Julie Kramer. END_OF_DOCUMENT_TOKEN_TO_BE_REPLACED

She is Dee Dee from the Dum Dum Girls no longer. She is now Kristin Kontrol, and she played a short set for us in Studio B on June 17, 2016. END_OF_DOCUMENT_TOKEN_TO_BE_REPLACED

We were back at the AT&T Store on Boylston St. on June 7, 2016 for another exclusive live session, this time with a favorite of mine, Day Wave. END_OF_DOCUMENT_TOKEN_TO_BE_REPLACED