Can the Bruins get back to the Finals? This stretch run will tell us a lot 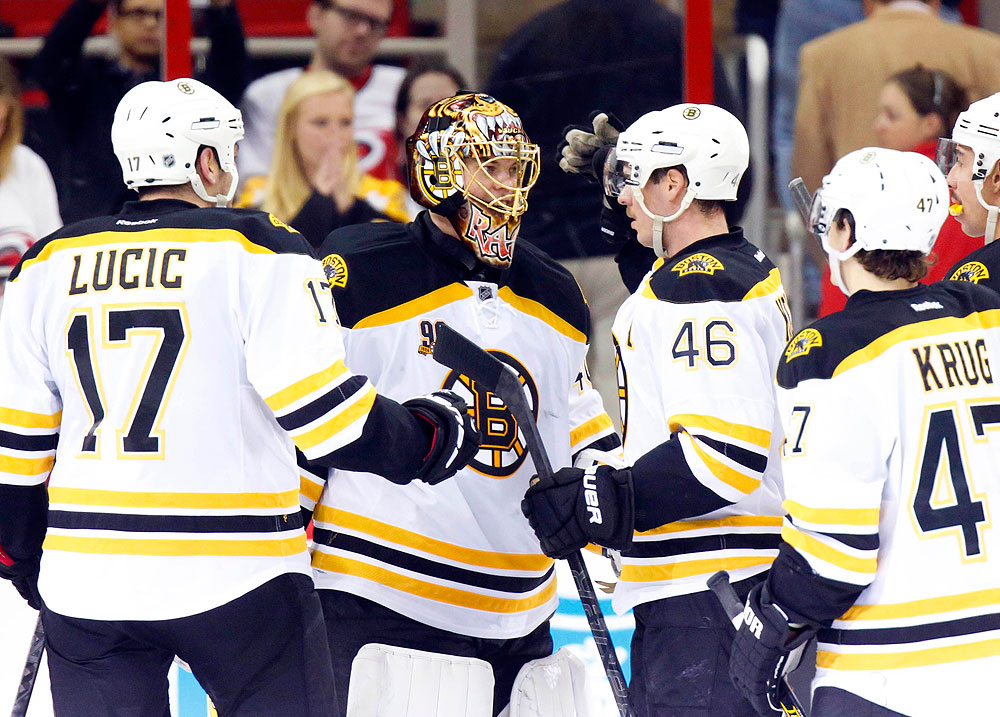 The Bruins returned from a nearly three-week Olympic break on Wednesday night, dropping your basic come-from-behind-fall-from-ahead-in-less-than-a-minute, 5-4 decision in overtime to the Buffalo Sabres. It was an ugly loss, marked by prolonged stretches of both razor sharp, aggressive play and general rustiness and lack of focus. The break came at a lousy time for the Bruins, who were 8-1-2 in their last 11 games prior to the Olympics and not surprisingly looked mighty inconsistent against the Sabres after 18 days off.

But don’t read too much into the loss. Instead, let’s take a look at the upcoming stretch run, which will include Thursday’s trade deadline and consist of 24 games beginning with tomorrow’s matinee at the TD Garden against the Washington Capitals and ending with the regular season finale on April 13, at New Jersey.

To help guide us through the twists and turns of the next six weeks of Boston Bruins hockey, we turn to NESN Bruins analyst and former Bruins’ forward Andy Brickley, who definitely has forgotten more about the game of hockey than you or I will ever know.

“The Bruins shouldn’t have a hard time finding their rhythm again right away,” said Brickley over the phone just prior to the opening face-off of the Buffalo game. “This is a team that relies on its system and that’s the reason why they win. There might be a little rust, sure, but not too much. The Bruins are all about the system, team first, not an individual game, check your ego at the door, etc. There won’t be too much of an adjustment needed.”

The B’s are stacked with young-ish, top-end talent, a lot of which has already experienced winning a Stanley Cup. David Krejci, Milan Lucic, Brad Marchand, Carl Soderberg, Reilly Smith, Torey Krug, Loui Eriksson, and Dougie Hamilton, all key cogs in the Bruins’ core, are all 28 or younger.  Patrice Bergeron, arguably their best player, feels like he could be the elder statesman and he’s only 28 too.

But the key words in that last sentence are “feels like.” That’s because the actual elder statesman is Zdeno Chara, who will be 37 in just over two weeks.

Chara, the indispensable captain, also happens to be the guy around whom everything revolves. No one is on the ice as much as Chara, and with Dennis Seidenberg out, it stands to reason that as the games get bigger, the amount of minutes Chara plays will also grow.

“I’m convinced that the Bruins need another defenseman, a top-three defenseman,” said Brickley, affectionately known as “Brick” around these parts. “Chara is the guy but he’s not 25-30 years old. He’s not one of the core group. The idea is you have to win with him now. He’s in his late 30s, he’s a foundation piece. You can’t ignore that. That’s the focal point, building the team around him to win at this point in his career. And if they really want to challenge for the Cup, they need to somehow, some way, without subtracting too much, replace some of the attributes of Seidenberg.”

As big as the looming deadline is in terms of fortifying the defense and easing some of the burden on Chara, Brickley made sure to point out what a major factor goaltender Tuukka Rask will be over the next two to three months. Rask, who has never started more than 56 games in a season (including playoffs), is already at 43 this year. He’s certain to set a new career high in that category well short of the playoffs, and has shown some slight signs of slippage already.

The Bruins clearly know that Rask must be managed down the stretch, which is why he didn’t even make the trip to Buffalo following his return from Sochi, where he led Finland to a bronze medal game blowout win over Team U.S.A.

You can expect to see Rask back between the pipes tomorrow afternoon against the Caps. And anyone who even casually followed the Bruins’ near miss in last year’s playoffs knows that Rask is capable of brilliance as well as total command in the biggest games. But he’s soon to enter uncharted territory in terms of playing time no matter how much coach Claude Julien spots him, and that bears watching.

“Workload is an issue for Tuukka,” Brickley said. “He’s never played more than 45 games as a No. 1 guy. Physically, he’s not built to be this stud who plays 80 games. But he’s a world class goalie and if you manage his minutes, he can be dominant.

“The organization has confidence in him as do his teammates. When you look at the bench during games you can see these guys are looking at Tuukka and just saying, ‘Wow, this guy is on top of it. He’s going to give us every chance to win.’ Not every team has that guy. The body of work is there and so is the belief his teammates have in him. I expect that knowing he has all the eyeballs on him to some degree, he’ll respond. He’s done it before.”

The Bruins are currently second in the Eastern Conference, just like they finished last season. The only team ahead of them is the Pittsburgh Penguins, just like last season. The B’s went on to sweep the Pens out of the Eastern Conference Finals and a rematch this May/June feels pretty plausible at this point. It’s what happens next that’s murky. Whatever decisions the Bruins make over the next six days will likely go a long way toward clearing up the picture.

“The biggest concern is how do you get to the Eastern Conference Finals and win it,” said Brickley. “With Chara and defenseman X and then Johnny Boychuk as the third guy and down the line, that becomes the strength of your team. You can shut other teams down. We’ve seen it. If the Bruins can pull that together, they have a great chance to go back to the Finals.”

The Black and Gold continue their run tonight at TD Garden. END_OF_DOCUMENT_TOKEN_TO_BE_REPLACED

Who will make the Class of 2018? END_OF_DOCUMENT_TOKEN_TO_BE_REPLACED

It’s been awhile since we talked Black and Gold. END_OF_DOCUMENT_TOKEN_TO_BE_REPLACED

You’re going to wish you were in the Northern Alps. END_OF_DOCUMENT_TOKEN_TO_BE_REPLACED

END_OF_DOCUMENT_TOKEN_TO_BE_REPLACED

Bill might be “on to Tennessee,” but we’re not. END_OF_DOCUMENT_TOKEN_TO_BE_REPLACED