The following busker is of this variety. His performing personality is quiet. He doesn’t stand out and entertain as much as step into the background and enhance the natural environment a little bit, acting almost like a soundtrack, but in a way that colors a place. You see it differently than you normally would because of what he adds to the atmosphere.

Sweet sounds waft into your consciousness and sharpen all of your senses, but you may not even notice where the sounds are coming from until a day when he isn’t there. 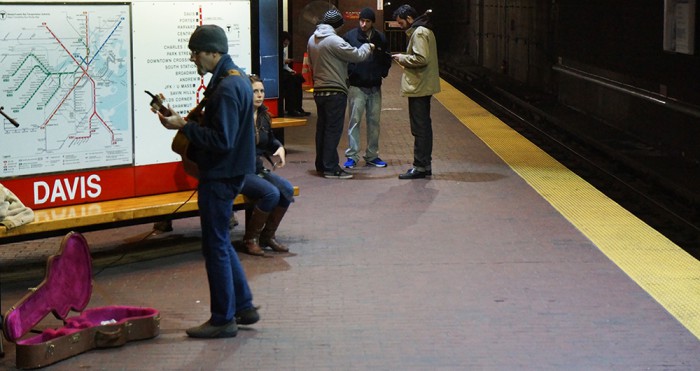 His back is turned and he’s so intently focused on his amp, that it seems likely he’s forgotten where he is.

A sound that started with John Fahey-like picking and tonalities evolves into a calm, fuzzy swell of noise and then is guided carefully back into something song-shaped. It’s filled with longing and questions, but it’s not clear what the longing is for or the questions about.

“I’m definitely interested in trying to find a unique kind of expression—to emote a different kind of a feeling that you might not always feel,” is John’s way of describing what he’s up to. “It’s kind of a combination of a rock feel in the sense that it’s amplified a certain way, but it’s an acoustic guitar, and in a lot of my stuff I use alternate tunings, which is the blues tradition, so it’s a hybrid of those kinds of things.”

And he explains his very understated presence as a respectful one. “Busking, you’re kind of in other peoples’ space. They didn’t pay to come watch you. They don’t know who you are. They don’t necessarily want you to be there. Your song can just grab their attention, without you being obnoxious, getting in their face. I basically don’t want to annoy people too much.”

Despite his introverted style, people do come up and engage with him.

“You meet a lot of different people. Anywhere from homeless people to students. All walks of life. A lot of times people feel like they can come up to you and speak to you, even if you’re not really addressing the crowd or anything, people just come up and ask you things, start a conversation. It opens people up.”

Has it opened him up?

“It’s very spontaneous. You can write a song, you can have an idea, you can put it right out there in front of people and see if they have a reaction to it. Sometimes you think you have something that’s good and then you realize ‘Nope, that’s not working!’ Once you put your guitar on you’re the focus of something. So it’s kind of a test of your own ability to have some guts and put it out there. It builds guts.”

John doesn’t have a website or Facebook page, so If you’d like to hear him, swing by Davis Square or occasionally Harvard Square on weekends. If you can’t find him, he recommends listening to Dave Johnston. “He’s the silver haired guy that’s always playing in Harvard Square.”

Enter to win a pair of tickets to attend The Hess Collection Seminar and Dinner as part of Boston Wine Festival 2018 at the Boston Harbor Hotel on Wednesday, March 14th. END_OF_DOCUMENT_TOKEN_TO_BE_REPLACED

Abe Rybeck, founder and Executive Artistic Director of The Theater Offensive was in studio this morning to talk about ClimACTS! Bounce, which celebrates art loud and proud at Royale on Wednesday, May 3. END_OF_DOCUMENT_TOKEN_TO_BE_REPLACED

Melanie Gillespie is an author and the founder of Mel O’Drama School of Acting in Milton. She was in studio this morning to talk about her latest book Darlene and the Drama Queen and how acting can help kids to develop confidence. END_OF_DOCUMENT_TOKEN_TO_BE_REPLACED

We’re not suggesting coconuts migrate, but we are suggesting that you see Spamalot at North Shore Music Theatre, two weeks only, September 27 through October 9. Click here to grab your tickets, and click “more” to hear my interview with Brad Bradley, who plays Patsy. END_OF_DOCUMENT_TOKEN_TO_BE_REPLACED

You know Dracut, MA native Scott Grimes from television’s American Dad and ER. You know Bob Guiney from The Bachelor and The Bachelorette. But did you know the two are teaming up to raise funds for the Dracut Performing Arts Program? END_OF_DOCUMENT_TOKEN_TO_BE_REPLACED

Boston band Funeral Advantage is Tyler Kershaw. And Tyler Kershaw had a fun childhood, so it seems. END_OF_DOCUMENT_TOKEN_TO_BE_REPLACED

Perry put me on to daephne and the album blew my mind. END_OF_DOCUMENT_TOKEN_TO_BE_REPLACED