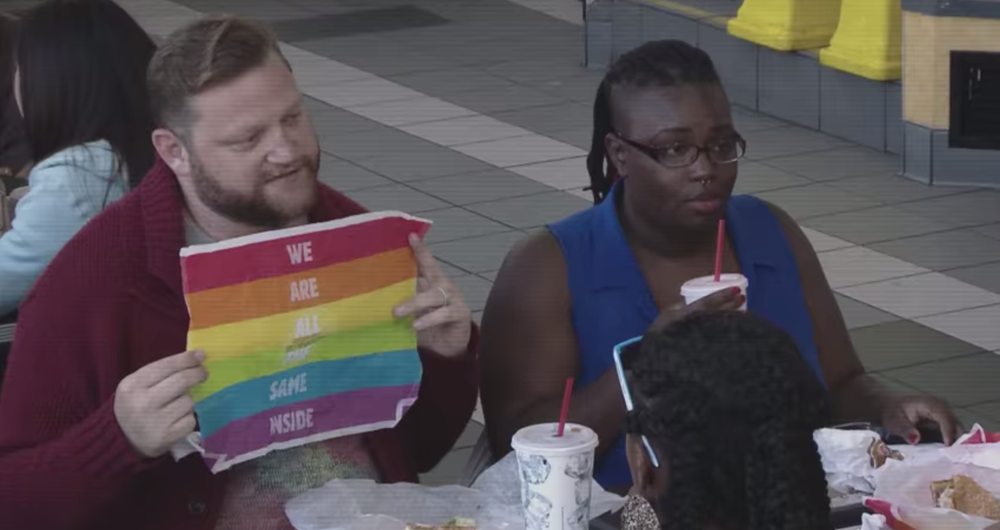 Burger King, in an immaculate brand-leveraging maneuver, introduced the “Proud Whopper” during the San Francisco Pride Parade, a celebration of LGBT equality on the West Coast.

For those not yet initiated, an early interaction between the brand and the brand consumer in the heartstring-tugging viral video/ad campaign released by the fast food conglomerate should explain what the rainbow wrapper-enveloped Proud Whopper is all about:

Burger King: “What do you think of Burger King introducing the Proud Whopper?”

Excited Man: “What? So like it’s a gay burger or what is it?”

“A gay burger,” for our purposes, will work just fine.

The video, published on Wednesday, has garnered more than 2 million views on Youtube, with an impressive 11:1 ratio of thumbs up over thumbs down from the ever-cynical anonymous Internet audience. And it was well earned. People cried legitimate tears of happiness in the video upon reading the message emblazoned on the inside of the wrapper: “We are all the same inside.” Definitely.

As has been rightly noted elsewhere though, at its core, this thing first and foremost is all about moving hamburgers. The message, however positive, is secondary. That can’t be forgotten. Yet, for some reason, that part keeps getting glossed over because of the teary-eyed message at hand.

As Take Part posits, “When a giant corporation uses a social cause to sell its products, we always take it with a grain of salt (see Chili’s). But Burger King’s Proud Whopper, which the fast food chain is making available through July 3 for Gay Pride Week in San Francisco, is so amazing that we might want to buy the burger.”

Basically, “yeah, I see what you’re doing here, Burger King… and I love it!”

And it’s hard not to. The message is great. Beyond that, the issue is still so divisive as to force companies to remain neutral on the matter so as not to offend customers on either side. So it is, in some ways, a bold move on Burger King’s part.

But still, the motive seems so clear. It’s not really about the message. It’s about the brand and a very certain demographic acuity of said brand.

Additionally, it’s hard to find fault with any campaign that raises money to help send high school seniors, LGBT or otherwise, to college, as this one does (the proceeds from the “gay burger” will go towards the company’s McLamore Foundation, which offers such scholarships). But we should be wary of these hybrid activist/commercial movements, as their motives are less than altruistic.

Chef David Vargas, Owner of Vida Cantina in Portsmouth, NH is hosting a one-time-only event that he created to raise money for foundations supporting immigrant workers and their families. He joined me in studio with Chef Daniel Bojorquez of La Brasa in Somerville to talk about Si Se Puede – Yes We Can Dinner on Sunday, April 2. END_OF_DOCUMENT_TOKEN_TO_BE_REPLACED

END_OF_DOCUMENT_TOKEN_TO_BE_REPLACED

I’m in my mid-twenties, and I’ve been working as a substitute teacher for the last couple years (I joined Teach for America right out of college). I know some of the girls in classes I teach have crushes on me — high schoolers aren’t very subtle — but I brush it off, because I’m not an idiot. Last week, however, I got a disturbing email from a girl in the English class I subbed for. Pictures were attached. You get the gist. What do I do about this situation? I obviously haven’t responded, but I’m afraid she might go Lifetime-movie on me. END_OF_DOCUMENT_TOKEN_TO_BE_REPLACED

Ridiculous doesn’t even begin to capture all that transpired, from the storm of emojis to the storming and barricading of Jordan’s house by a cavalcade of Clippers. END_OF_DOCUMENT_TOKEN_TO_BE_REPLACED

My friend has a dog, and she’s always been kind of half-assed about caring for it. I’ll see her out at a party or a barbeque all day long, so I know the dog is home alone, and sometimes she goes out right after she finishes a shift (she’s a waitress, so that might be pretty late), without even going home to feed the dog or let it out. The other day, though, I went over to her house and realized things have crossed a line. There were piles of dog feces in a couple of corners, and the entryway rug was soaked in urine when we walked in. She laughed it off and called the dog naughty, then cleaned up the poop and basically ignored it. I’m worried about the puppy, and about my friend; what kind of person does that to an animal? Should I call animal control on her? END_OF_DOCUMENT_TOKEN_TO_BE_REPLACED