Brotherhood of Grace: Behind the Scenes With Boston’s Best Pre-Teen Rock Band 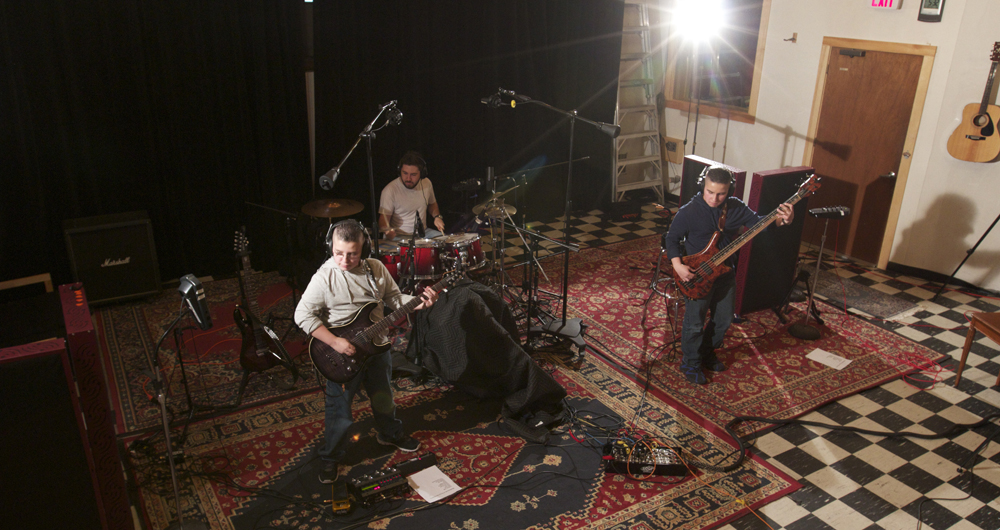 At first glance, Brotherhood of Grace seems like an odd collection of people for a hard rock band. Singer Adrienne Cowan and drummer Steve Finn are both talented Berklee students. Cowan is a thin female who wears mostly black, and usually has on a studded belt. Finn, a male, looks like your typical scruffy college student. The bassist and guitarist are brothers Sam and Max Finkelstein, who are 11 and 13. Sam still has braces.

“If you’re really into music and you see two little kids get up on stage, at first you’re thinking, ‘this is going to suck,’” said the brothers’ dad, Matt Finkelstein. “And then they start playing and you’re like ‘Whoa. That’s insane I can’t believe that.’”

The band as a whole are all extremely talented, clearly all well-versed in technique and composition. Each musician has chops, and, if blindfolded, you could never tell that Sam and Max are in elementary and middle school. Cowan says the age difference has never been an issue.

“I forget they’re younger. It’s really cool. The audiences are all super receptive. They’re like ‘whoa there’s a kid that can totally shred,’” said Cowan. “They’re very mature as well, so it’s not weird at all. They’re super professional and it’s great. I enjoy it. “

Finn has a similar experience.

Brotherhood’s current lineup came together relatively recently. Finn joined the group last year. The Finkelsteins asked him to join after they had seen Finn perform with his dad John Finn, a Berklee professor, at several open mic events. Cowan joined even more recently, after being referred by a band mate of another project.

The band’s name, however, stems from a prior incarnation of the band.

“Our old singer, her name was Grace, and me and Max would be the brotherhood. But Grace was cool because it wasn’t just around the singer. It had more than one meaning. So it kind of worked out cool with the logo too,” said Sam.

Brotherhood’s sound is a mix of hard rock, progressive metal and blues.

“We do a lot of covers. We’re working on some originals … it’s a little bit metal-y and sort of progressive. I mean the kids are really big Dream Theatre fans. We’re doing a lot of bluesy stuff as well,” said Cowan.

The brothers and Finn all listed Dream Theatre as one of their all time favorites.

“Steve actually turned me on to metal shortly after he joined. So I think it was around August that I started to really get into the whole metal stuff. I think that’s really cool because I’m starting to write music now and I can kind of incorporate that into the new music that we’ll eventually start to play live,” said Sam.

For the two brothers, music is a consuming activity. Their skill comes from hours of practice.

“I practice a lot, ‘cause if I didn’t I would kind of start to lose it. Like I practice for about three hours every day. I come home, do homework, and then just practice,” said Sam. “I mean, I think the days that I don’t practice are when I’m on vacation, but I’ll practice like an hour and a half.”

Sam uses his iPad, headphones and an app called JamUp Pro to practice when he isn’t home. Max’s regimen is a little lighter.

“I practice as much as I can. I love doing it. It’s really rewarding and it’s so much fun. Not as much as [my brother], he’s ridiculous,” said Max. 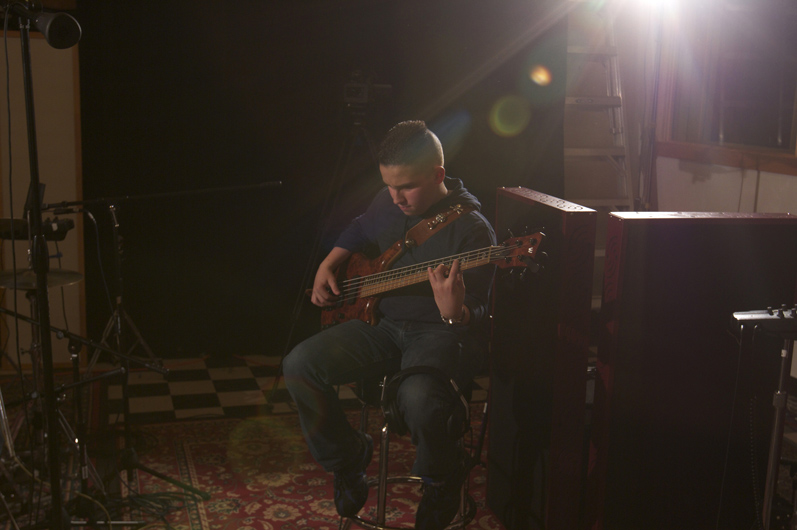 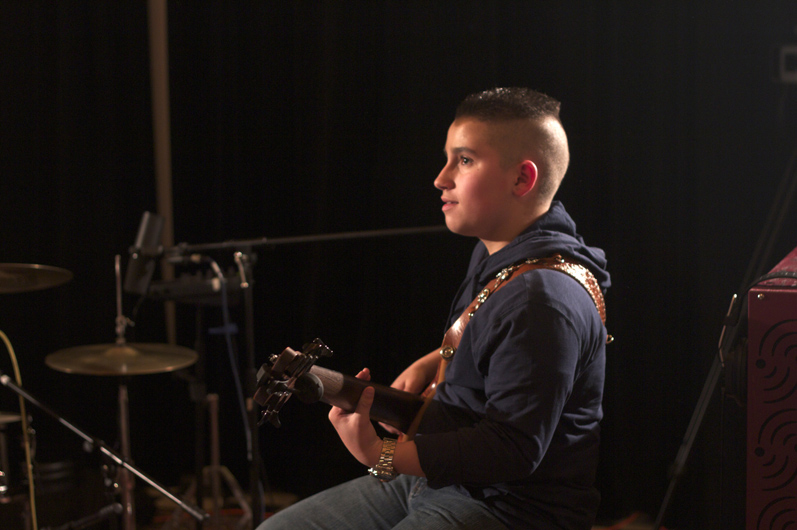 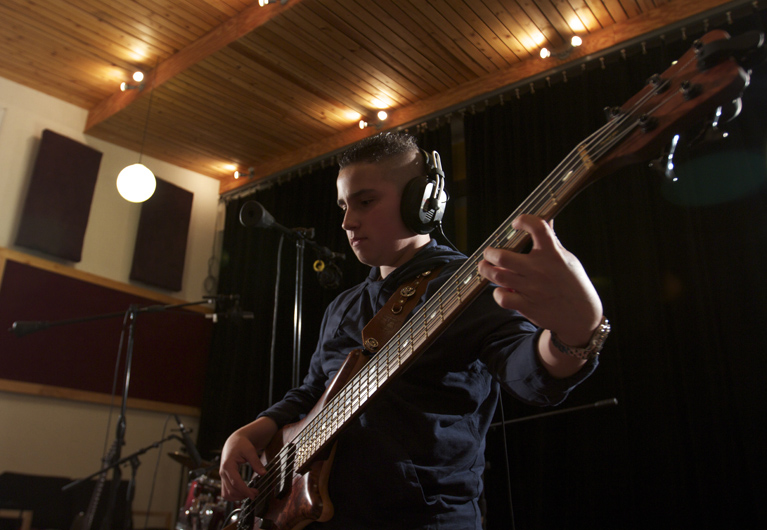 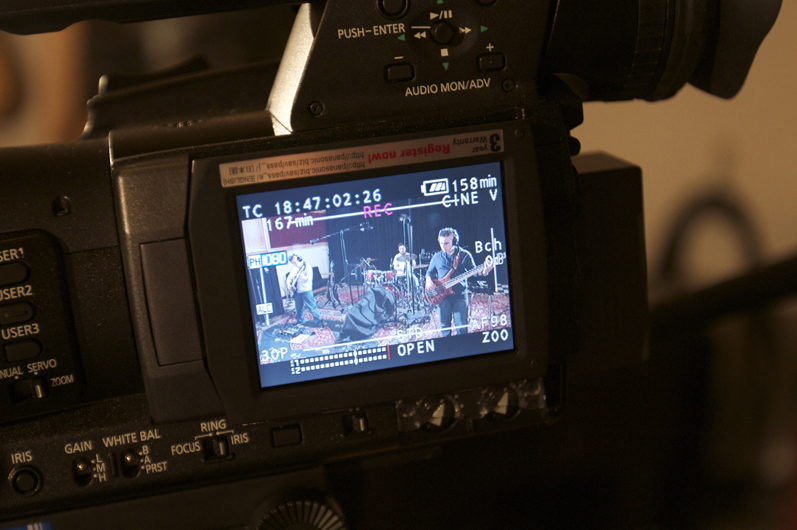 The two brothers have been playing since they could both remember, which is one of the most intriguing things about them. When I first heard from the boys’ dad he sent me a video of the band, and mentioned their tale as similar to that of Todd Marinovich. Matt told me over the phone that he likes to do everything big, and directed me to come to a recording studio when I asked about photographing the band.


“There was a kid Todd Marinovich … His parents before he was born, once they knew he was a dude, they decided they were going to program him to be a football player. I don’t know if they did nothing whether he would play football,” said Matt. “The point was: what happens when you take a kid and program him to be something? So with my kids, brain connections are all open so what happens if instead of putting him in a Barney swinging chair, you put him in front of Stevie Ray Vaughn DVDs, Yes DVDs, Led Zeppelin DVDs, Pink Floyd DVDs ? You know? What’s going to happen? Is it going to do something? Is it going to make brain connections? Let’s experiment.”


Matt said that since both his sons were in the womb, that he exposed them to music, putting headphones up to his wife’s stomach. Playing for the boys, titans of classic rock.


“Todd Marinovich didn’t eat sugar, my kids didn’t listen to pop music … I never let them listen to radio. To me it’s just garbage,” said Matt. “I spoon fed them the right diet of great guitar players, Jeff Beck, Jimmy Page, Steve Morse, Steve Vai, gosh the list goes on and on. Really virtuoso guitar players that not necessarily everybody in the mainstream has heard of.”


Matt added that he built a miniature drum set for the boys to be able to play as soon as they could walk. As a result, Matt says the boys’ interests have mostly been music.


“We don’t play video games. No Xbox … They’re not that interested in it. They don’t watch TV, they’re not interested in TV. They’ll watch occasionally, but they won’t sit glued for hours. So what do you do? It’s the winter, you live in Massachusetts and you’re not playing video games and you’re not really into TV. Pick up a guitar, pick up a bass, play the piano, write some songs. Is that bad? Is that bad parenting? I don’t know.”


Matt also acts as the band’s manager, booking studio time, gigs and coordinating the whole band. He’s quick to point out however, that he isn’t a stage mom.


“Listen, if my kids make something out of it or don’t, it is what it is. Whatever. But for the rest of their lives… how many fifth graders, or at the time, how many third and fourth graders got to play at bars and clubs? How cool is that?,” said Matt. “And when they’re older and they’ll be able to be brothers and be in bands even if they’re a street sweeper or whatever the hell they want to do … they’ll always have that.” 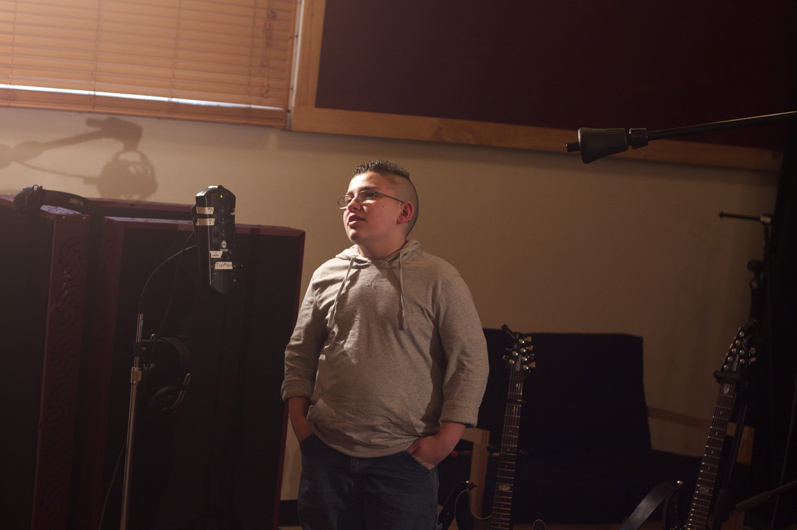 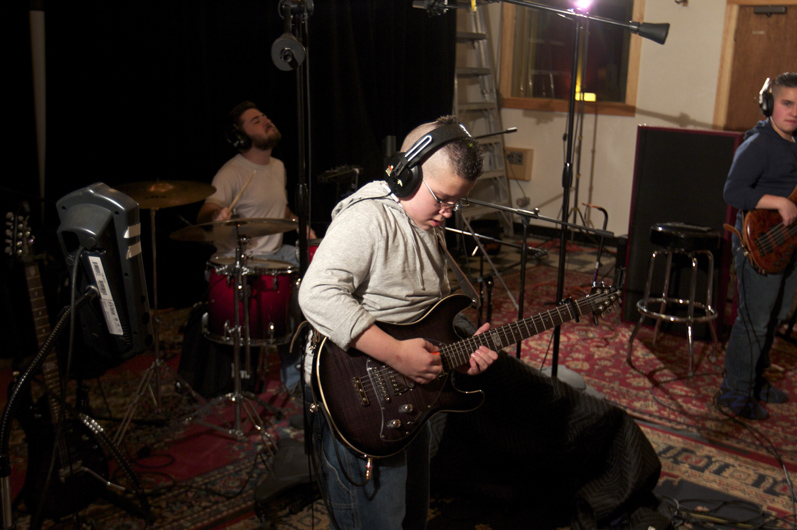 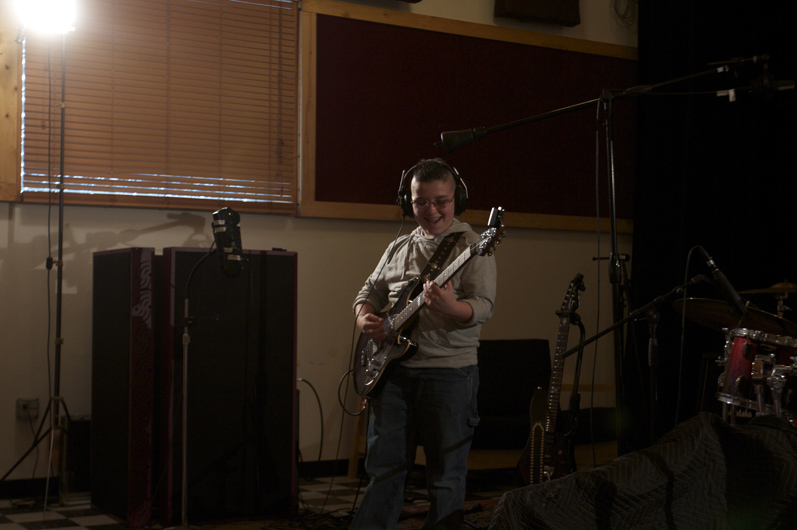 Matt also revels in not being the same as other parents.


“Most parents … watch little Johnny play soccer after school … they go out for pizza. I get to go to a bar and hang out with my buddies and have some drinks have some snacks and watch my kids play on stage and people go crazy. How much fun is that? It’s awesome,” said Matt. “Am I living vicariously through them? Eh. I don’t really want to be up on stage doing that thing. But it’s a blast watching them. What parent wouldn’t?”


Matt sharply criticizes mainstream radio, in particular artists like Miley Cyrus, who he says are more shocking than they are real musicians. Both brothers also feel like their classmates don’t get it, saying that they listen to a lot of top 40. Sam and Max both feel like their musical taste has advanced well beyond their peers. 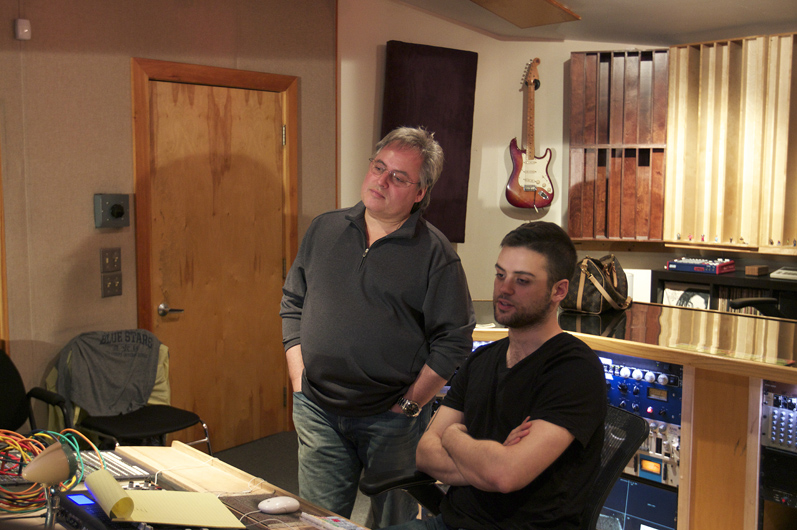 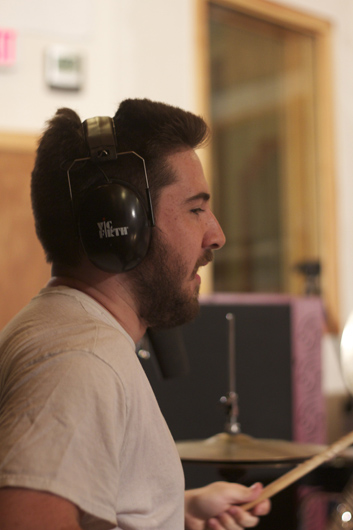 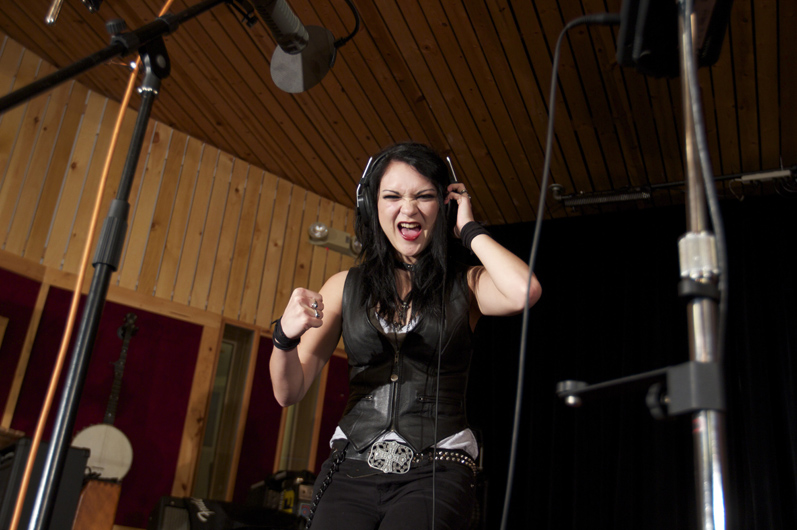 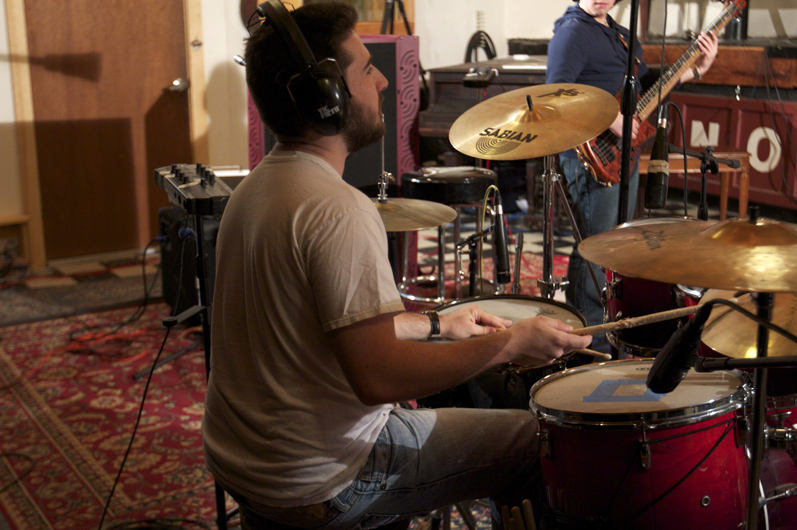 Both boys have aspirations to be musicians when they grow up, though Max is beginning to develop some new interests like science and math.


“I’m really undecided right now. As weird as it sounds for someone my age to say, I would want to be either a musician, like a full time musician or dermatologist,” said Max, smiling shyly. ““It’s so good to have parents that are really really supportive of us. “


For now Brotherhood of Grace is working on writing music and developing their sound. Sam says he is busy working with the band to come up with more originals to add to their cover-heavy set. At some point the band wants to record an album, which probably won’t be a problem with Matt’s help. The band can be comfortable right now just with their ability to turn heads.


“I have played at my middle school talent show, three or four times. The last time we had Steve and played a Dream Theatre song. It’s really fun to do that, but at the same time I feel really bad,” said Max. “‘Cause it’s a middle school talent show and we come in with like a smoke machine and lights and we ask the school to shut all the lights in the auditorium off. They were ok about it. They didn’t mind turning down the lights, but the smoke machine they were a little iffy on.”


The smoke machine was in part Matt’s idea.