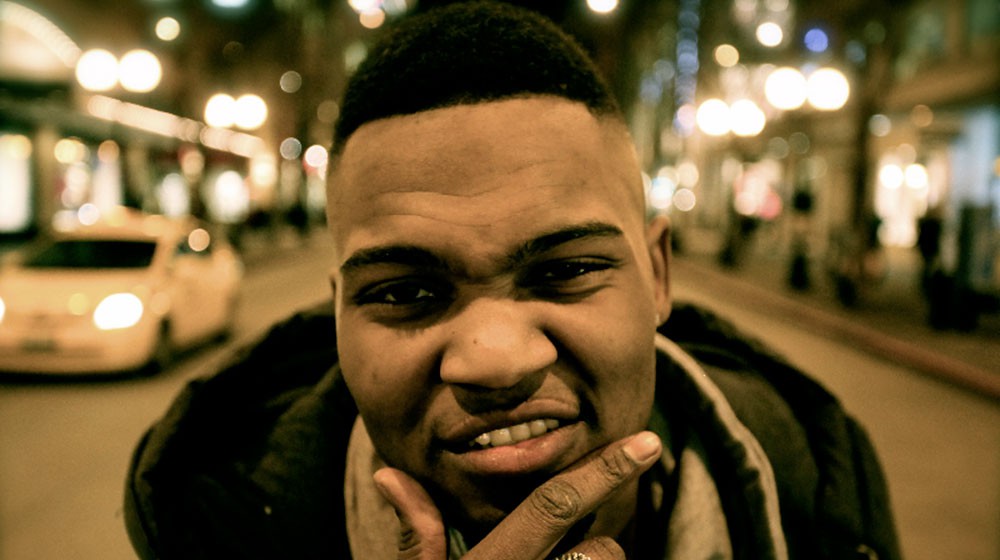 Seattle headlines Broke Beats for the second week in a row, but this time it’s an emcee we find gazing skyward.

The emcee in question is Raz Simone. But unlike Lavitt, Simone, who recently released the buzzworthy Macklemore’s Privilege and Chief on Keef Crime, isn’t rapping telescopic bars about stardust and solar flares. Instead, he’s launching prayers up towards the Heaven in search of a savior. But Baby Jesus isn’t praise for the Lord so much as it’s an assertion of the Second Coming — that is to say, Simone himself.

The seven-song mixtape opens with everyone’s favorite grace scene from Talladega Nights, but that’s where the Black Umbrella founder stops messing around. Opener “Baby Jesus” starts with the image of Simone praying in the mirror, blessing himself for being so fly. In the song, he lays out a prophetic vision of himself as the voice of his city and generation, one that’s only bolstered by the orchestral violins scoring each verse. Though Simone sounds far less certain of his omnipotence on “No Tellin,'” any and all confidence is recovered on “That Ain’t Love,” which features Leezy Soprano and cocaine disciple Pusha T. The track, which serves as the tape’s lead single, is a trap banger with spazzy hi-hats and diabolical extended bass lines.

This is the first we hear of Simone’s singing voice, which undulates somewhere between Anthony Hamilton and Rich Homie Quan. Raz is equally talented whether he’s rapping or crooning, a fact that is best displayed on “All in My Mind.” A sparse and steady beat drives this mellow reflection, wherein we hear Simone lamenting the street life while simultaneously glorifying himself as the messiah of his lifestyle. Simone claims he started rapping by reciting poems over movie scores, and those roots are clearly audible on “All in My Mind,” which could be a sepia tracking shot rolling through his neighborhood in the Pacific Northwest.

Simone doesn’t get back into the Biblical milieu until the album’s close, “Hallelujah,” but it’s a hulking sax- and piano-driven overture that could make the clouds open up if played loudly enough. “Hallelujah” is the first time we hear Simone really let loose on a verse. He falls to his knees with a desperate growl before the first chorus even strikes, spitting revelations and sacrileges alike. The song is equal parts struggle anthem and theme song, as Raz quotes scripture en route to declaring himself risen from his broken background.

Simone’s gospel won’t cost you so much as a dime in the collection plate, which is enough to make anyone a convert. Amen.

Enter to win tickets to see Trio Da Kali at The Villa Victoria Center of the Arts (Newton, MA) on April 10th. END_OF_DOCUMENT_TOKEN_TO_BE_REPLACED

END_OF_DOCUMENT_TOKEN_TO_BE_REPLACED

Enter to win tickets to Rhye at The Paradise on February 28th. END_OF_DOCUMENT_TOKEN_TO_BE_REPLACED

Her new album has been pushed back, but we have Kimbra’s new single for you. END_OF_DOCUMENT_TOKEN_TO_BE_REPLACED

The folk duo returns with a new record this week. END_OF_DOCUMENT_TOKEN_TO_BE_REPLACED

Now that we’re done looking back at 2017, let’s look ahead at 2018. END_OF_DOCUMENT_TOKEN_TO_BE_REPLACED

Our first Song of the Week for 2018. END_OF_DOCUMENT_TOKEN_TO_BE_REPLACED

In a year when so many things were off, the music was right on. END_OF_DOCUMENT_TOKEN_TO_BE_REPLACED