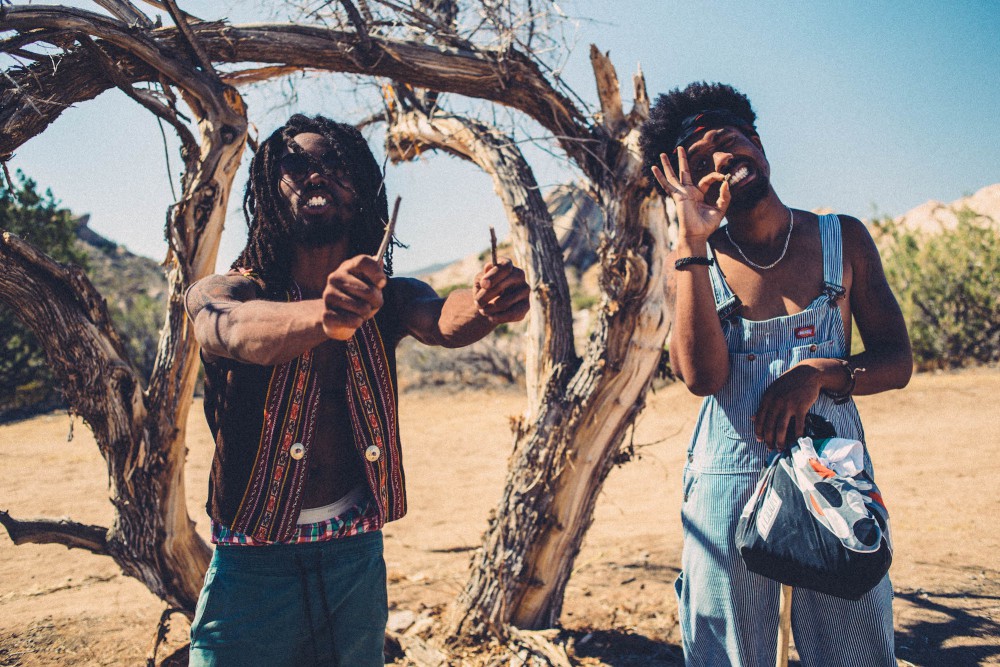 Johnny Venus and Doctur Dot are the twosome who make up Atalanta gone rap group EarthGang. The duo, who draw apt comparisons to LA psych-rap pioneers Pharcyde, released their followup EP Torba this week, and it’s a statement all in its own.

EarthGang’s ambition on Torba is to chronicle the cresting emotion of the average week, and each entry on their seven-song EP is devoted to a day of the week. It’s one of the most logical setups for a concept album ever to emerge from hip-hop, however banal it may seem. When the two Georgians take their episodic microscope to the average flow of the week, the delicate minutiae is artfully examines, and an underexamined pattern emerges.

“Monday” begins the pair’s week with a pretty dreadful verse from Mac Miller, but Venus and Dot manage to recover by translating the stereotypical Monday malaise into a narrative about wanting to skip school and live out a dope boy fantasy. EarthGang covers midweek with a sense of panic and urgency, affecting a Kendrick Lamar-esque cadence that rushes by in the way 9-5ers wish Tuesday and Wednesday would.

Producer Childish Major, who bridges “Wednesday” into “Thursday” is the most notable beatmaker on the EP, and his warm, analog-sounding strings and keys. Both songs contain Venus and Dot’s most creative flows and catchiest choruses. That is, until we get to one of the best anthems ever written for Friday.

“Friday” (the “F Bomb Remix,” as it’s dubbed) features fellow Atlanta rapper and Vine flavor of the week OG Maco and is unadulterated release. After a five-stage journey to the weekend, EarthGang and Maco are ready to toss it all out the window on their drive home from work. “I don’t give a fuck” refrains in gang vocals, echoing the revelry of all workaday schmoes who need an afternoon catharsis. And Maco’s guest here is excellently self-aware, as he takes the imperative to purge his own spectres of doubt.

Comparatively, EarthGang’s weekend is chill. “Saturday” is blunted, and both emcees rap with a relaxed disaffection. “Sunday,” which features J.I.D., follows in suit, with Shine and Left Lane Lonnie infusing cool gospel tones into the beat with clips of dialog. It’s the perfect vibed-out reprieve before the hectic of “Monday” comes back in and resets the chaos.

Enter to win tickets to see Trio Da Kali at The Villa Victoria Center of the Arts (Newton, MA) on April 10th. END_OF_DOCUMENT_TOKEN_TO_BE_REPLACED

END_OF_DOCUMENT_TOKEN_TO_BE_REPLACED

Enter to win tickets to Rhye at The Paradise on February 28th. END_OF_DOCUMENT_TOKEN_TO_BE_REPLACED

Her new album has been pushed back, but we have Kimbra’s new single for you. END_OF_DOCUMENT_TOKEN_TO_BE_REPLACED

The folk duo returns with a new record this week. END_OF_DOCUMENT_TOKEN_TO_BE_REPLACED

Now that we’re done looking back at 2017, let’s look ahead at 2018. END_OF_DOCUMENT_TOKEN_TO_BE_REPLACED

Our first Song of the Week for 2018. END_OF_DOCUMENT_TOKEN_TO_BE_REPLACED

In a year when so many things were off, the music was right on. END_OF_DOCUMENT_TOKEN_TO_BE_REPLACED