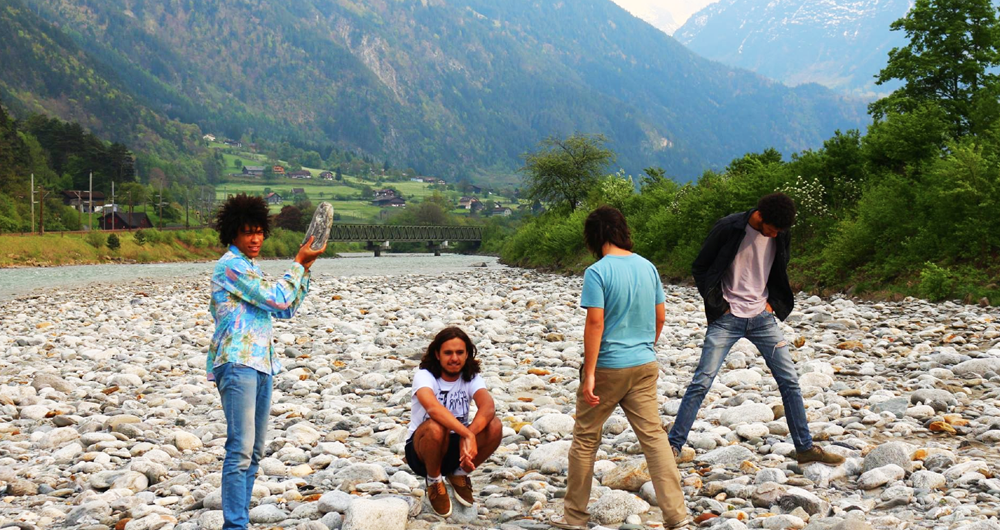 The story arc of Boogarins, a psych pop group firmly rooted in the ‘60s, follows a familiar trajectory: two musicians meet in high school, record an album in their parents’ basements and begin to find aboveground success. This story comes with a few international wrinkles, though.

Fernando Almeida and Benke Ferraz hail from Goiania, a mid-sized Brazilian city far away from the country’s cultural capitals. Even though they recorded their debut album entirely in Portuguese, they’ve spent the last six months touring the indie rock circuit in the States and Europe with the help of Other Music, a New York-based label. Next month, lead singer Almeida and multi-instrumentalist Ferraz return home as global travelers — all before their 21st birthday.

We spoke with Ferraz before Boogarins begin their last string of 15 dates in the States on DIY in Brazil, their musical roots, tropicalismo, songwriting and and missing home.

Q: Boogarins come from a DIY background, lo-fi recordings and initial support from California-based DIY label Burger Records. Is there a DIY music and show culture in Brazil?

A: The DIY scene is quite different [in the US] than it is in Brazil because things happen more comfortably here. Two years before, we had festivals, supported by the government in a public space, a public auditorium. You could go there and do a festival. Nowadays, there’s less do-it-yourself.

Q: What kind of music did you grow up on?

A: My mom listened to a lot of Brazilian music like the ‘70s and ‘80s guys. A lot of music from the US and around the world would play on the radio. My mom really enjoyed the Clube da Esquina scene, Milton Nascimento and Caetano Veloso. And after, sometime, we started listening to rock music.

Q: Your music is often compared to artists from the Brazilian tropicalismo era. What are some artists you recommend listening to from that era?

A: Gilberto Gil, Caetano Veloso… One guy, he’s not inside the tropicalismo, but he’s very good: Ronnie Von. We had the biggest moment at the end of the ‘60s. Right after, a lot of guys were post-tropicalismo: Walter Franco, Milton Nascimento, Clube da Esquina are not tropicalia, but something that tropicalia did.

Q: How did the songs off of your first album, “As Plantas Que Curam” come together?

A: We had some songs at the beginning. It’s not an idea that came from the melody most of the time… maybe an inspired moment, and you get a melody, a harmony. When we sit and try to finish it, we come up with a song. The first day that we decided to finish the five ideas that we had, we spent most of the afternoon with the first half, which was the first EP before Other Music came to us. The lyrics and the songs talk about something, but it’s not isolated moments. I think that’s why they have this energy, because we didn’t even record all of the songs in the same way.

Q: You just began touring outside of your hometown this past spring, and you’ve since played dozens of club and festival dates across the globe. How has touring been?

A: It was our first experience outside of Brazil, even as a tourist. So we were in a whole different community, a whole different culture for us. It’s a different level in music experience for us where you can really enjoy and live the music that you like in a big level, a big proportion. These kind of festivals and concerts that we can watch here every week, it happens in Brazil once a year. It’s been a great musical experience, and life experience as well.

Q: I’m sure. Have Boogarins become popular in Brazil?

A: In our home city, we are popular — but popular in our scene. We’ve been playing around the world for six months. We didn’t stop in Brazil. People know about it, hear about it, but it’s not a massive thing. We’re going to come back to Brazil and we’re going to play the most that we can as we do here, but at some level we’re going to have to take our day jobs again. Things didn’t change that much.

Q: Will Brazil always be your home?

A: I think so. Since we started this tour, we have fun making concerts, meeting people that like us, meeting people that didn’t know us before, so it’s a really great experience. But when we played in Portugal two weeks before, it’s a different experience playing live with people understanding what you’re saying in your natural language. Singing the songs along. It’s a different experience. Here in the US, we have a more musical experience because we people are used to enjoying this kind of music. But we’ve been missing our home too.

Boogarins play Church of Boston tonight at 8 p.m. with Atlantic Thrills, The Televibes and Gymnshorts. Tickets are $10.

Enter to win tickets to see Trio Da Kali at The Villa Victoria Center of the Arts (Newton, MA) on April 10th. END_OF_DOCUMENT_TOKEN_TO_BE_REPLACED

END_OF_DOCUMENT_TOKEN_TO_BE_REPLACED

Enter to win tickets to Rhye at The Paradise on February 28th. END_OF_DOCUMENT_TOKEN_TO_BE_REPLACED

Her new album has been pushed back, but we have Kimbra’s new single for you. END_OF_DOCUMENT_TOKEN_TO_BE_REPLACED

The folk duo returns with a new record this week. END_OF_DOCUMENT_TOKEN_TO_BE_REPLACED

Now that we’re done looking back at 2017, let’s look ahead at 2018. END_OF_DOCUMENT_TOKEN_TO_BE_REPLACED

Our first Song of the Week for 2018. END_OF_DOCUMENT_TOKEN_TO_BE_REPLACED

In a year when so many things were off, the music was right on. END_OF_DOCUMENT_TOKEN_TO_BE_REPLACED