The Pitch: Digging the Sounds of 12-Year-Old Bradley Bartlett-Roche 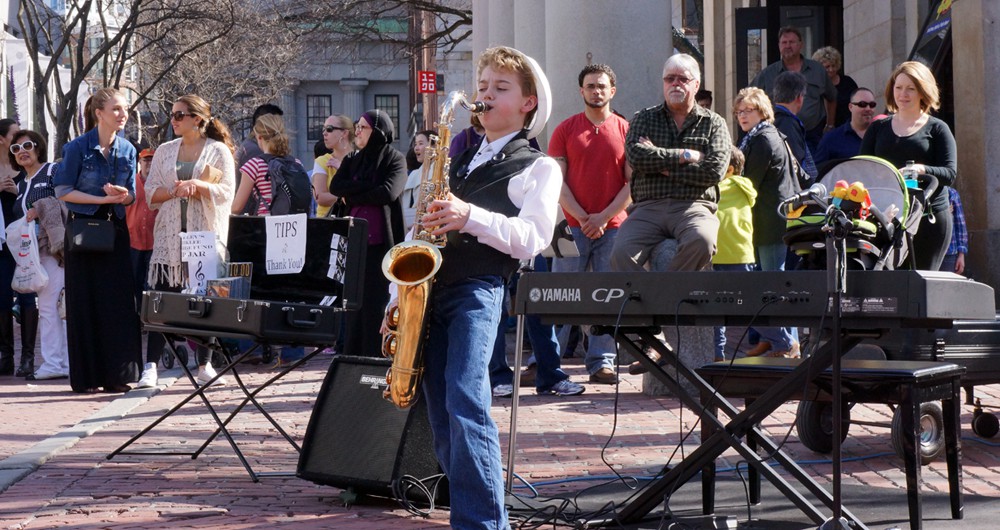 Bradley is about the age that Dave was when he got started. But you would never be able to tell if you were just listening to him on the radio. At 12, and a year into his busking career, he’s alarmingly proficient at his two main instruments—piano and tenor sax. And also already a total showman.

“My favorite types of crowds are the ones that have fun interacting during my performances by singing and dancing and just having fun. The bigger the crowd, the bigger the show!”

Like Dave, he doesn’t feel personally responsible for his oversized musical ability. “I’ve been playing the piano and singing since I was a toddler. It just comes very natural to me and everyone I meet calls it ‘a gift’.”

But that doesn’t stop him from enjoying it. “I love to play and compose and perform piano tricks…playing upside down or with my feet.” He also has a hat trick. “My hat trick is my signature move during my saxophone performances. Playing the saxophone over my head until my hat falls off and then picking it up with my foot and putting it back on my head without missing a beat.”

Though he composes his own songs (including a moody tribute to Menino called “A Mayor’s Heart”), a good deal of what he plays as part of “the Faneuil Hall Musician Busking Team” is snappy, upbeat covers of rock songs (think Jerry Lee Lewis with even more enthusiasm than Jerry Lee Lewis.) But Bradley also has a good grip on Gershwin and belts out the blues as if he’d had experience of them. He’s garnered the respect and mentorship of some of his idols as a result.

“I am very fortunate to be mentored by two world class musicians, Mitch Chakour and Deric Dyer.” Before their coaching he confides, “I was self-taught…jazz, blues and boogie.”

He’s also learning about audiences from busking and cites a lot of the same reasons for doing it that most adults do. “I have learned to choose the right song and instrument to energize the crowds, to make a positive difference and to make people happy.”

“One of the reasons that I love busking in Boston is that I just love to play and share my music for a lot of people and Boston gives me a new audience every 15 minutes.”

Compared to the stage performing he’s done, Bradley feels busking is “A more personal experience than performing on stage. You can meet and greet with your audience. I have made so many great friends from all over the world who I never would have met if it wasn’t for the great opportunity to perform at Faneuil Hall.”

He’s next generation—he keeps his sheet music on an iPad, and he’ll probably be an early adopter of some of the apps popping up that let buskers keep pace with a cashless society. Bradley has a website, a Youtube channel, and a Facebook page, which can all tell you exactly where to find him on any given weekend and other ways to hear his music.

As far as other buskers go, Bradley recommends Tori Beaudoin.“Not only is she extremely talented and musically creative but she is just so nice and she is able to connect with her audience just by being her sweet self.”

Enter to win a pair of tickets to attend The Hess Collection Seminar and Dinner as part of Boston Wine Festival 2018 at the Boston Harbor Hotel on Wednesday, March 14th. END_OF_DOCUMENT_TOKEN_TO_BE_REPLACED

Abe Rybeck, founder and Executive Artistic Director of The Theater Offensive was in studio this morning to talk about ClimACTS! Bounce, which celebrates art loud and proud at Royale on Wednesday, May 3. END_OF_DOCUMENT_TOKEN_TO_BE_REPLACED

Melanie Gillespie is an author and the founder of Mel O’Drama School of Acting in Milton. She was in studio this morning to talk about her latest book Darlene and the Drama Queen and how acting can help kids to develop confidence. END_OF_DOCUMENT_TOKEN_TO_BE_REPLACED

We’re not suggesting coconuts migrate, but we are suggesting that you see Spamalot at North Shore Music Theatre, two weeks only, September 27 through October 9. Click here to grab your tickets, and click “more” to hear my interview with Brad Bradley, who plays Patsy. END_OF_DOCUMENT_TOKEN_TO_BE_REPLACED

You know Dracut, MA native Scott Grimes from television’s American Dad and ER. You know Bob Guiney from The Bachelor and The Bachelorette. But did you know the two are teaming up to raise funds for the Dracut Performing Arts Program? END_OF_DOCUMENT_TOKEN_TO_BE_REPLACED

Boston band Funeral Advantage is Tyler Kershaw. And Tyler Kershaw had a fun childhood, so it seems. END_OF_DOCUMENT_TOKEN_TO_BE_REPLACED

Perry put me on to daephne and the album blew my mind. END_OF_DOCUMENT_TOKEN_TO_BE_REPLACED