For Local College Students, Small Tuition Increases Can Be an Enormous Factor 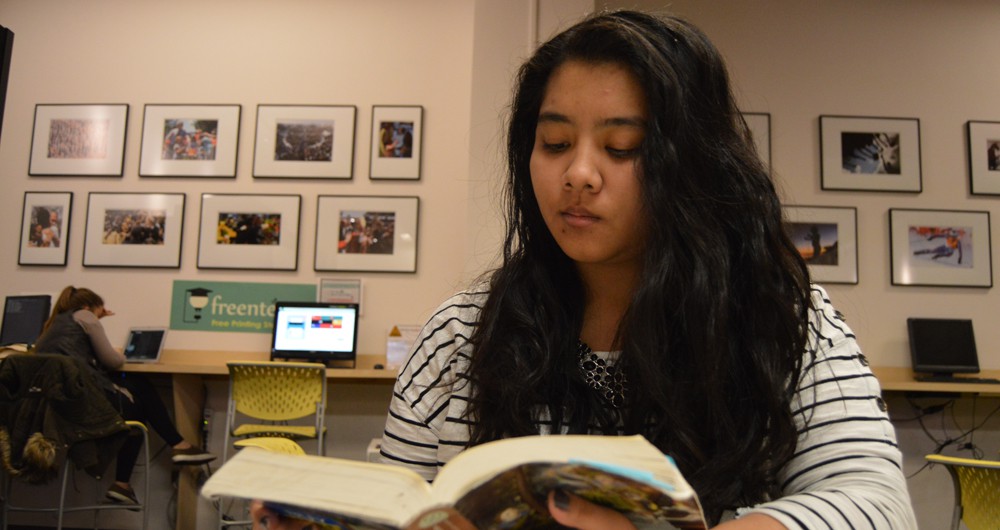 Just over two years ago, Shirley Eisenberger received an email that made all of her wildest dreams come true – she was accepted to her dream school: Boston University.

She had spent the past four years of high school working diligently to achieve superb test scores, a high GPA, and an impressive collection of extracurriculars. In fact, her application was so stellar that she received a Presidential Scholarship, an award that BU says is given to “approximately five percent of our incoming freshmen who demonstrate exceptional academic achievement.” But just over a year later, all of those achievements may not be enough to keep her dream in Boston alive.

Raised by a single mother, one of Eisenberger’s most pressing concerns about college, like many others, was the cost of college. Her $20,000 scholarship, though, made her dream a much closer reality. She left her small Ohio suburb and headed to Boston, the city she had dreamed of for years.

When she arrived in the Hub in the fall of 2014, BU turned out to be everything Eisenberger wanted it to be. She quickly got involved with student activities, including the university’s radio station WTBU, and began pursuing two undergraduate degrees simultaneously – one in English and the other in Communication Studies. Things were going well, until spring semester when she received an email from BU President Robert Brown outlining the tuition increase for her sophomore year. 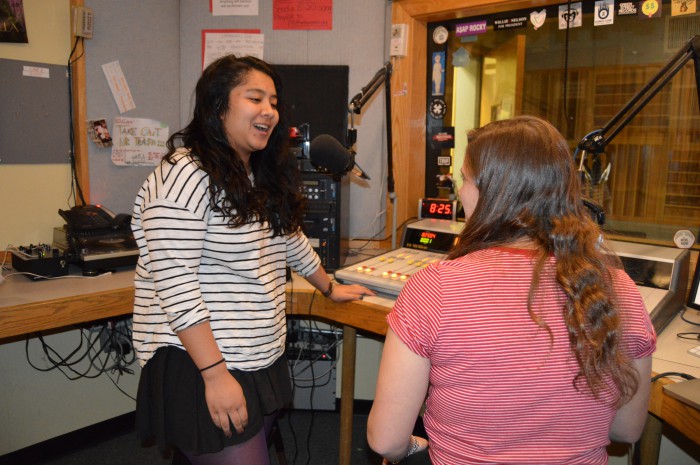 As a first-generation college student, Eisenberger was confused and shocked that her already high tuition was growing even larger. A few weeks ago, she was even more surprised when tuition increased yet again, an average of 3.7% for tuition and room and board.

For many students, an increase of around $1,700 does not seem like much when considering that the total cost for room, board, meal plans, and tuition at prestigious, private institutions like Boston University exceeds over $60,000 annually. But as tuition increases at BU every year, Eisenberger’s scholarship does not. Thus, the money to make up the cost must come directly from her pockets. For Eisenberger, those dollars could be the difference between her staying at BU or having to head back home to a less expensive school.

She isn’t alone in this plight. 75% of students graduating from private universities, of which there are many in Boston, graduate with some student loans, and those loans amount to nearly $30,000 on average, according to the Institute for College Access and Success.

Colin Riley, the Executive Director for Media Relations at BU, notes that the university’s administration has been working to “keep any increase as low as possible and have had great success in doing that for the past 15 years.” He also noted that typically, as tuition increases, students’ financial aid packages increase as well. However, he noted that the financial aid increases typically do not cover the entirety of the tuition increase, and that cost should be “shared three ways – between the students, the family, and the university.” 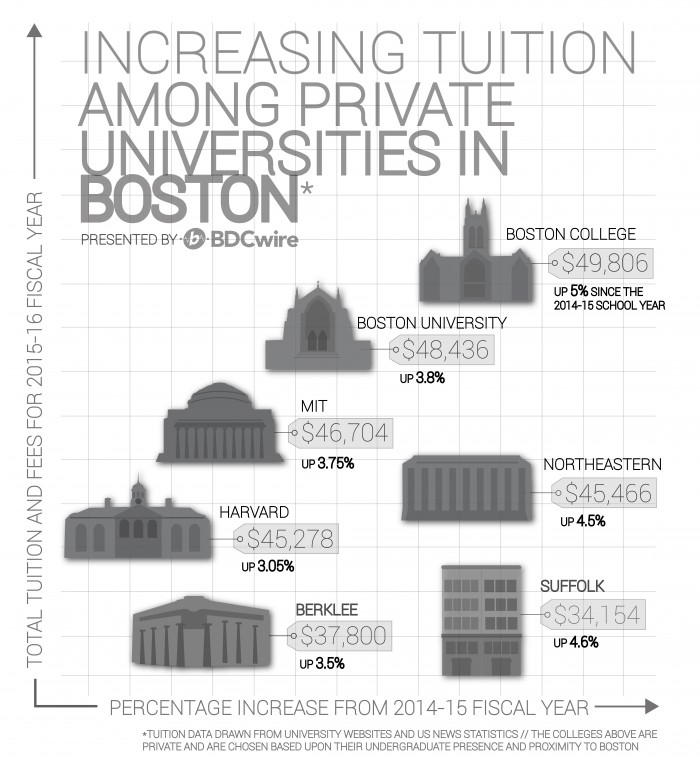 To resolve her dilemma, Eisenberger holds an office job at BU’s International Programs Office as a part of the federal work-study program, which allows students to hold jobs at universities to help pay for the cost of college. Again, this program does help Eisenberger, but it creates an interesting paradox – she is limited to working 20 hours a week at her job. Thus, as she continues to request more hours to help pay for the rising cost of tuition, she is denied the opportunity because of the weekly cap.

Eisenberger admits, however, that working 17 or 18 hours a week, which she does currently, can take its toll. This labor has affected her ability to get involved with other student activities and to focus on what she came to Boston to do – study. “I would be doing a lot better in my classes if I had more time to study and didn’t have to work so many hours,” she admits. 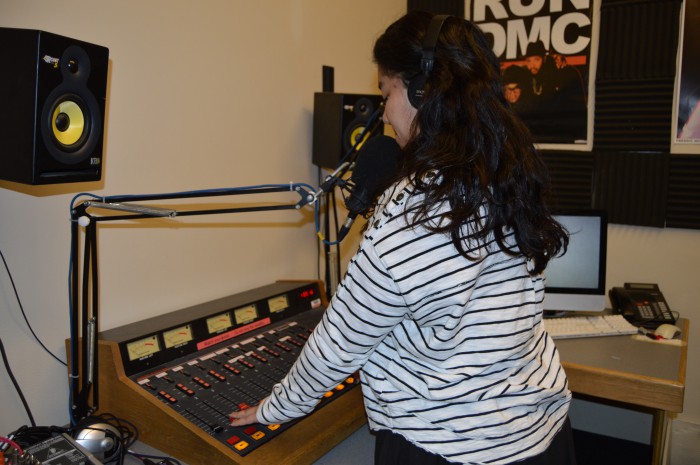 As Riley noted, the university does expect that parents will share at least some of the burden of the cost. For Eisenberger, this isn’t terribly comforting. “She does what she can,” she said. “Luckily, I have a small college fund, but as tuition increases every year, that fund is quickly running out.” Eisenberger also has a younger brother who is now considering college, but the financial burden is now weighing heavily on all of their minds.

Riley mentions that while tuition is costly, at least at BU, the average student graduates with $36,000 in loans that are to be paid over a 10 year period. Post-graduation, Eisenberger’s dream would be to continue to grad school and research different forms of media. In fact, she is most interested in BU’s Emerging Media Studies program. However, she knows that attending graduate school right away will not be a realistic possibility.

Both Eisenberger and Riley noted that the cost of tuition does not simply cover the cost of classes. Riley also says, “The sticker price is not what most students pay to attend school. In fact, more than half of our students receive need-based financial assistance.”

However, if BU is one of the more generous universities in terms of financial aid, Eisenberger’s story demonstrates that students are still struggling. And although Eisenberger attends BU, her struggle is not one isolated to Commonwealth Avenue. Students across the city, and around the country for that matter, are experiencing similar circumstances.

For now, Eisenberger plans on continuing her academic pursuits at BU. She works almost constantly, but remains involved in student activities. Additionally, she still appreciates the opportunities Boston University has given her. Still, she remains questionable as to where the extra money for next year’s tuition will come from.

Enter to win a pair of tickets to attend The Hess Collection Seminar and Dinner as part of Boston Wine Festival 2018 at the Boston Harbor Hotel on Wednesday, March 14th. END_OF_DOCUMENT_TOKEN_TO_BE_REPLACED

Boston band Funeral Advantage is Tyler Kershaw. And Tyler Kershaw had a fun childhood, so it seems. END_OF_DOCUMENT_TOKEN_TO_BE_REPLACED

Perry put me on to daephne and the album blew my mind. END_OF_DOCUMENT_TOKEN_TO_BE_REPLACED

END_OF_DOCUMENT_TOKEN_TO_BE_REPLACED

I’m in my mid-twenties, and I’ve been working as a substitute teacher for the last couple years (I joined Teach for America right out of college). I know some of the girls in classes I teach have crushes on me — high schoolers aren’t very subtle — but I brush it off, because I’m not an idiot. Last week, however, I got a disturbing email from a girl in the English class I subbed for. Pictures were attached. You get the gist. What do I do about this situation? I obviously haven’t responded, but I’m afraid she might go Lifetime-movie on me. END_OF_DOCUMENT_TOKEN_TO_BE_REPLACED