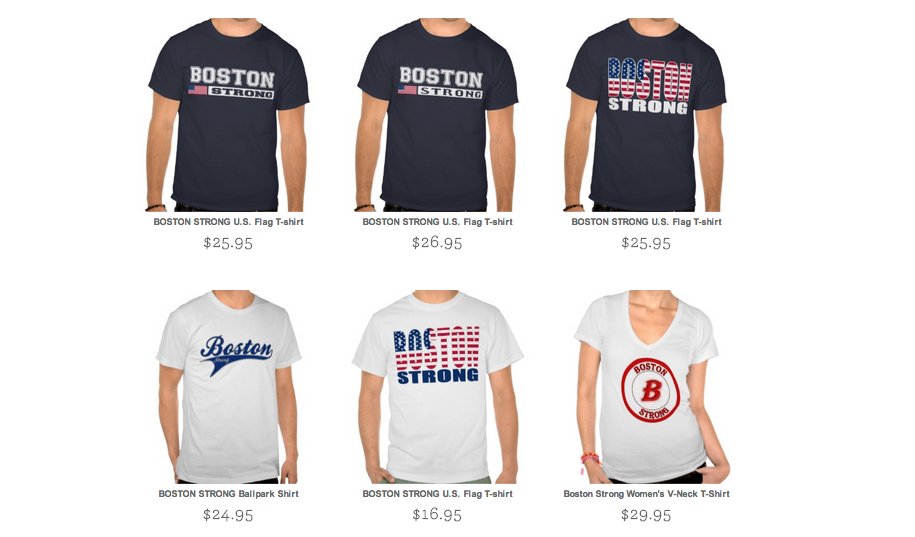 I’d say Boston is pretty strong. I mean, besides living through the Marathon bombings, it’s not a weak-willed people who can maintain the pride to cheer on a baseball team that didn’t win for 86 years or stay durable enough to live through winter every year. We’ve been strong since the 1600s. But the term “Boston Strong” went from comforting encouragement in the vein of “this, too, shall pass” in the aftermath of a week of hellish chaos to being a Yankee Candle scent. What does “Boston Strong” smell like? Fresh dollar bills.

When my colleague Wesley Lowery tweeted last night that “Boston Strong” had become commercialized, all hell broke loose on Twitter and apparently, in the Boston Herald newsroom. At the time, Marathon survivors were on the mound at Fenway Park, waving to cheering crowds in the stadium, and saluting viewers across the nation.

But the Marathon doesn’t define these people and it doesn’t define Boston. Jeff Bauman lost his legs and he’s put a heroic face on his tragedy since April, but he’s just a normal guy who went to UMass Lowell. Cowboy hat-wearing activist Carlos Arredondo, also present at Fenway last night, was a hero long before the Marathon, as a well-known organizer in many anti-war and Occupy circles with a tragic family history. This wasn’t the first time the two appeared together, having joined up during the Bruins postseason. It won’t be the last either. Throwing the first pitch or taking a slide on the ice doesn’t define what they say has become a meaningful friendship.

Certainly, these people deserve applause, appreciation, and admiration. But a $13 t-shirt? Probably not. Will the “B Strong” symbol that is branded into the outfield or the “Stay Strong” banner hanging off the outfield seats help the Sox win? No. It didn’t help the Bruins either, when that teams’ fans sought to possibly misappropriate the phrase in June.

As soon as “Boston Strong” stopped being associated purely with the Marathon survivors and instead morphed into commercializing literally everything – sports, clothing, music – that has the slightest association with the city, its meaning shifted, as well. And here’s the kicker: That’s OK.

I was at the Marathon. I was inside Forum when the bomb exploded on the sidewalk in front of the restaurant. As a citizen of Boston and Red Sox Nation and a person affected by the bombings just like everyone else, I’d rather the city band together to agree to repurpose the “Boston Strong” idea for tourism, sports marketing, or whatever other commercial use is appropriate than elevate it to false heights and revere it with some kind of bizarre idolatry.

If local sports teams want to use it on banners to sell tickets and boost fandom, FINE. If some enterprising guy wants to sell shirts on Zazzle and not donate the proceeds to the One Fund, he’s a douchebag, but FINE. And if Wes Lowery wants to emote on Twitter about our over-the-top obsession with preserving the imaginary purity of the “Boston Strong” slogan, FINE. But let’s not start a holy war over it.

Enter to win a pair of tickets to attend The Hess Collection Seminar and Dinner as part of Boston Wine Festival 2018 at the Boston Harbor Hotel on Wednesday, March 14th. END_OF_DOCUMENT_TOKEN_TO_BE_REPLACED

The Black and Gold continue their run tonight at TD Garden. END_OF_DOCUMENT_TOKEN_TO_BE_REPLACED

Who will make the Class of 2018? END_OF_DOCUMENT_TOKEN_TO_BE_REPLACED

It’s been awhile since we talked Black and Gold. END_OF_DOCUMENT_TOKEN_TO_BE_REPLACED

You’re going to wish you were in the Northern Alps. END_OF_DOCUMENT_TOKEN_TO_BE_REPLACED