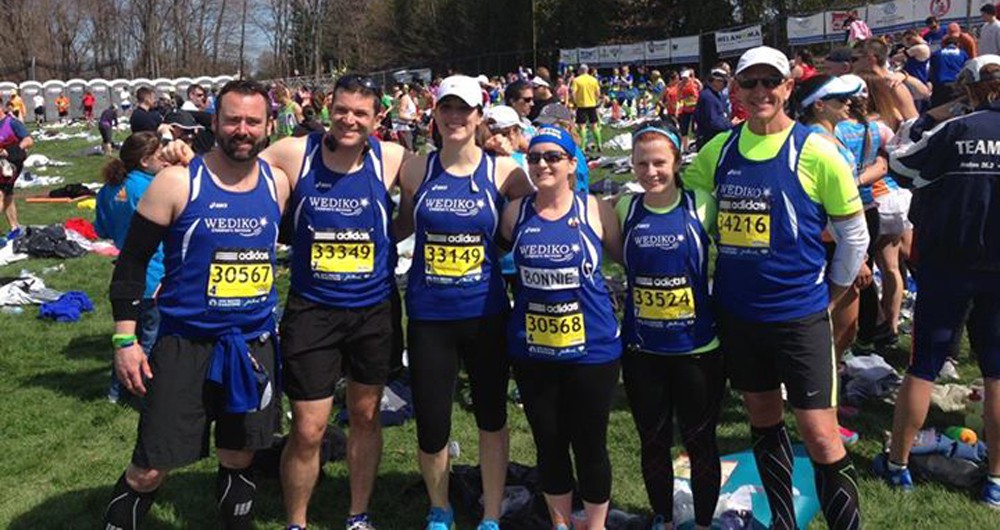 When fundraising for the Boston Marathon, many runners host barbecues and pancake dinners, while others auction off door prizes. Kurt Nelson likes to play games.

Nelson, a clinical specialist at Wediko Children’s Services, has run for the organization’s charity team in five Boston Marathons. This year’s race will mark his sixth, a momentous feat in and of itself. But it’s how Nelson raised money for the organization these past two years that really sticks out. He invited family, friends, and colleagues to play a game of tag.

Inspired by alumni from Gonzaga Preparatory High School in Spokane, Washington, whose 25-year-old game if tag went viral in 2013, Nelson created a unique, fun, and paranoia-inducing opportunity to raise money for his charity team.

Doug Delaney, a friend and co-worker, suggested the game as a fundraising idea after watching an ESPN report about the long-running cross-country game, aptly titled “Keeping In Touch”.

“It was so ridiculous,” says Delaney. “We have a ridiculous group of friends too, so I thought it’d be a fun way to raise money for Kurt and the marathon team.”

“A children’s game seemed like the perfect fundraiser for Wediko,” Nelson explains in an email. “It captures a lot about my organization’s work with youth, including the importance of playfulness, managing emotions, and problem solving.”

A Wediko veteran for almost nine years, Nelson immediately recognized the game’s relevance to his day-to-day workings with the Massachusetts Child Trauma Project. He also realized playing tag in a manner similar to the Gonzaga Prep alumni would be an altogether different and challenging way to raise money.

So how does it work? Players pay to play the game, which lasted for two weeks in 2013 and one week the following year. The second game was shortened “to give people’s nervous systems a bit of a break,” Nelson notes with a grin.

After a brief opening ceremony, each participant opened an envelope containing a note that either read “You’re it!” or “Run!” Only one was given the former. Everyone’s home and work addresses, travel information, and favorite hangouts were included as well. (Unlike the longtime friends in the viral story, not everyone playing in Nelson’s fundraiser had known one another for over two decades.) Once the ceremony concluded, the clock was set.

As evidenced by Nelson’s YouTube compilation video, visual documentation was required to prove and keep track of tags. “They had to send in pictures or videos of each tag,” Nelson explains. “Every player also kept a log of the amount of ‘it’ time they had.”

Special regular gatherings were also scheduled throughout the week to encourage players to hang out with one another. This increased everyone’s vulnerability, but it also scored points with Nelson’s system. Time spent at hangouts equated to time knocked off players’ “it” time, and the player with the least amount of “it” time at the end of the week was declared the winner.

“It turns friends into enemies. Some people even had to go back and apologize just for playing the game,” says Delaney. “But it’s a riot, and everybody knows they’re doing it for Kurt’s charity. That takes the edge off a little bit.”

The game proved highly successful for Nelson’s Boston Marathon runs in 2013 and 2014. However, this year he decided to play a different game.

“We’re condensing all the excitement, fear, and fun into one day with a game of Survivor, like the reality television series,” Nelson explains. “There will be a series of challenges in which teams compete. The losing team will have to vote someone off the island.”

For lack of an actual island to play on, the host’s apartment will serve as the game’s “island” during the day of the game. Different rooms will function as different sections of the game.

Participants voted off the island will be able to buy their way back into the game with additional donations to the Wediko charity team. At the end of the day, the winner gets a “grand survival prize” containing a mix of goodies.

Still, Nelson, Delaney, and the Wediko charity team’s supporters can’t help but feel a slight tinge of paranoia this time of year. Playing back-to-back games of tag will do that to a person. Then again, maybe they’ll decide to pick things up during the marathon itself.

END_OF_DOCUMENT_TOKEN_TO_BE_REPLACED

Enter to win a pair of tickets to attend The Hess Collection Seminar and Dinner as part of Boston Wine Festival 2018 at the Boston Harbor Hotel on Wednesday, March 14th. END_OF_DOCUMENT_TOKEN_TO_BE_REPLACED

The Black and Gold continue their run tonight at TD Garden. END_OF_DOCUMENT_TOKEN_TO_BE_REPLACED

Who will make the Class of 2018? END_OF_DOCUMENT_TOKEN_TO_BE_REPLACED

It’s been awhile since we talked Black and Gold. END_OF_DOCUMENT_TOKEN_TO_BE_REPLACED

You’re going to wish you were in the Northern Alps. END_OF_DOCUMENT_TOKEN_TO_BE_REPLACED