Boston Is Starting to Really Love It Some World Cup 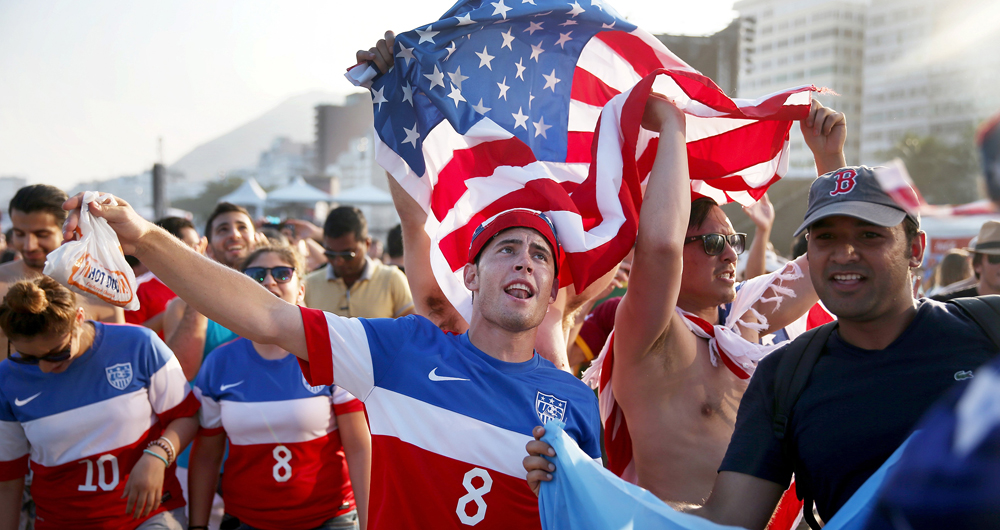 For a city consumed by its love (or hate, depending on the week) for the Red Sox and baseball, one might think it has no time for soccer. According to the ratings so far during the 2014 FIFA World Cup though, one would be wrong.

While it probably helps that the Sox are under .500 at the moment, Bostonians have been watching a whole lot of football as of late. The Hub averaged a 3.8 rating through the tournament’s first 14 matches, according to The Houston Chronicle. The only cities that have averaged more viewership heading into June 17’s fixtures were Washington, D.C., San Francisco and….New York. It’s alright being behind the nation’s capital and the Boston of the West but, yes, being behind The Big Apple is a tad disappointing. The only solution to this problem is to watch more soccer.

Even if a rival city might be watching more soccer than Boston so far, it’s clear that many have embraced the sport and tournament. People are flocking to bars like Phoenix Landing and Atlantic Beer Garden to watch their favorite teams with friends and strangers alike. Even more will be in attendance at The House of Blues this Sunday to watch the US take on Portugal with members of their hometown New England Revolution.

If you’re one of those debating going to the HOB and chilling with the Revs, just be sure to get there early. Boston came in as the No. 4 city in the country in terms of ratings for US’ opening win against Ghana. Yeah we drew fewer viewers than Hartford, but whatever. For that game, many, including the Globe’s Rachel G. Bowers, filled up The Banshee in Dorchester to hang with Boston division of The American Outlaws, the popular USA supporter group.

Many around the Hub might be falling in love with the beautiful game for the first time. In some ways though, these strong Boston World Cup ratings are highlighting the fact that this might be more of a soccer city than most of America thinks. Boston is a sports city, and while soccer might not be its favorite, it’s fairly well supported.

Both Arsenal and Liverpool FC of the English Premier League have Boston-based fan clubs that meet to watch games together around the city. Heck, John Henry, who owns the Globe, NESN and the Red Sox, owns Liverpool too. Revolution fan groups like The Midnight Riders, The Rebellion and La Barra have also likely seen an uptick in membership recently, as New England currently sits second in the MLS’ Eastern Conference rankings.

In more than a few ways, Boston is a soccer city to some degree. All of these supporter groups wouldn’t be in existence if the sport didn’t have some sort of foothold around here. The MLS likely wouldn’t have given the region of New England one of its 10 original teams if it doubted Boston’s ability to embrace soccer and a team to cheer for. Perhaps now more than ever, this city is welcoming the sport with open arms and is clearly enjoying the World Cup so far.

Enter to win a pair of tickets to attend The Hess Collection Seminar and Dinner as part of Boston Wine Festival 2018 at the Boston Harbor Hotel on Wednesday, March 14th. END_OF_DOCUMENT_TOKEN_TO_BE_REPLACED

The Black and Gold continue their run tonight at TD Garden. END_OF_DOCUMENT_TOKEN_TO_BE_REPLACED

Who will make the Class of 2018? END_OF_DOCUMENT_TOKEN_TO_BE_REPLACED

It’s been awhile since we talked Black and Gold. END_OF_DOCUMENT_TOKEN_TO_BE_REPLACED

You’re going to wish you were in the Northern Alps. END_OF_DOCUMENT_TOKEN_TO_BE_REPLACED