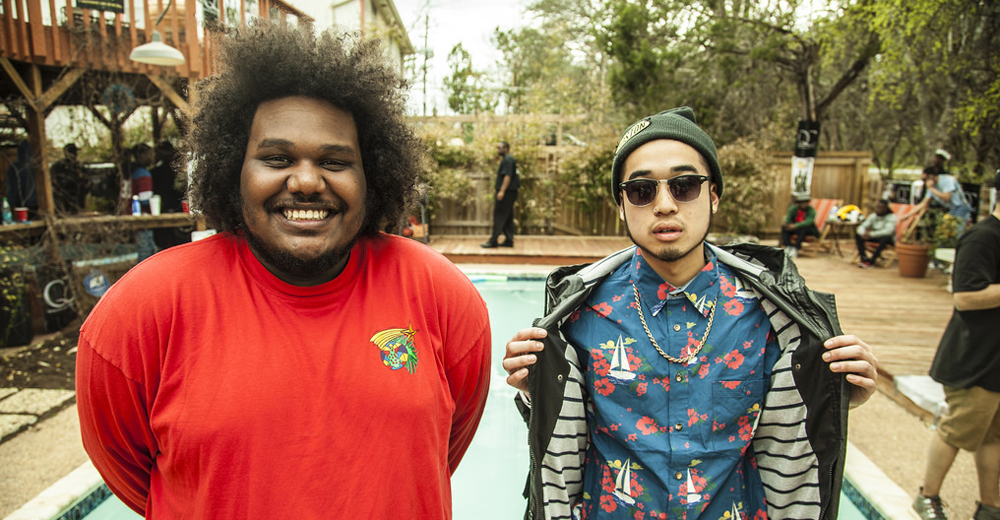 For the second year in a row, SXSW was more to me than just a week of warm music and better people. It was that, sure. Anyone who works in the music industry in any capacity knows SXSW is essentially a vacation you take with all your favorite people in the world, where all your internet friends morph into real life characters, and where the tacos are abundant and the beer is free-flowing.

But beyond that, SXSW is a benchmark that provides the perfect opportunity to measure growth and progression. And looking at it all from a Boston hip-hop perspective, things couldn’t be moving in a better direction.

When I made my first trip to Austin in March of 2013, I was a rookie in the music business. I still am, relatively at least, but it was different this time around. I recognized more faces, more faces recognized me and there were far fewer holes in my schedule. Just as I took personal steps forward in the 365 days since the last festival, so did the city I’m proud to be a part of. Conversations about the state of Boston’s hip-hop scene will inevitably continue for years to come, but at least during the week of SXSW, they weren’t even an afterthought.

For artists like Dutch ReBelle, Michael Christmas, Moe Pope and Natural – just part of the Boston representation that graced SXSW stages earlier this month – the age old adage, “Just shut up and work,” yielded favorable results. At some point, speculation and criticism needs to be replaced with action, and a slew of Beantown representatives did just that, simply by making the trip to Austin. In addition to the artists, Steady Leanin founder Jeremy Karelis, Karmaloop’s Derrick Cheung, and esteemed producer/studio owner The Arcitype – three key figures in the budding Boston scene – made their presence known as well.

While fun was had by all, the motives behind everyone’s decisions to attend SXSW related mostly to business, both on individual and city-minded levels.  “I love seeing Boston have a heavy presence at SXSW,” said The Arcitype. “The city has so much talent, it only makes sense that it be heavily represented. It’s not always easy to make happen, and it requires people to work hard and pony up the money to get themselves down there, but it’s important for the city as a whole because it really helps draw national attention to what’s happening in Boston right now.”

SXSW is unique in the sense that it provides national platforms – even if just small ones – for rising local acts. It takes hard work and strategy to earn the proper attention, but it’s an undeniable opportunity and an important career step that shouldn’t be overlooked. Part of the strategy, though, involves networking beyond city limits, something that’s difficult to do if you never leave town. Last year, I spent a significant amount of my time in Austin hanging out with a group of up-and-coming Chicago artists, many of which weren’t performing at all.  But traveling to SXSW just to be a part of the festivities and network with tastemakers paid off for all of those artists when they saw their names on show flyers this time around.

Natural was one of the few Boston-based artists that adopted that strategy last year and saw his on-stage appearances triple in 2014. It was the Bargang general’s second time attending South By, and he proved that a little dedication and desire to put on for the city goes a long way. “I showed up to a Duck Down Records event and [Lawrence, MA native] Statik Selektah happened to be spinning,” said Natural. “He was happy to see people from Boston and pulled me and Dutch ReBelle onstage to rock along with Reks and Termanology. He yelled out, ‘Hometeam!’ You know how awesome that feels?”

Being in the right place at the right time is an integral part of the SXSW equation, but seeing that “right places” are everywhere in Austin, just being down there often gives birth to unique opportunity. One of the right places was undoubtedly Steady Leanin’s “Lean Pizza” showcase, headed by Karelis. He’s grown his site’s brand immensely over the course of the past year, to the point that he was able to assemble a show lineup that caught the attention of FACT Magazine, which named “Lean Pizza” one of SXSW’s Top 10 showcases.

One performer who stood out on the bill was none other than Boston’s own Michael Christmas, a point of pride for the Steady Leanin crew. “We’ve grown on the internet a substantial amount since last year’s showcase and were able to put together a very diverse lineup that would still flow seamlessly and make sense to our fans,” said Karelis. “What made this year special for us, being from Boston, was to finally include a local act that would fit our showcase perfectly: Michael Christmas. It was great this year to see so many familiar faces from Boston succeeding in such a tough industry. The city and scene have come a long way in the past year, and it’s something we should all be proud of.”

What Karelis described is perhaps the most important collective upside of the growing Boston representation at SXSW. Seeing peers succeed with similar resources coming from a similar background is inspiring and creates an essential circulation of energy. Competition is a great thing, and when a number of artists from the same city are all at SXSW hustling to network and perform for as many new fans as possible, a little competitive edge arises. It has to do with setting bars where there are none, and after this year, it’s safe to say there’s a Boston bar set for South By in 2015.

Dutch ReBelle offered her insight: “This is going to change the local scene because it’s making everyone who didn’t go interested. I started the phrase ‘HomeTeam’ specifically for people from the city who represent in other cities and states. It feels great to see the growth of artists while they show and prove how important it is to expand.”

Natural added, “For Boston to see some of its own go and represent down in Texas is huge for perspective. A lot of young cats get caught up in the whole ‘Best in Boston’ thing. That’s backwards. Boston is just home base; the rest of the world is out there waiting. It’s been great seeing artists like Dutch ReBelle and Michael Christmas kill shit the past couple months and then seeing fans know them down at SXSW.”

The festival is certainly not the end-all, be-all. There are plenty of opportunities and avenues to make noise beyond Boston, and if you never get a chance to go, it’s not like that’s going to make it impossible to succeed in music. One thing everyone I spoke to seems to be on the same page about, though, is that it’s worth the effort, and both the individual and collective payoffs are all but guaranteed.

“Seeing younger talent from Boston in Austin was truly inspiring,” said Cheung. “These artists were performing in front of complete strangers from all over the country, and everyone was showing love. That’s what this whole rap thing [is about], and that’s why Boston needs more representation at SXSW.”

The Arcitype was on the same page and sees value in more artists joining the movement.

“Making noise in Boston is important and respectable, but trying to make a name for yourself nationally and bringing the city you come from with you is the goal in my eyes,” he said. “I think in some ways it helps bond the local artists together when we get back to Boston. There’s common ground and mutual respect that’s built from being out there together representing for our city.”

One of the highlights of the week came on the last night of the festival when our group – myself, local producer Goodwin, Christmas and DJ Oy Vey – ran into Arcitype, Moe Pope, Fran P and Esh The Monolith on a crowded side street next to a taco truck. An hour later, there was a crowd of Bostonians stageside at Club 512 as Christmas took the stage for his final performance. Though it wasn’t planned, it was a fitting end to the festival and yet another sign of an increasingly bright future for Boston hip-hop. It’s hard to say exactly where things are headed, but as long as they’re headed toward a slightly more promising place every day, there isn’t much to complain about.

“A hip-hop dream of mine?” said Natural. “A kid at one of these festivals points at a group of us and goes, ‘Man, those are those dudes from Boston. They got so many dope acts coming out of that city right now. They really got some shit. And they’re cool as hell to hang with.’”

Enter to win tickets to see Trio Da Kali at The Villa Victoria Center of the Arts (Newton, MA) on April 10th. END_OF_DOCUMENT_TOKEN_TO_BE_REPLACED

END_OF_DOCUMENT_TOKEN_TO_BE_REPLACED

Enter to win tickets to Rhye at The Paradise on February 28th. END_OF_DOCUMENT_TOKEN_TO_BE_REPLACED

Her new album has been pushed back, but we have Kimbra’s new single for you. END_OF_DOCUMENT_TOKEN_TO_BE_REPLACED

The folk duo returns with a new record this week. END_OF_DOCUMENT_TOKEN_TO_BE_REPLACED

Now that we’re done looking back at 2017, let’s look ahead at 2018. END_OF_DOCUMENT_TOKEN_TO_BE_REPLACED

Our first Song of the Week for 2018. END_OF_DOCUMENT_TOKEN_TO_BE_REPLACED

In a year when so many things were off, the music was right on. END_OF_DOCUMENT_TOKEN_TO_BE_REPLACED