Boston Halloween Events: Dining in the Dark, Day of the Dead, and a Doggy 5K 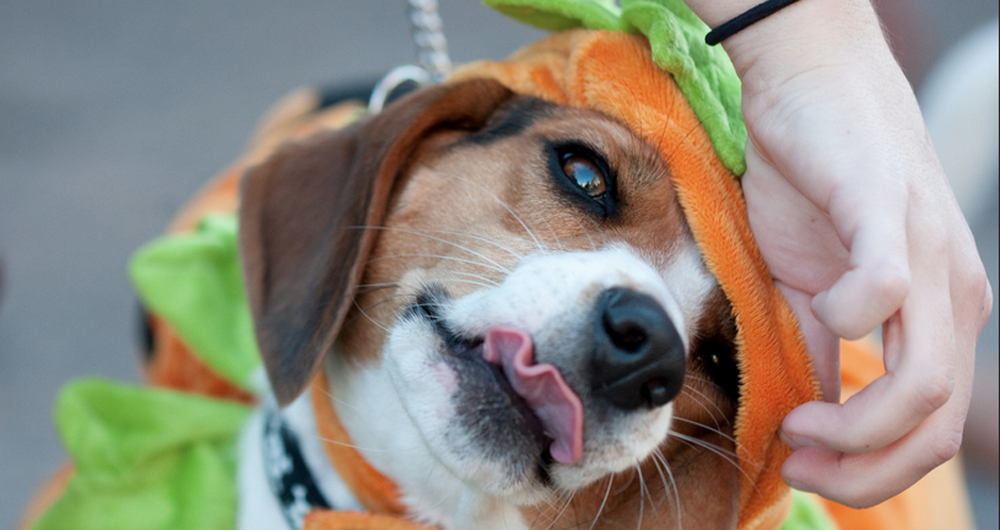 Tired of the Halloween house party scene? Sick of finishing just out of the medals in bar costume contests? There’s much more to do this Halloween weekend, so you don’t have to stay home and hand out candy to an endless parade of Elsas whose parents aren’t even much older than you and somehow can afford to own property in your neighborhood, and that is truly frightening.

River Bird Comics and Boston Comics Roundtable host a launch party tonight to celebrate the release of their Hellhound V: End of Comics anthology. Wait, are comics over? Where are we supposed to get source material for movies from regular books? Ha, good one. Those don’t even have pictures. The party features a costume contest, sketch fights, and complimentary refreshments, and by that I mean they’re free and also they’ll say you’re funny and good-looking and they really like that sweater, is it new? (6 p.m., FREE, all ages)
Opening Friday and running through March, the Vocal Vibrations exhibition at Cambridge’s new art and design center Le Laboratoire isn’t nominally a Halloween event, but come on, you’ve seen enough movies to know nothing good happens in a laboratory. The installation features specially designed objects that disembody (!) the vibrations provided by visitors’ own voices. You’ll listen to a Blue Heron Choir recording centered on a single meditative tone, then enter an intimate room containing a sensorial cocoon which closes around you as you hold the oRb, a magical ceramic sphere created at the MIT Media Lab. Then a stranger gives you a big, wet raspberry on your tummy. Or not, it’s all still pretty weird. (12 p.m., FREE, all ages)

Class up your Halloween with the Boston Ballet’s Black and White Masquerade Ball during Friday’s performance of “Swan Lake” at the Boston Opera House. Attend in your best black and white masquerade attire, grab a complimentary mask, and ask yourself: Are you an Odette or an Odile? Or for movie fans, a Natalie Portman or a Mila Kunis? The answer is obviously whichever one isn’t real-life married to Ashton Kutcher. (7:30 p.m., $29 and up, all ages)

Local bands dressing up and playing as other bands is my favorite Boston Halloween tradition that probably happens in every other city but let’s go ahead and claim Boston invented it, like we invented America. Some of this year’s highlights include Halloween at the Plough with Sleep Crimes (Blondie), Ghosts of Sailors at Sea (Fugazi), and Today Junior (Nirvana); T.T. the Bear’s Funkin’ Punkin’ Halloween with Solo Sexx (Salt-n-Pepa), Mumra (Primus), The Battleships Cometh + Hammer and Snake (Rage Against the Machine), The Kominas (The Ramones), and Lord Almighty (Turbonegro); and Vanyaland Halloween at Great Scott with Vary Lumar (Smashing Pumpkins), The Daily Pravda and Ruby Rose Fox (Lana Del Ray), and Pale Hands (Robyn!!!!!!). (Various times, prices, and ages)

What could be scarier than eating dinner in the dark and having no way of knowing if there are bugs in your food, or even worse, mushrooms? Part culinary adventure/part interactive theater, Dining in the Dark at Beacon Hill mansion The Hampshire House treats adventurous foodies to a four-course dinner tied together by a story and music, which hopefully isn’t just one guy somewhere in the room humming Springsteen’s “Dancing in the Dark” and can somebody turn on the lights and punch that guy, please? (6 p.m., $72, all ages)

Lew Bryson, author of “Tasting Whiskey: An Insider’s Guide to the Unique Pleasures of the World’s Finest Spirits” and Lauren Clark, author of “Crafty Bastards: Beer in New England from the Mayflower to Modern Day” host the Boilermaker Bar Crawl where you can learn so much about the very alcohol that’s causing you to black out and forget everything you learned. The journey matches bars with breweries and stops at Deep Ellum with Notch Brewing, Eastern Standard with Spencer Trappist, Stoddard’s with Harpoon, and finally State Park with good old Narragansett, because at that point you’ll just want to drink something that comes in tallboy form. (2:30 p.m., FREE, 21+)
It’s natural to crave chocolate around Halloween, so you buy a five-pound bag of Kit Kats for all the trick-or-treaters who might come to your fifth-floor walk-up apartment when you’re not even home anyways and hey, you can’t let those leftovers just go to waste. Instead, stop by Taza Chocolate’s annual Dia de los Muertos Celebration — that’s Day of the Dead if you don’t have Google Translate handy — featuring plenty of free samples, food trucks, a Slumbrew beer garden, and a mariachi band. Also face painters who can incorporate that melted chocolate that’s all over your face into some sort of design, so you can save it for later. (1 p.m., FREE, 21+)

Burn some calories to make up for all the Halloween candy you and your dog destroyed (obviously you only give your dog non-chocolate candy, you’re not stupid and Necco Wafers are gross anyways) at Franklin Park’s annual Doggy 5K Run. Or if your “dog” doesn’t feel like “running” because it’s “still drunk” from the night before, there’s also a one-mile walk option. Everyone can enjoy a Howl-loween party and doggie costume contest after the race. Don’t forget to bring poopie bags! (1 p.m., $25, all ages)