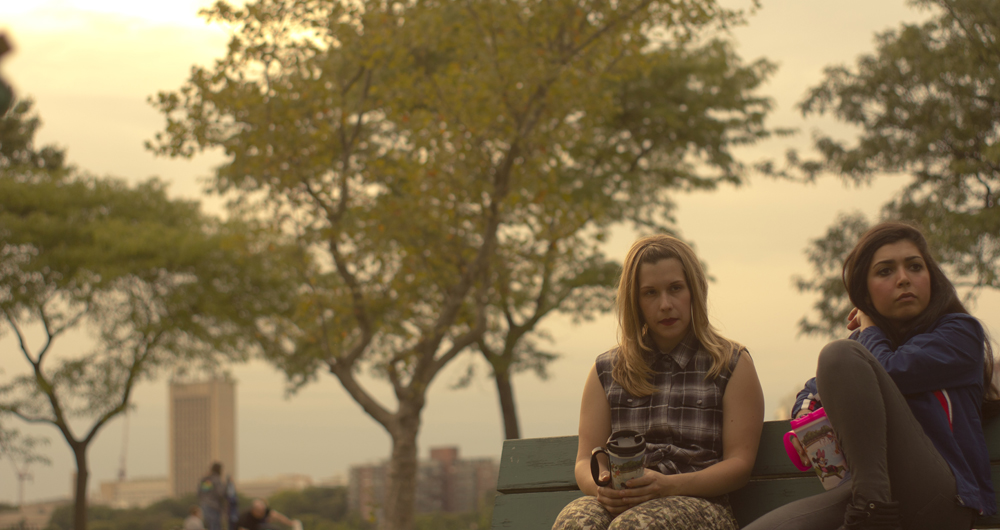 Is the upcoming web series “K&A”  Boston’s version of “Broad City”? The series’ trailer certainly suggests a similar vibe. Both shows feature two dynamic, twenty-something female leads as they navigate relationships and early careers. In the early marketing for “K&A,” its leads Karly and Alex are described as “dysfunctional, day drunk and doomed.” Considering the media’s recent infatuation with dysfunctional characters of Karly and Alex’s age, (“Girls,” “Broad City,” “The Mis-adventures of an Awkward Black Girl,” “Two Broke Girls,” “New Girl,” “For a Good Time, Call”…) the “K&A” arrival to the scene feels well-timed.

So what’s exciting about comedies starring women? Actress Audrey Johnson, who plays Karly in” K&A,” believes the energy between two female comedians can be especially infectious. “I’m a huge fan of female buddy comedies that hit every single male buddy trope, all the raunchiness, but with female actresses. You usually get male actors in those edgy, challenging roles.” When asked to sum up the show’s tone, Johnson calls “K&A” “sassy and crass.” Johnson’s co-star, Ashley Elmi, compares the writing in “K&A” to shows like “Veep.” “Also, this season’s ‘SNL’ has been one of my favorites ever,” Elmi says. “Kate McKinnon, man.” Promoting new comedic female voices, from Issa Rae to Abbi Jacobson and Ilana Glazer, works to broaden the scope of comedy across genres, and this is part of what “K&A” seeks to accomplish by releasing its episodes online.

“K&A” centers around the codependent friendship between two young women, one lesbian and one straight, and the show promises episode titles like “The Herps” and “Racist Wednesday.” Karly and Alex interact with priests, random bar hook-ups, and in what might be a show-defining scene, they receive a lecture on genital hygiene from an over-aggressive gynecologist.

Will a show about drug dependency and “dirty vaginas” reach a mainstream audience? Johnson thinks the show’s online format will only enhance its sense of comedic rebellion. She says, “When people watch content on the internet, they maintain a different perspective than when they’re watching television. That’s just a really fartsy way to say that a web series can be profane. On the internet we absorb and digest media in smaller doses, so ‘K&A’ had to be punchier. The writing is tighter, edgier and the jokes come faster.” Perhaps both actresses’ experiences in Boston-based improv have sharpened their comedic sensibilities.

Johnson says, “I really love the Master Classes at ImprovBoston, taught by teachers from all over the place.” Elmi, a current cast member of Improv Asylum’s NXT show and performer at ImprovBoston with her all-female improv team WNBA, is well-versed in Boston’s comedy scene as well. “Improv informed ‘K&A’ almost entirely,” Elmi says. “We improvised so much of the dialogue, and a lot of the amazing guest stars are improvisers that we’ve met and performed with onstage. Eric Lamonica, who plays a priest in an episode called “Detox”, completely improvised his sermon and it’s nuts. I can’t speak for everyone, but I’m pretty sure it was our favorite thing we shot.”

While the “K&A” cast and crew enjoyed filming at the Somerville church, they also enjoyed being on location at the Salem Police Department and in various bars around the city. “I wouldn’t have gone into The Franklin in Southie, but since filming there I’ve been back a few times to day-drink,” Johnson says. “This is going to sound weird, but my favorite location we’ve filmed at was a little apartment in Bay Village. I was filming a makeout scene, and we had like fifteen people crammed into this little room. I just thought, this is real-life Boston, just making out in someone’s apartment in 90 degree weather, at the end of the summer.”

In fact, “K&A” reflects a lot of truth about Boston. Its leads received their training in Boston schools, series creator Katie Shannon earned her Masters at Emerson College, and the project’s very existence reflects the changing face of Boston film. “We’re seeing new projects trickle down from recent policy changes,” Johnson says. “The energy in Boston film has a go-getter vibe, and non-union actors can perform in sketch groups, student films or plays all in the same city. There are less restrictions for working actresses here.” Elmi says working on ‘K&A’ has been a dream. “I consider myself extremely lucky to have been given this opportunity. ‘K&A’ came at a time where I was totally void of creative fulfillment. I’m excited about the effect it’s had on my professional mentality.”

We’re not sure what’s more exciting: a new show about intelligent young women who might be screwing up their lives, or the fact that ‘K&A’ represents a web series renaissance in Boston. Either way, Boston twenty-somethings should be stoked. ‘K&A’ is now in post-production and expects an April release.