Boston fans, a pitch to root for the UConn Huskies this weekend 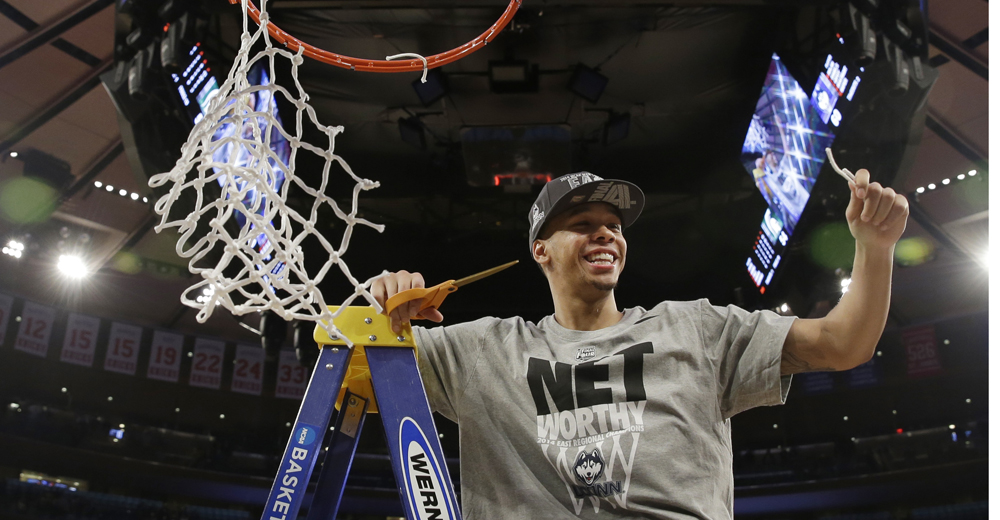 As great a sports town as Boston can be, it’s not a secret that we don’t have much time or affinity for ones of the college variety.

Every once in a while, a Doug Flutie or a Matt Ryan will show up at BC and the football team will garner a modicum of interest. And sometimes lightning will strike at the Heights and a hoop team like the Jared Dudley/Craig Smith-led Eagles, circa 2005-2006, will sneak into the Top 10 and work its way to a Sweet 16 appearance in the NCAA Tournament.

The folks out in Amherst have proven that on occasion, they too can capture the local imagination, as they did in 1996. It was then that the Marcus Camby-led Minutemen advanced all the way to the Final Four before losing and ultimately vacating the appearance thanks to the oozing sliminess of John Calipari, who ran for the hills before any of his misdeeds could catch up to him while leaving the program in flames in his wake.

Our city college hockey teams routinely make waves on the national level, with BU and BC combining for 45 Frozen Four appearances, including one for this year’s Eagles, each winning five National Championships. All tremendous accomplishments, to be sure.

But if you’re a basketball geek like me, the pickins are pretty damn slim. Which is why, with the Final Four set to tip off tomorrow night in Dallas, now is as good a time as any to implore you to do what I did when I was 14 and watched Tate George hit that buzzer beater against Clemson in the Sweet 16– embrace the University of Connecticut Huskies. They may not be local. But they’re local enough.

UConn got to this point, its fifth Final Four since 1999, as a 7-seed, beating Top 15 teams Villanova, Iowa State and, most impressively, Michigan State. These Huskies look in some ways like the 2011 squad, which won longtime Hall of Fame coach Jim Calhoun his third national title in 12 years by riding on the shoulders of point guard Kemba Walker. This year, it’s another mighty mite of a star guard in Shabazz Napier leading the way, and that’s where the local angle really kicks in.

Napier is a senior who projects to be a fine backup point guard in the NBA. He grew up in Mission Hill and starred at Charlestown High under the tutelage of the great Steve Cassidy. The Townies retired his number in early February and now, just over two months later, he’s on the verge of his second national title, having served as an integral part of that 2011 team as a freshman reserve.

Napier, who is on pace to be this tournament’s Most Outstanding Player should the Huskies defeat No. 1 overall seed Florida tomorrow night and then the winner of the Kentucky/Wisconsin semifinal on Monday, is averaging 23 points, six rebounds and 4.5 assists per game in the tourney, making 14 of 31 three-pointers along the way. He almost single handedly won UConn’s second round game against Villanova and dropped 25 points on MSU in the Elite Eight. Napier’s story represents a classic case of local boy makes good and it doesn’t hurt at all that he’s such a likable kid and so easy to root for.

UConn has its work cut out against the Gators, who only lost two games all season, the last one all the way back on Dec. 2. It’s probably worth noting here that this loss came at the hands of none other than UConn (which won on a buzzer beater by… guess who?), but that shouldn’t have too much bearing on tomorrow night’s game. Florida has a great point guard of its own in Scottie Wilbekin yet what could prove to be most troublesome for the Huskies in this matchup is the Gators’ frontcourt, a trio of seniors who are far more seasoned than what UConn has to offer. Huskies junior forward DeAndre Daniels, who went for 27 on 10-for-15 shooting in the Sweet 16 win over Iowa State and can operate from the perimeter as well as in the paint, will likely have to step up and produce a big game if UConn is to survive and advance.

However the next three days unfold for UConn, there’s no question it’s still one of the biggest, most powerful programs in the country, even after Calhoun’s departure. Second-year coach Kevin Ollie, who starred at the point for Calhoun during the early years of the program’s rise to national prominence, then spent 13 years as a solid NBA journeyman for a whopping 12 different teams, was around for the 2011 championship. Having served as an assistant on Calhoun’s staff from 2010-2011, along with his expansive playing career and his innate ability to connect with Napier, all factors into why he’s the ideal coach for this group.

See? There’s plenty of reasons to adopt the Huskies as the de facto hometown team and that’s without even getting into UConn’s first two national title teams, the first of which pulled an amazing, most unlikely upset of mighty Duke behind Rip Hamilton and Khalid El-Amin to give Calhoun his first championship back in 1999 and the second of which was an absolute wagon led by Emeka Okafor and Ben Gordon in 2004.

UConn also boasts one of the most consistently dominant women’s programs in the country, having won eight national titles since 1995, and currently gunning for No. 9 with a national semifinal of its own set for Sunday night at the Women’s Final Four in Nashville. It’s pretty much basketball heaven down in Storrs.

This is a pro sports town through and through. But there are avenues on which to branch out from that and the best, most exciting, most fun one sits just about 85 miles down the Pike and I-84. Even if you’re not a hopeless hoops junkie like me, even if you’re as parochial toward the local pro teams as it gets, you should still give the Huskies a try.

Tomorrow night at 6 at Cowboys Stadium is your next, best chance.

The Black and Gold continue their run tonight at TD Garden. END_OF_DOCUMENT_TOKEN_TO_BE_REPLACED

Who will make the Class of 2018? END_OF_DOCUMENT_TOKEN_TO_BE_REPLACED

It’s been awhile since we talked Black and Gold. END_OF_DOCUMENT_TOKEN_TO_BE_REPLACED

You’re going to wish you were in the Northern Alps. END_OF_DOCUMENT_TOKEN_TO_BE_REPLACED

END_OF_DOCUMENT_TOKEN_TO_BE_REPLACED

Bill might be “on to Tennessee,” but we’re not. END_OF_DOCUMENT_TOKEN_TO_BE_REPLACED