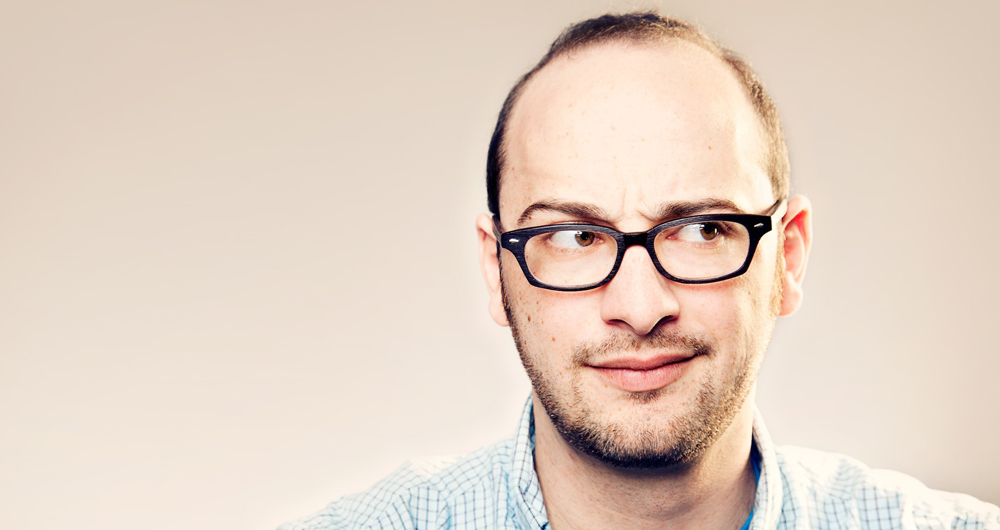 The holidays are supposedly the most wonderful time of the year. Yet with holiday shopping starting earlier every year, the bitter cold and familial stress, it is often hard to be merry this season. Luckily, to help cure the holiday doldrums with some laughter we reached out to comedian Josh Gondelman for his advice on how to get through the holidays.

You may be familiar with Gondelman through his work as a web producer for HBO’s Last Week Tonight with John Oliver and for co-creating the uber popular and must-follow Modern Seinfeld twitter handle. His comedic stylings can also be seen in Esquire Magazine and McSweeny’s.

Besides growing up in the area, Gondelman also attended Brandeis which gives gravitas to his expert opinion on how to get through the holidays in Boston.

You live in New York City now, a place that is often viewed as a semi-mythological place for the holidays, but Boston also has a picturesque holiday season. What are some of the differences you have noticed between the two cities?

Boston is so cozy. In New York, I’ve barely noticed the holiday season because I’m underground all the time, and I haven’t had to go near where the big stuff is happening. I saw pictures of the tree in Rockefeller Center, but you could see those pictures in Dubai or on the moon too. In Boston, everything’s on top of everything else so it’s unmissable. I like that.

Any memories about holiday shopping in Boston where you ran into that stereotypical Boston attitude?

I don’t, but I wish I did! I love Bostonian aggression. When I was opening for Gary Gulman earlier this month, we were discussing how Boston’s motto should just be: “YOU THINK YOU’RE BETTER THAN ME?”

As a Jew, do you have how to deal with Christmas advice for other Jews? Like what is the best thing to do on Christmas day?

Get to the movies early! Apparently it’s not just for Jewish people anymore. By the afternoon, the theater is even more crowded than most days.

Stereotypically most Jews go get Chinese food on Christmas, did your family do that growing up?

Oh yeah. We still do. I come back every year and do the typical Jewish Christmas. It’s a good time to visit my parents because nothing else is happening. We all have free time to spend together. Christmas is a lovely time for Jewish families because there’s opportunity without expectation.

Any sensational tales of spinning the dreidel?

Here’s the dirty secret of Hanukkah: “Dreidel isn’t that fun.” It’s like Monopoly. It’s an endurance exercise of a pastime that ends when the participants can’t stand it any longer.

Can you give insight on your dad’s conspiracy theories regarding egg nog?

My dad just told me a conspiracy theory about egg nog. He is going to be whimsical as hell by the time he's 80.

Oh yeah! He thinks that the brand of egg nog he buys uses three different recipes throughout the year. One before Thanksgiving. One from Thanksgiving until Christmas. A third after Christmas. He is CERTAIN about this. I can neither confirm nor disconfirm.

What is the proper behavior at holiday office parties?

Don’t get so drunk that you will be the most memorable part of the party.

See Gondelman open for Jen Kirkman at Laugh Boston right after Christmas and for John Oliver at The Wilbur on December 30th and New Year’s Eve.

Enter to win a pair of tickets to attend The Hess Collection Seminar and Dinner as part of Boston Wine Festival 2018 at the Boston Harbor Hotel on Wednesday, March 14th. END_OF_DOCUMENT_TOKEN_TO_BE_REPLACED

Comedian Myq Kaplan is a comedian named Myq Kaplan. He joined me in studio this afternoon, and he’s at Laugh Boston this weekend. Click here for tickets. END_OF_DOCUMENT_TOKEN_TO_BE_REPLACED

My goodness, I love Sue Costello. It was great having her back in studio today to talk about her one-woman show, #IAmSueCostello, playing tonight at the Revere Hotel. Click here for tickets. END_OF_DOCUMENT_TOKEN_TO_BE_REPLACED

Trump Takes On…Boston! is running now through election night at Laugh Boston. David Carl was back in studio this afternoon to talk about bringing Donald Trump to the stage, the cathartic element (for both him and the audience) and how audiences have been reacting so far. END_OF_DOCUMENT_TOKEN_TO_BE_REPLACED

Trump Takes On…Boston! has arrived at Laugh Boston. I had comedian David Carl, who is portraying Trump, in studio this morning to talk about the show. END_OF_DOCUMENT_TOKEN_TO_BE_REPLACED

Lachlan Patterson made me laugh this morning. Let him make you laugh this weekend at Laugh Boston. Click here for tickets, and click “more” to hear our conversation. END_OF_DOCUMENT_TOKEN_TO_BE_REPLACED

It was great to have Alonzo Bodden back in the RadioBDC studio this morning. Don’t miss him at Laugh Boston this weekend! Click here for tickets and info, then click through to hear my interview. END_OF_DOCUMENT_TOKEN_TO_BE_REPLACED

You know him from Bar Rescue, so see him at Laugh Boston this weekend. Comedian Owen Benjamin was in studio this morning with his dog Ben. Catch him Friday night at 7:30 or Saturday night at 7:30 and 10. Click here for tickets, then click through for our chat. END_OF_DOCUMENT_TOKEN_TO_BE_REPLACED