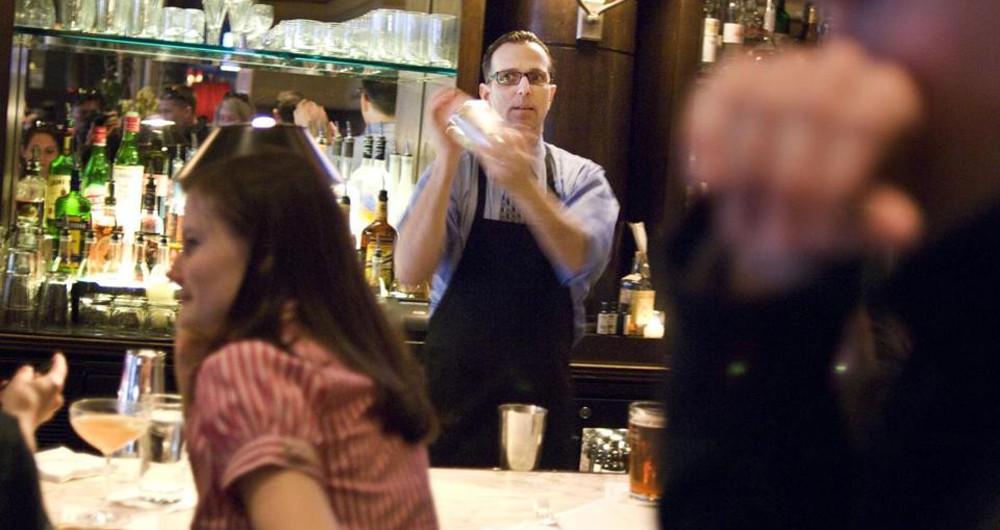 David Cagle’s favorite drink is the sazerac. So much so, that when anyone who sits at his bar says they’re unsure of what to get, Cagle immediately begins preparations for one. Born in New Orleans, the sazerac is a sweet combination of rye, sugar and bitters that has emerged as a standard drink on most bar menus throughout the country. Those of us living here in 2015 are spoiled by the rise of the craft cocktail culture in the past decade. Prior to the late ’90s, one would be hard pressed to get anything more elegant than a Long Island Iced Tea at most bars.

“In the ’90s I was drinking beer. There was no cocktail scene,” Fred Yarm, bartender at Russell House Tavern and author of the book Drink and Tell: A Boston Cocktail Book, said.

En route to scout locations for a potential new restaurant, Cagle, who was the general manager of Deep Ellum in Allston, explained what it meant to have a cocktail before the craft cocktail trend started.

“You would go into a bar and ask a bartender for something like a sazerac and he would have no idea what you were talking about,” Cagle said. “People were only looking for something sweet to go with their liquor– it was all Cape Codders and Cosmos or Sex on the Beaches back then.”

Cagle broke into the Boston bartending scene in 1998, after his cousin Patrick became the floor manager at the B-Side Lounge. Considered the place where it all started, most bartenders in Boston will cite the B-Side as the origin of craft cocktail in Boston.

“I would have loved to go back and have a seat at the B-Side Lounge,” Ran Duan who runs the Baldwin Bar at Sichuan Garden II in Wouburn said. “It’s my understanding, from everyone I’ve spoken to, that it was kind of the mecca for all of this. That’s where everyone used to drink at before this whole influence started. Jackson [Cannon] used to drink there before he even knew anything about bartending, and it’s from here that everyone went and started their own thing.”

Cocktail making in the United States had been a staple of American drinking culture throughout prohibition when it became markedly more difficult to acquire high quality spirits. Bartenders at speakeasies sought to lessen the blow to the taste of the liquor by making creative use of juice and bitters to make the drink appealing. Thus emerged such classics like The Last Word, the Sidecar and the Bee’s Knees. Though Prohibition sparked the creation of many cocktails it also caused a flight of underground bartenders who sought safer and better job opportunities abroad. Cocktails declined in popularity until the late 1990s, and it is during this time that the team at the B-Side Lounge first opened its doors. 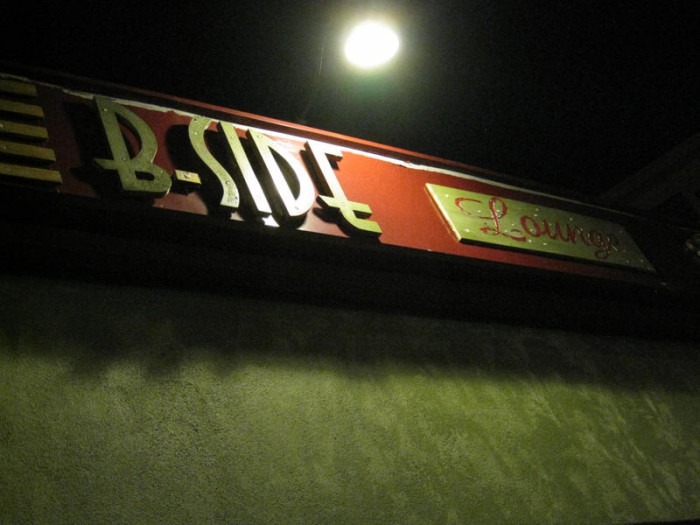 Joe McGuirk and Patrick Sullivan were the sharp thinking men behind the bar, and they put together a team that quickly became well known amongst industry veterans. Word soon spread throughout the city that they were putting together drink lists unseen in Boston.

“We went back to the old ‘Savoy Cocktail Book’ and started looking up recipes we liked and haven’t been seeing. There wasn’t anybody using fresh juice in cocktails, using jiggers to properly measure things and we were making drinks that it seemed like everybody had been waiting for.”

Quickly becoming the central spot for anybody in the restaurant industry, it soon attracted the likes of bartenders John Gertsen and Jackson Cannon. Cannon and Gertsen would become influential in advancing what those at the B-Side had started. Going on to restaurants No. 9 Park and Eastern Standard respectively, the two would become instrumental in grooming the next generation of bartenders and owners after them.

In 2003, Cannon helped open Eastern Standard which radicalized the way those in Boston looked at the art of cocktail making.

“When Eastern Standard opened, it took everything we were doing to the next level. Jackson really brought an appreciation for the use of hospitality in making cocktails and was really going back to the lost art of the hotel bar,” Cagle said.

Cannon who also opened Island Creek Oyster Bar and The Hawthorne became famous for his emphasis on hospitality and classic cocktails that became staples of his bars.

“Hospitality is probably the most important part, for me, about being a bartender,” Cagle said. “Jackson’s bars really show that. The bartenders are smart, but also able to educate you in a way that’s not pretentious.”

Cannon began gaining momentum in the Boston restaurant industry after helping to form the Jack Rose Society, a group dedicated to the art of preserving classic cocktails. Bringing this with him to Eastern Standard, Cannon would be instrumental in bringing craft cocktails out of the books and onto the bars. According to Jared Saidoan, lead bartender at Kirkland Tap and Trotter and Cragie on Main, Cannon seemed to be defying some of the national trends that were emerging in craft cocktails scenes around the country. 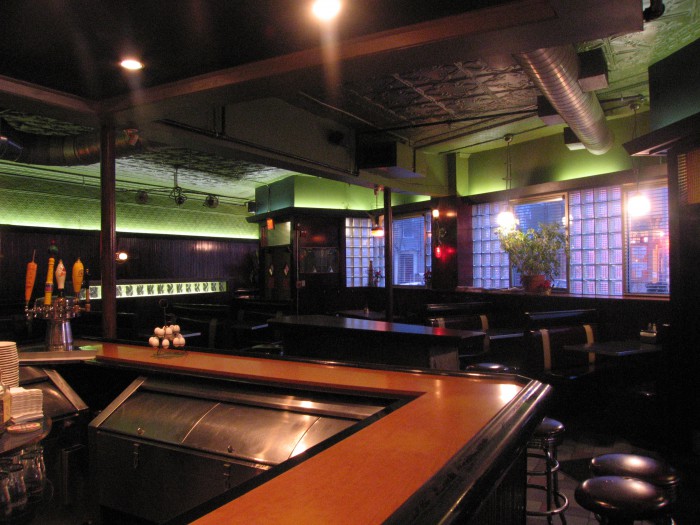 “I see places like Drink being more dictated by the trends that were happening in Chicago and New York and Jackson was marching to the beat of his own drum.” Saidoan said.

Along with Cannon, John Gertsen who helmed the bar at No. 9 Park, went on to inspire the next generation of bartenders in Boston. Yarm fondly remembers that the first time he met Gertsen at No. 9 Park he was dressed as a Carthusian Monk in honor of a liquor tasting being held at the restaurant.

According to Duan, working at Eastern Standard or No. 9 Park was like receiving an Ivy League education in the cocktail making and bar management.

“It’s really interesting to see where their disciples have gone and what they’ve done after working with Jackson or Gertsen,” Duan said. “You can go into a certain bar and tell that it’s a disciple of Jackson or Gertsen who’s running the bar.”

What makes the styles of the two so unique? Cagle says Cannon has always placed a premium on good hospitality. In his eyes, Cannon’s bars and those of his disciples are staffed with bartenders seeking to provide the best experience to the customer. This isn’t to say that Gertsen was not focused on hospitality as well, however, some would say Gertsen’s strength was in the mastery of his craft.

“Now, a lot of cocktails will have all of these things like green chartreuse, yellow chartreuse and all of these ingredients,” Yarm said. “John had a way of making you intrigued by all of his cocktails like a sazerac, he would know how to make every variation of it, and could keep you very captivated by it all.”

In the wake of Eastern Standard and No. 9 Park, advanced cocktail menus started springing up throughout Boston and Cambridge with bars such as Drink, Deep Ellum and Brick & Mortar opening their doors in the last decade. Cocktails are seemingly experiencing a second renaissance, but it leaves one to wonder what the industry can keep churning out to stay new and fresh. Cagle would like to see a return to form and is not as intrigued with the new recipes coming out of some bars today. 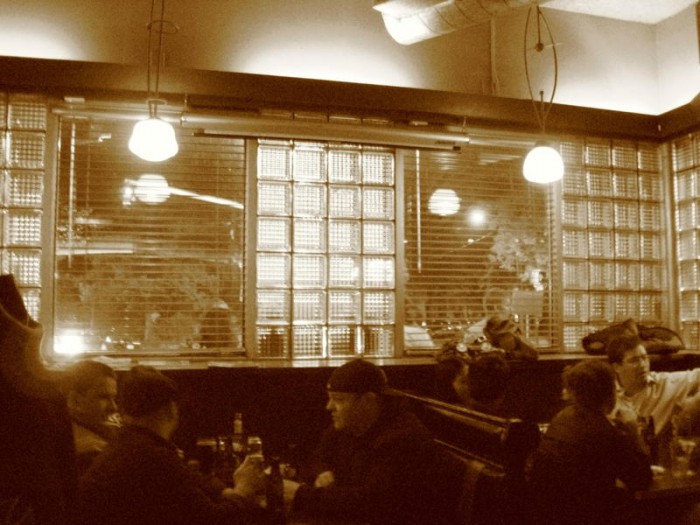 Sadoian thinks there can be a blend of both hospitality and fresh recipes. He looks at what Seth Friedus, the bar manager of Alden & Harlow, has done with his bar.

“You can go to a bar that’s serving sort of weird and esoteric drinks and still come out feeling comfortable and at home. Seth’s menu has some more unique cocktails in there, but also a lot of things that would be appealing to your average consumer,” Sadoian said.

For Sadoian, his biggest concern is the influx of new restaurants and bars that are opening and the lack of bartenders to staff them.

“There’s something to be said about the importance of being a bar-back and learning the trade that way. To be a truly great bartender you need experience,” Sadoian said. “Too many places seem to be opening and I’m wondering if we’re missing a good training opportunity.”

Despite this concern, Sadoian is excited to see how much the role of the bartender has changed.

“Bartenders used to just be these people who shuttled food from the kitchen to the bar, but now people are interested in cocktails and coming to places just for that, and that’s been great.”

Earlier this week, Duan won the United States Bartenders Guild Legacy Cocktail Showcase,securing a trip to Australia where he will represent the US in the Global Legacy Competition in May. There is no stronger example than Duan to demonstrate how far the art of craft cocktail in Boston has come, and with bartenders like him in the area its no surprise the scene is only expanding.

Enter to win a pair of tickets to attend The Hess Collection Seminar and Dinner as part of Boston Wine Festival 2018 at the Boston Harbor Hotel on Wednesday, March 14th. END_OF_DOCUMENT_TOKEN_TO_BE_REPLACED

It’s been a crazy week with all the snow. We need a drink. END_OF_DOCUMENT_TOKEN_TO_BE_REPLACED

Amazing sandwiches for a good cause? Make a bunch for us! END_OF_DOCUMENT_TOKEN_TO_BE_REPLACED

And they came to our studios, too! END_OF_DOCUMENT_TOKEN_TO_BE_REPLACED

It’s almost time send off 2017 and welcome in 2018, and we have some ideas about how you can do precisely that. END_OF_DOCUMENT_TOKEN_TO_BE_REPLACED

The pics alone will make you want to make a reservation. END_OF_DOCUMENT_TOKEN_TO_BE_REPLACED

Some people love cooking for the holidays. Others, not so much. END_OF_DOCUMENT_TOKEN_TO_BE_REPLACED

There’s so many to keep track of, you might have missed this one. END_OF_DOCUMENT_TOKEN_TO_BE_REPLACED

Looking to add a little more “cheers” to your holiday cheer? Pabu can help you. END_OF_DOCUMENT_TOKEN_TO_BE_REPLACED