Boston Biking: In Defense of the Scofflaw Bicyclist 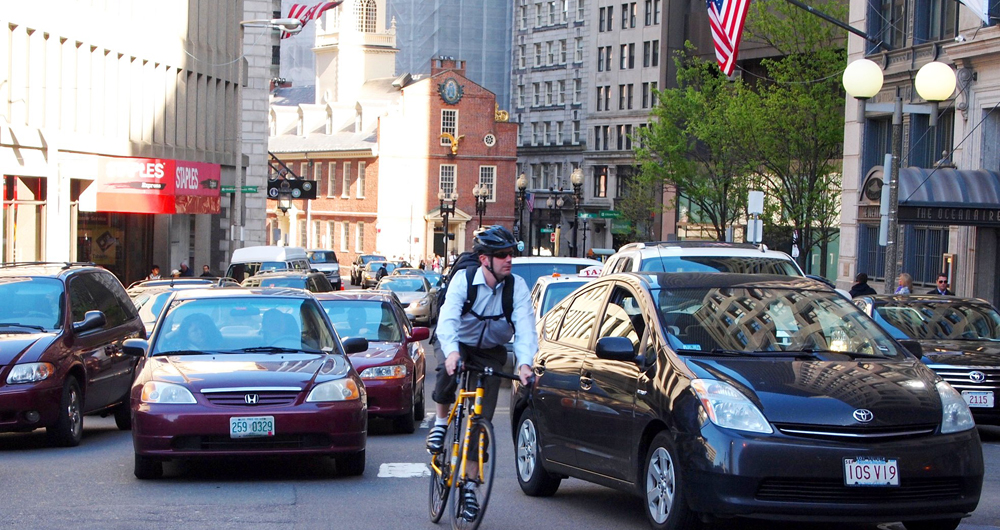 Tomorrow morning in Kenmore Square, the city will ignore thousands of dollars only it can collect.

On the Fenway Park side of Boylston Street, traffic will grow more disordered than Mike Napoli’s beard. Cabs and semis will idle in the bike lane, bellhops will dawdle in the street, and drivers neglecting blinkers will surprise roadmates with sudden, verboten maneuvers.

Bikers like me will break the rules too—and lots. By the hotel where gamblers and ballplayers fixed the 1919 World Series, they’ll ride on the sidewalk. To get ahead of dangerous traffic, they’ll run the red by Storrow Drive.

“WE DON’T PITY CYCLISTS BECAUSE they’re rule-breakers,” drivers say. “Until they shape up, we don’t owe them a thing.”

But right now, urban cyclists would be crazy to follow all the rules, because the rules don’t protect them.

Ideally, the rules of the road should promote safety and efficiency. But there’s nothing safe and predictable about riding next to a driver transfixed by her phone, or alongside a cabbie who drives 85 hours a week, or on the same road as Massholes who hate speed limits like they hate P.K. Subban.

At any given moment when it’s daylight in the U.S., about 660,000 Americans are using cell phones or electronic devices while driving, according to data from the U.S. Department of Transportation.

And every year, 1.4 million Americans are arrested for driving under the influence of drugs or booze. That’s just one percent of the 112 million alcohol-impaired drives U.S. drivers take each year, according to the Centers for Disease Control and Prevention.

We have a crisis of confidence on our roads. Bikers are scared of drivers because most are distracted, selfish, or both. And drivers hate cyclists because they are unfamiliar or spectacularly reckless.

“Once you’ve biked in a city you quickly realize one rule trumps all road rules: self preservation,” writes Somerville’s Bekka Wright, the creative talent behind the illustrated Bikeyface blog. “Yes, there will always be [cyclists] to do what they can get away with. But perhaps some are just doing what they feel they need to get away with to get to work or school or back home safely.”

As Wright puts it, riding through certain parts of the city is a moment-to-moment struggle to “GET AWAY FROM THE BIG METAL THINGS” (emphasis hers).

Which brings us back to Kenmore Square.

I regularly run the lights just west of Mass Ave so I can cross two lanes to the bike lane, which jumps to the other side of the road. I need the head start, because as one Boston cyclist showed in a recorded encounter last year, drivers hate the sight of you and will use their vehicles to block you out.

Another example of safety-related rule-breaking is riding on the sidewalk adjacent to hellish roads, like Charles Street near Boston Common. Ride on the road in these spots, and you risk breathing your last.

Following the rules is often unsafe. Other times, it’s impossible. After being ticketed for straying from a New York City bike lane, filmmaker Casey Neistat filmed himself crashing his bike into vehicles and other hazards obstructing bike lanes in New York.

If drivers don’t like sharing the whole road with bikes, then they should start respecting bike lanes (a quick look at Kenmore Square shows that drivers do not). As the Cops in Bike Lanes blog demonstrates, even law enforcement has unclean hands.

Drivers will have to learn to share the road even when they don’t want to. The law is clear: bikes have the privileges of any other vehicle. So cyclists can use a full lane, ride beside another cyclist, and pass to right of traffic.

Not being the only people in the world, drivers will have to accommodate bikes, even when it slows them down. Advises a video produced by the Massachusetts Bicycle Coalition in partnership with the Boston Police Academy: “Bicyclists should not endanger themselves to allow impatient motorists to pass.”

And with bike popularity rising dramatically year after year, there’s no need to justify cyclists’ right to the road. Naysayers can adapt or be left behind.

In the end, urban drivers and urban cyclists should join forces. Our cities have a slew of problems, and if drivers and cyclists band together, they can help create a network of streets that accommodates safety for bikers and efficiency for drivers, because the status quo is not working. The utopia remains the Dutch system, where bike and car traffic is completely separated.

In the meantime, drivers can expect cyclists to ride in the best interest of their safety, even if that means breaking the rules.

Enter to win a pair of tickets to attend The Hess Collection Seminar and Dinner as part of Boston Wine Festival 2018 at the Boston Harbor Hotel on Wednesday, March 14th. END_OF_DOCUMENT_TOKEN_TO_BE_REPLACED

END_OF_DOCUMENT_TOKEN_TO_BE_REPLACED

Picture this: you’re hungover. Or just getting over the flu. Or jet-lagged. Or just plain run down and exhausted. Now, picture this: a certified nurse comes to your home and helps you through it. That’s the concept behind The I.V. Doc–now available in Boston. Dr. Joseph A. Russo and his team joined me in studio with all the details. END_OF_DOCUMENT_TOKEN_TO_BE_REPLACED

Chef David Vargas, Owner of Vida Cantina in Portsmouth, NH is hosting a one-time-only event that he created to raise money for foundations supporting immigrant workers and their families. He joined me in studio with Chef Daniel Bojorquez of La Brasa in Somerville to talk about Si Se Puede – Yes We Can Dinner on Sunday, April 2. END_OF_DOCUMENT_TOKEN_TO_BE_REPLACED

Ryan Brister, area director of Life Time Fitness was in studio with me this morning to talk about what Life Time is all about and to preview their new Chestnut Hill location, coming in Spring 2017. END_OF_DOCUMENT_TOKEN_TO_BE_REPLACED

Oliver Taylor of Vitamin 1 Performance Drink joined me in studio to talk about how they’re filling the void of a healthy and nutritious sports drink, which tastes good. What a concept, right? Listen! END_OF_DOCUMENT_TOKEN_TO_BE_REPLACED

Boston band Funeral Advantage is Tyler Kershaw. And Tyler Kershaw had a fun childhood, so it seems. END_OF_DOCUMENT_TOKEN_TO_BE_REPLACED

Perry put me on to daephne and the album blew my mind. END_OF_DOCUMENT_TOKEN_TO_BE_REPLACED