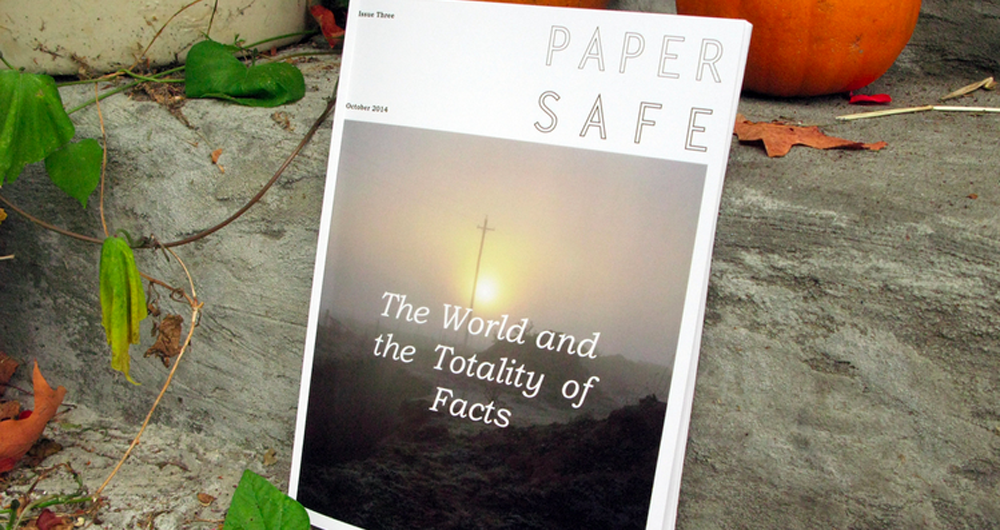 Having broken out in the past year as a new aggregated platform for the latest developments and up-and-comers in contemporary analog photography, Papersafe, backed by the darkroom and film processing aficionados at CatlLABS of JP, has become a fresh perspective in constructing today’s outlook on contemporary photography. Today, they’re proud to present the third in-print installment of the independent publication that encompasses the nature of Papersafe’s underlying mission to be part of a global conversation regarding photography.

Trevor Powers, one part of the brain behind Papersafe and the journal’s editor (this issue also enlisted the help of previous contributor, Carl Gunhouse), envisioned it as a space in which to “create a current, critical and thought provoking showcase of analog photography from around the world.” And in asking analog photographers of all sorts to evaluate and contribute their own work through the Papersafe lens, some striking newness emerged.

“With this third issue it was important that we make it apparent that we’re not living in this little bubble of publishing in the U.S.,” says Powers. “I feel like we are based here, our audience is here, and there is so much focus on contemporary photography and up-and-coming photographers from the US, that we wanted to look elsewhere for this issue.”

This third issue is a delightful photosynthesis of work from photographers hailing strictly from outside the United States—whose subject matter runs the gamut of contemporary photography—to make for what certainly amounts to a unique and exciting publication. Its pages are positively bursting with stunning imagery, impossible colors and thoughtful writing and interviews conducted by the duo behind Don/Dean, a well-known photo blog who’s thought-provoking  bi-weekly interviews have become a fixture to the online photography community.

“With each issue of Papersafe we wanted to involve at least one other aspect of the community, whether it’s bringing on co-editors or involving others like Don/Dean,” says Powers. “It allows us to combine audiences with other people that are doing similar stuff so we’re not so insular. Part of our overall mission is to be part of something bigger and to collaborate and share ideas.”

Papersafe is printed in limited edition formats, with each issue’s edition size being less than 100. “One of my goals in creating a zine or journal like this was to make sure that each issue sells out,” says Powers. “So we’re not overproducing and we don’t end up with tons of random copies lying around for a long period of time. Our reasoning for making the editions small is not for the collectors aspect, it’s more about being humble and being understanding of the market and not wanting to flood it.”

Join the Papersafe team in Boston tonight for a release event  from 6-9pm at Aviary Gallery and grab a copy in person!

Enter to win a pair of tickets to attend The Hess Collection Seminar and Dinner as part of Boston Wine Festival 2018 at the Boston Harbor Hotel on Wednesday, March 14th. END_OF_DOCUMENT_TOKEN_TO_BE_REPLACED

Artists for Humanity Co-founder Jason Talbot and Major Gifts Director Emily Smaldon were in studio this morning with Mallory Bazinet, Event Manager for GrandTen Distilling. Jason and Mallory talked about The Contemporaries, their upcoming event to launch a new patron group for young professionals. Click here to join them on Thursday, August 17! END_OF_DOCUMENT_TOKEN_TO_BE_REPLACED

Aida Villarreal-Licona is the Events Coordinator for SoWa Boston’s Art & Design District. She was in today to talk about their holiday shopping event this Thursday December 15 from 4-8 p.m. at 450 Harrison Avenue. A great opportunity to help local artists and get some holiday shopping done! END_OF_DOCUMENT_TOKEN_TO_BE_REPLACED

Natalie Lemle was in to talk about ArtLifting, a program that aids homeless and disabled artists. Currently, 72 artists in 11 states are receiving 55% of all profits from your purchase of their artwork and photography. Click “more” to hear my chat with Natalie and to see work from one of the artists. END_OF_DOCUMENT_TOKEN_TO_BE_REPLACED

Boston band Funeral Advantage is Tyler Kershaw. And Tyler Kershaw had a fun childhood, so it seems. END_OF_DOCUMENT_TOKEN_TO_BE_REPLACED

Perry put me on to daephne and the album blew my mind. END_OF_DOCUMENT_TOKEN_TO_BE_REPLACED

It’s no secret that Bostonians like to show their Patriot pride with tattoos. Who can forget the awesome guy who got that sweet Bill Belichick arm tattoo? Or the less-awesome guy who showed off his full-head Tom Brady helmet tattoo in his mugshot? END_OF_DOCUMENT_TOKEN_TO_BE_REPLACED