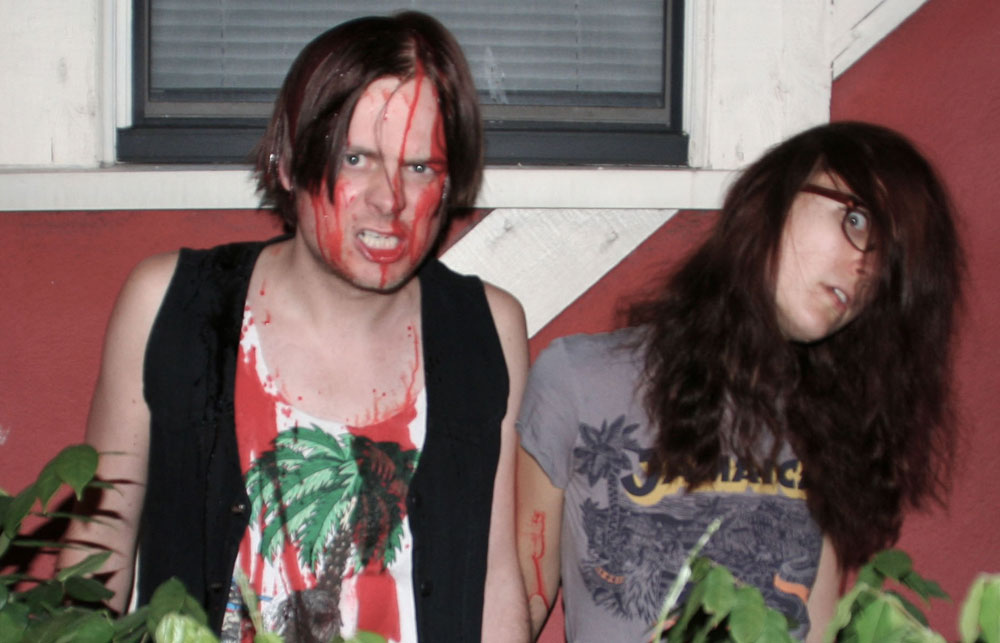 While The Misfits might seem an odd pairing for a synth-pop act, the music of Boston’s Ruby Ridge has a decidedly dark, post-punk edge to it — as heard on its recent “Intent EP” — so it’s not as big a stretch as it might seem. We asked one half of the duo, John Bittrich, about the band’s clattering, claustrophobic cover of “Come Back,” just released as an early Halloween treat, and the tradition of Halloween cover shows in Boston (see our full picks here).

Q. Why’d you pick this song to cove and what did you do to put your own spin on it?

A. We picked “Come Back” for several reasons. For starters, it’s a very creepy song. It’s slower and longer than a lot of other Misfits tracks and it’s not like “Where Eagles Dare” or “Attitude” or “Skulls,” one of the obvious choices that a million bands have already tried to put their stamp on. We also thought that by taking one of the more rockabilly-influenced Misfits songs in a more synth-y direction, we might be able to pull off something kind of Suicide-esque, blending those two worlds together.

Q. The Misfits don’t seem like a natural choice for an electronic leaning band, right? Or are they an influence that might not seem obvious?

A. I can’t speak for Cal, but the Misfits are actually a huge influence for me. A lot of what I try to bring to the table in our group comes from really dark, guitar-driven stuff like The Misfits and also Killing Joke, Joy Division, Swans, ’80s anarcho-peace-punk stuff, the Birthday Party … That stuff definitely rubs off on what we do [especially in the vocal delivery] and it helps keep us from sounding like another cookie-cutter synth-pop band. Especially if you combine it with our other secret musical passion, which is new-age music. Plus, the chance to do something unexpected and maybe kind of difficult to translate was half the fun.

Q. You’ve done Halloween cover shows in the past. Why didn’t you want to this year?

A. In the past two years, Ruby Ridge has played Halloween shows as both The Knife and The Cure. This year, we did not have the time or inclination to learn an entire set of someone else’s material just to play it once. Thing is, though, we really really love Halloween. And we love doing goofy covers. So we decided to cover a song by the most Halloween-y band of them all and put it up online for people to have forever instead of just playing it out live once. It’s a lot of work to learn a whole set just to play it once, unless you half-ass it, and that’s why I’m always wary about hitting up this type of event if I’m not playing. I’ve seen some bands hit it out of the park — The Daily Pravda as Ziggy Stardust at The Pill a few years ago, Protokoll as Bauhaus back in the day. But mostly it seems like kids just pick four or five songs that are easy to play and then joke their way through an uninspired performance of them, which really only amounts to about half an actual set. We’re not willing to do that. So we decided it would be easier to just do one song right.

Perry Eaton writes for Boston.com. Perry Eaton talks on the radio with me from time to time. Today, he talked to me about what he’s been listening to and some upcoming shows and festivals worth checking out. Click here to read more. END_OF_DOCUMENT_TOKEN_TO_BE_REPLACED

In some ways, Palehound has always had a home in Boston. END_OF_DOCUMENT_TOKEN_TO_BE_REPLACED

Kal Marks is the kind of band that sneaks up on you. Whether you’re experiencing them at some basement show in Allston, or in an opening set for Pile at Great Scott, you may not see them coming, but they’ll immediately click. The combination of heavy sludgy riffs and lead singer Carl Shane’s unique crooning bowls you over. It’s dark and it’s compelling, but most importantly, it’s really earnest. END_OF_DOCUMENT_TOKEN_TO_BE_REPLACED

It’s not very often that some of the most talented performers in Boston are set to grace the same stage in a single night. This Sunday marks the 1 year anniversary of Mind Spray, a local hip-hop open mic and showcase series devised by promotion and booking company The Brain Trust. END_OF_DOCUMENT_TOKEN_TO_BE_REPLACED

There’s been a lot written about Street Dogs evicting a group of neo-Nazis from the pit at their House of Blues, Anaheim show on St. Patrick’s Day. You don’t need to read any of it. Just listen to front man Mike McColgan tell the story. He talks about joining his old band, Dropkick Murphys, on stage in Boston last week, too. END_OF_DOCUMENT_TOKEN_TO_BE_REPLACED

It’s not her best. END_OF_DOCUMENT_TOKEN_TO_BE_REPLACED

When in Nashville, do as the locals do. Since relocating to Tennessee a few months ago, this seems to have been Steven Tyler of Aerosmith’s approach after announcing in an October Twitter Q&A session that he intended to record a country album, an endeavor he’s well in the process of completing. END_OF_DOCUMENT_TOKEN_TO_BE_REPLACED

“I’m Shipping Up To Boston” just turned ten years old. Boston.com’s Matt Juul put this piece together on the history and significance of the Dropkick Murphys song, then joined me in studio to talk about it. END_OF_DOCUMENT_TOKEN_TO_BE_REPLACED

Boston is a city known for it’s Irish heritage, and it’s celebration of it. Two main traditions have held strong in Boston: the St. Patrick’s Day Breakfast and subsequent Parade. But I argue there is a third now: seeing the Dropkick Murphys at the House of Blues during their multi-night March Residency. END_OF_DOCUMENT_TOKEN_TO_BE_REPLACED

Sure, you might see a punk show on Monday and a chillwave band on Thursday and so on, but usually you favor one sound over another because you’re a busy bee and time is honey. It’s been the same for years, and the Prefab Messiahs can vouch. END_OF_DOCUMENT_TOKEN_TO_BE_REPLACED