For roundtable number two, we’ve got a mixed bag of creatives and account folks to weigh in on the workplace relationships that got a little close to comfort this episode. Though, tbh, it’s not like that wasn’t a problem for incestual environment of “Mad Men” before now.

This week we met Samantha “Pima” Ryan, an artist working with the agency who attempts to seduce both Peggy and Stan. What did you think of their relationships? And then how they handled the Cinzano account?

EB: Pima seems a little too comfortable wielding her sexuality to build power, but now with women like Peggy in power positions, Pima is, just as Peggy calls her, a hustler.

JP: I think Pima would be challenged in today’s agency. With the popularity of open workspaces and the lack of darkrooms, it would prove difficult for her. At the end of the day, the work got done. The client wasn’t privy to any of the drama, the shoot went off as planned and Peggy made her selects as a senior creative at Sterling Cooper & Partners. The net result is a win.

CD: I just want to say that Pima is another example of amazing casting on this show. In a season that already snuck in Alex Mack and Brian Krakow, we now see Mrs. Kensington, international woman of mystery. Mimi Rogers is a treasure, but Pima is not.

What’s the best way to get out of an awkward talent-agency relationship? What should Stan do? Peggy’s response: Spiteful or smart?

EB: What should Stan do? Everything. You know, because he’s an art director.

MM: I think if Stan continues to kill it with non-traditional neckwear, like last week’s scarf and this week’s bolo tie, he can handle anything that comes his way.

JP: No doubt, Michael. I feel like us agency people often under utilize the power of neckwear to solve problems. I, myself, will be sporting an ascot starting tomorrow. On the other hand, Peggy’s response was all business. Amazing to see how much her character has changed from the days of her dalliances with Pete.

EB: #teampeggy all the way. Peggy’s work life is all about maintaining control, and anyone who makes her feel something (Ginsberg, Mathis’ brother last week, and now Pima) threatens that. You can’t say she wasn’t affected by Pima’s advance, even if she did see through it. Keeping things “all business” is a matter of survival for Peggy at this point. She’s got too much to lose. 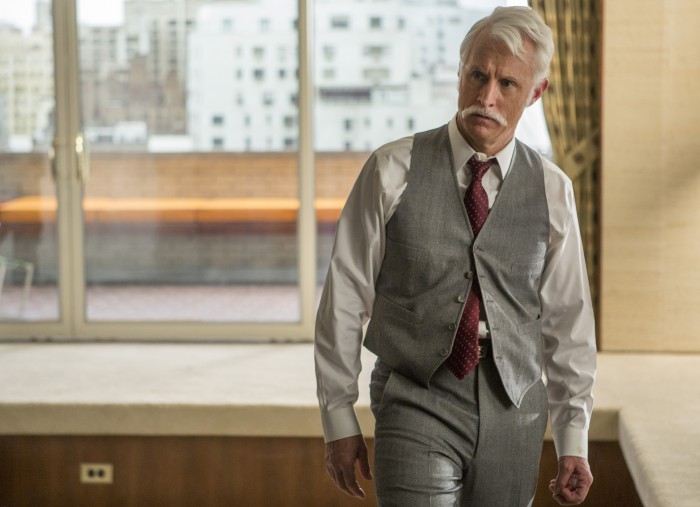 What did we think of Roger’s code for clients — “NAC,” which stands for “No Afternoon Calls,” implying the client is drunk after noon? And what about Roger in general? Is he stepping up this half-season?

MR: Id like to start employing NAC around the office at Sapient — to get work done, of course. Roger’s biggest issue this half-season is his facial hair.

JP: It’s a little concerning that both Marie and Erica are pretending that we don’t have acronyms for clients.

EB: Yes, like at Forge we use BCE. Best. Client. Ever. But seriously, your goal is to set the stage for the most productive meeting possible. We all work around client peccadilloes to do that. I’m just impressed that they can keep track of who is and who is not a drunk around there.

MM: How many times do you think Roger has been on someone else’s NAC list? Roger seems to be taking Cooper’s leadership speech from last season to heart. He’s trying but you can tell the pressure is weighing on him. As they say, heavy lies the mustache. Even with two secretaries and three telephones Life Cereal is confused with Secor Laxatives. Let’s hope that’s the only time that happens in his day.

Don and Pete lament over client dinners without wives. What’s the current solution? Do you need a date? Can you bring a friend?

MR: I don’t bring my husband to client dinners.

EB: I feel like these days you bring your work husband, not your real husband.

The big storyline this week was Megan and Don. How do we feel about the way they handled the divorce? Is that the end of Megan?

MR: Don Draper may be a great lover, but he’s a horrible husband. Make him pay. He put Megan through so much shit. I’m happy to see him fork it over.

EB: I agree, Marie, but I struggle with how quickly Megan went from, “You don’t owe me anything” to taking everything. Though I was cheering when she called Don, “an aging, sloppy, selfish liar.” That must have stung — I mean, this a guy that is so admittedly vain that a few hours earlier he climbed out of bed and put on a suit for a 3 a.m. booty call.

JP: If by “handle the divorce” you mean let your mother take everything in your Architectural Digest-inspired apartment while you accept a $1 million check from Don, then I’d say it was handled swimmingly. The old saying “conscience is a mother-in-law whose visit never ends” really hits home when Marie justifies her actions by saying she was taking “everything that is owed.” But I can’t help but feel a little joy that Megan caught her mother with Roger. People in glass houses and all. I don’t think it’s the end of Megan. She’ll probably run away with Harry Crane, join Paul Kinsey and start their own cult. You heard it here first.

CD: Even if we don’t see Megan again, I don’t think Don is rid of her. If this episode proved anything, it’s that the women of his past are never really out of his life.

MM: Say what you will about Don, he’s never afraid to repent for emotional betrayal with material goods. Even with that giant check, I feel for Megan here. She was too wide-eyed to know what was happening when she married Don. He keeps making the same mistakes.  I’m just glad the episode didn’t end with a desperate proposal to Diana.

And, of course, BETTY! Going to school for psychology! Any thoughts on what her thesis might be?

MM: As a Fairfield University alumnus, I’ve never been more disappointed in my alma mater for considering admitting Betty. I’m going to write a letter to the fictional Dean in 1970.

CD: No way should you be disappointed, Michael. I think Betty is a prime candidate for a psychology major. She’s always kind of been fascinated by the study, and she can start the 50s housewife PTSD support group.

MM:I suppose you’re right she is perfect for it. And we always knew Sally was going need therapy after this upbringing. Maybe Betty could be her therapist and they can sort out the mother issues two-birds-one-stone style.

JP: I don’t see her getting that far. I feel that this would be yet another dream that Betty ultimately abandons for a man. She did it with her modeling career for Don. I see her doing it again the minute Henry gets an opportunity to move up the political ladder. Sally will have to find the help she will need elsewhere.

This transcript has been edited and condensed. If you’re an ad pro and want to participate in next week’s Mad Men roundtable, shoot me a note: [email protected].

Always a pleasure to have Boston.com’s Perry Eaton in studio for a chat. After we talked a bit about Pearl Jam at Fenway and Perry’s new podcast, he filled us in on Game of Thrones live and Narragansett’s new Bananagrams-themed brew. END_OF_DOCUMENT_TOKEN_TO_BE_REPLACED

No, not from afar, from the comfort of her couch. From the actual awards themselves. That’s where Meredith Goldstein was for the Oscars. She shared all the juicy, first-hand details with me. END_OF_DOCUMENT_TOKEN_TO_BE_REPLACED

It was wonderful having our good friend Meredith Goldstein back in studio this morning. She dug into the latest edition of Love Letters, which prompted us to play this song. And of course we had to discuss the Oscars. Make sure you’re following Meredith on Twitter, as she’ll be live-tweeting the awards this Sunday night. END_OF_DOCUMENT_TOKEN_TO_BE_REPLACED

Our first edition of TV Sets for 2016 might be better than every edition from 2015. END_OF_DOCUMENT_TOKEN_TO_BE_REPLACED