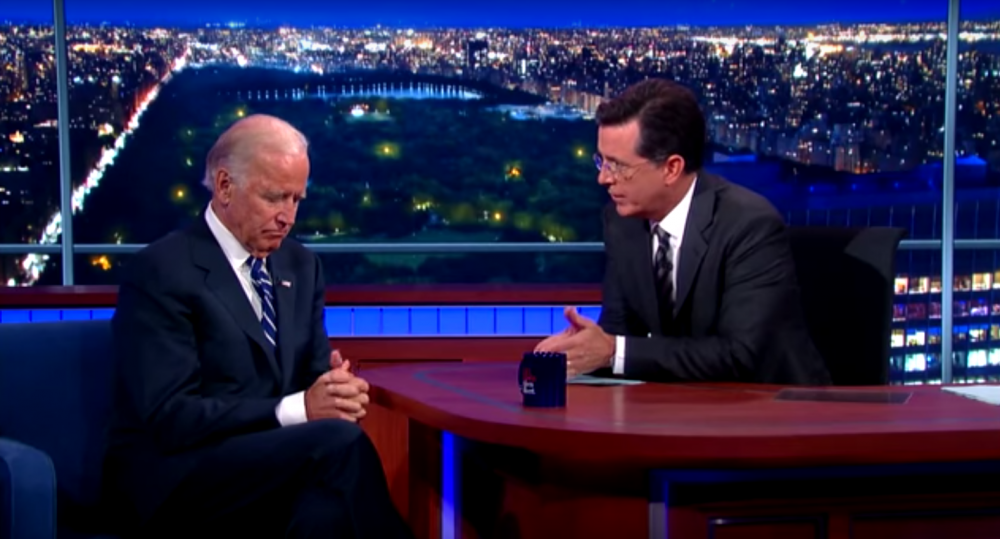 Vice President Joe Biden has held his current position for nearly two terms. But the world might have seen the most candid side of him yet during his appearance on The Late Show with Stephen Colbert Thursday night.

On the third episode of late night’s newest show, Biden sat down in the storied Ed Sullivan Theater to rousing applause. And the host seemed just as excited to see him as the audience. Colbert greeted Biden by commending him for being so well-liked and for being so himself:

“You’re not a politician who’s created some sort of facade to get something out of this or triangulate your political position or emotional state to try to make us feel a certain way,” Colbert told him. “We see the real you.”

The congratulatory tone of the interview soon shifted when Colbert began talking about the recent loss of Biden’s son, Beau.

“People know that you have experienced tragedies in your life,” Colbert said. “And we are inspired by the way that you have responded to those. And for myself, and I suspect for millions of people out there, I’d like to offer my condolences for the loss of your son, Beau. I know that he was a great man, and I was hoping you could tell us a story about him.”

Biden had a lot more than one story to tell.

With the help of old family expressions and his signature toothy grin, Biden delivered a moving, deeply honest tribute to his son’s life.

The love Biden had–and continues to have–for his son was evident.

Beau Biden died of brain cancer in May of this year. Beau, a former attorney general of Delaware and a Bronze Star recipient after his 2008 deployment to Iraq, was only 46 at the time of his death.

Rumors are swirling around Biden’s possible bid for the presidency, and his appearance on The Late Show may seem like a calculated ploy to tug at the heartstrings of American voters. But Biden told Colbert that he doesn’t think he’s in the proper state of mind to campaign.

“I don’t think any man or woman should run for president unless, number one, they know exactly why they would want to be president,” Biden said. “And, two, they can look at the folks out there and say, ‘I promise you, you have my whole heart, my whole soul, my energy, and my passion to do this.’ And I’d be lying if I said that I knew I was there.”