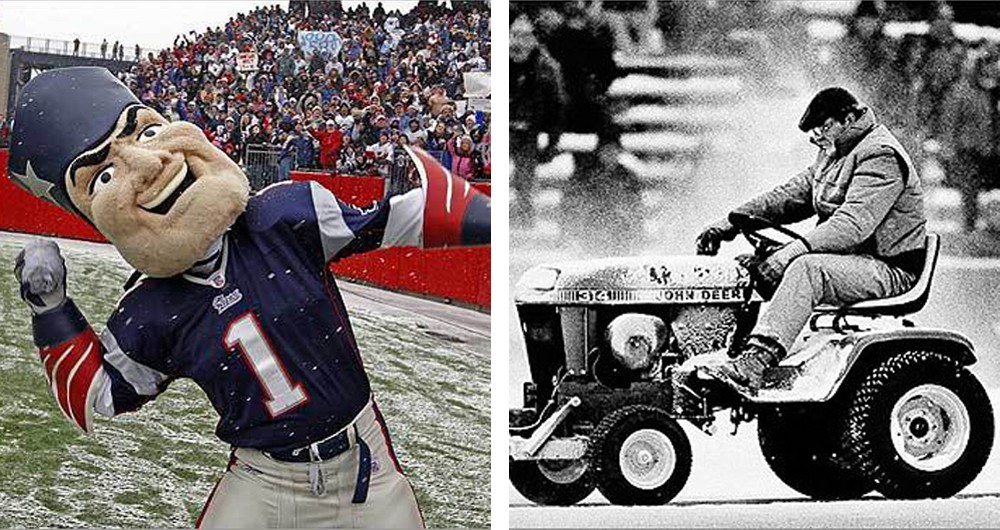 In the arena of stats and measurables, the New England Patriots are one of the best teams in the post-merger NFL. However, they’re superlative in the realm of gossip and scandal.

Deflategate (or Ballghazi, as actual funny people are calling it) is merely a modicum of the many tabloid-ready escapades the Pats have been involved in. Though Deflategate certainly isn’t alone in being blown out of proportion, in the grand scheme of Belichick et al.’s misgivings, how does it compare?

Here are ten examples of their underhandedness. 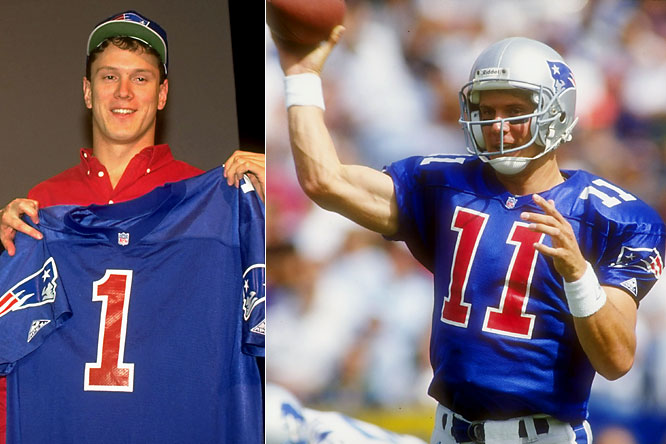 November 15, 1997
The Patriots’ current franchise QB isn’t the only top-tier gunslinger in New England’s history to attract controversy. Brady’s predecessor Drew Bledsoe also ran afoul of the general public after he, his backup Scott Zolak, and OL Max Lane bodyslammed a female Everclear fan at a show at the Paradise. Of course, this was before the 24-hour news cycle, so things were quickly forgotten, but the victim did suffer neck, shoulder, and arm injuries. Bledsoe’s agent gave this Belichick-ian statement in reply:

“Drew went to a concert and, following the custom of his generation, he jumped into the crowd…I’d prefer he not jump off stages.” 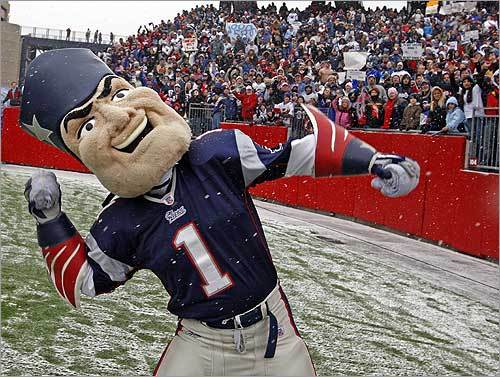 December 11, 2009
Robert Sormanti, one of the many faces behind the mask of Pat Patriot, was arrested in 2010 as part of a prostitution sting in Rhode Island. The Warwick native was one of 14 cuffed for the newly reformed ordinance that outlawed indoor prostitution (Rhode Island is a strange place) after answering a Craigslist ad. The Pats organization suspended Sormanti in the wake of his arrest, and that’s where the trail goes cold. We can only assume Sormanti was eventually let go, and the whole thing was swept under the rug without too much fanfare.

November 6, 2008
Caitlin Davis saw her dreams of joining the Patriots cheerleaders dashed when she was fired from the squad after pictures of her posing with a marker over a passed out man decorated with swastikas surfaced on Onblastatlast.com. Bob Kraft, who is famously a member of the Anti-Defamation League, was having none of it, and Davis was kicked to the curb within a week of the photos leaking. Because of the immediate action, this scandal blew over pretty quickly, and there was little blowback for the players and coaches. 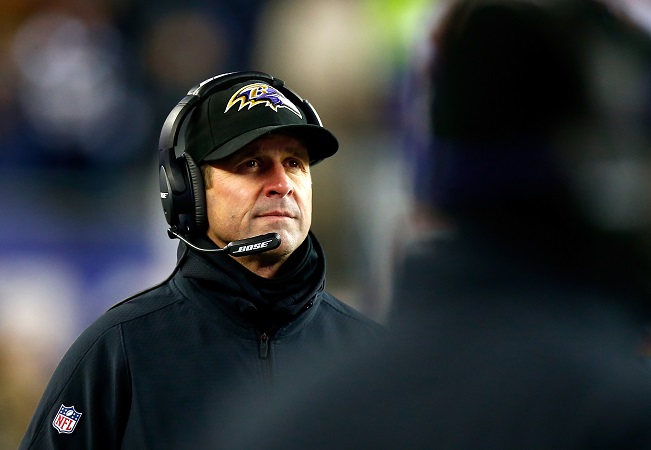 January 11, 2015
Though Patriots fans would maintain the team’s innocence in the face of any and all accusations, this is one example wherein the hometown boys were following the rulebook. But this didn’t stop red-eyed crybaby John Harbaugh from taking to the media to complain about the Patriots’ sneaky offensive substitutions. Harbaugh, who took a penalty after running on the field to protest Belichick’s “deceptive” practice of naming RB Shane Vereen and TE Michael Hoomanawanui ineligible receivers while in a hurryup offense, didn’t have a leg to stand on, as the league eventually ruled the move legal. Belichick would employ the same trickery in the ensuing AFC Championship game against the Indianapolis Colts, which only reinforced his image as a master of deception.

February 19, 2007
Before Brady married Gisele and became the domesticated family man we know him as today, he made TMZ headlines when he left pregnant former girlfriend Bridget Moynahan. The Patriots signal caller has since reformed his playboy image. 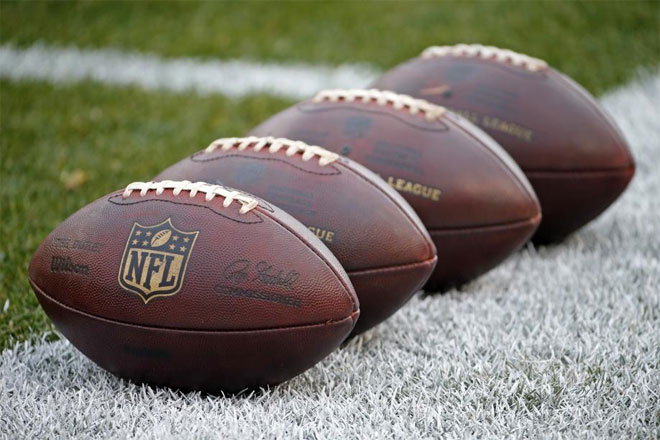 January 19, 2014
Just about everything that needs to be written about Ballghazi has been written already — the Patriots stand accused of underinflating 11 of the 12 home game balls in their AFC Championship victory over Indianapolis. The missing PSIs have driven the hawking sports media bananas, despite the fact that ball tampering isn’t exactly a rarity in today’s NFL. At any rate, it seems like the Pats have been caught red-handed, and they’ll face fines and (potentially) draft pick forfeitures, but the lasting effect will be the asterisk talk. In the grand scheme, it’s not the worst thing the New England team has ever done, but it certainly isn’t as innocuous as getting too amped at a dadrock show.

4. Pats Snowplow Their Way to Victory Against Dolphins

December 12, 1982
The Patriots’ legacy of using unwritten rules to their advantage actually began 33 years ago, when then-coach Ron Meyer ordered a field hand to snowplow a patch of the field so that NE kicker John Smith could kick a field goal over the Dolphins. The 33-yarder won the game 3-0 for the Patriots, and, following the game, the use of snow plows was promptly disallowed. Miami coach Don Shula was understandably livid, throwing one of the most epic tantrums in NFL history, but the league did not take any other action. The tractor used to clear the field is now proudly on display at Patriot Place.

3. Aaron Hernandez Arrested for the Murder of Odin Lloyd

June 26, 2013
Perhaps the biggest media circus to ever hit the New England sports world was the descent of TE Aaron Hernandez. After the former Florida Gator reportedly picked up Lloyd at 2:30 a.m. –following a dispute the two had at a nightclub earlier in the night– Hernandez’s own security cameras show the tight end leaving his home with a gun, and gunshots were reported in the Attleboro neighborhood that night. Lloyd was found dead in a nearby industrial park. The Pats were quick to wash their hands of Hernandez, cutting him shortly after his arrest, which is the only reason why this scandal isn’t higher on this list.

January 19, 2002
ESPN named the Patriots’ controversial victory over the Oakland Raiders in the 2002 playoffs the 48th most memorable moment of the past 25 years, which almost trivializes how much it’s affected the offending team. Between the tinhats saying they should have their 2003 Super Bowl rings revoked to Ray Lewis saying it’s the only thing Tom Brady is remembered for, the perpetual AFC East winners are constantly reminded of the ref’s decision to rule Charles Woodson’s strip sack an incomplete pass. Admittedly, it was the wrong call to make, but you won’t hear Pats fans complain, even if it meant their hometown franchise became more hated to the outside world. 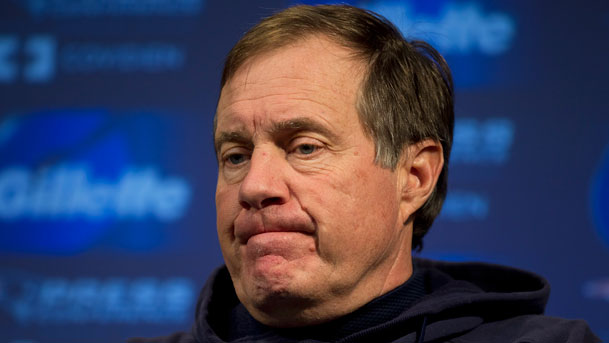 September 9, 2007
When Bill Belichick turned his cameras to the sidelines to videotape the New York Jets, he committed what many consider to be football treason. Though Belichick insisted that the practice was common elsewhere in the NFL and admitted his team had been taping signals from opponents since 2000, the Patriots became the league example for cheating. They were hamstrung for $250,000 and their 2008 first-round pick (Belichick was also fined $500,000, the largest fine ever levied by the league at the time). The scandal will stand as a black mark on the coach’s career as well as the Patriots’ organization, who won all three of their Superbowls while “spying” on opponents. It also set a standard for how low Belichick is willing to sink for wins, an ambition he is still lauded for here in Boston.

Enter to win a pair of tickets to attend The Hess Collection Seminar and Dinner as part of Boston Wine Festival 2018 at the Boston Harbor Hotel on Wednesday, March 14th. END_OF_DOCUMENT_TOKEN_TO_BE_REPLACED

The Black and Gold continue their run tonight at TD Garden. END_OF_DOCUMENT_TOKEN_TO_BE_REPLACED

Who will make the Class of 2018? END_OF_DOCUMENT_TOKEN_TO_BE_REPLACED

It’s been awhile since we talked Black and Gold. END_OF_DOCUMENT_TOKEN_TO_BE_REPLACED

You’re going to wish you were in the Northern Alps. END_OF_DOCUMENT_TOKEN_TO_BE_REPLACED