The Three Best Moments From the ‘Better Call Saul’ Premiere

Though much of the nation was focused on last night’s Grammys, AMC had a blockbuster night of its own.

First came the explosive, gore-filled midseason premiere of The Walking Dead, which left more than a few fans upset. Then came the premiere of Better Call Saul, the Breaking Bad spinoff starring Bob Odenkirk that always seemed more like fan fantasy — like a Lost starring Ben and Locke.

From the artistic black and white opening to the dramatic cliffhanger ending, a lot happened in last night’s episode. Here’s a recap of some of the best moments, including visits from two old Breaking Bad friends. 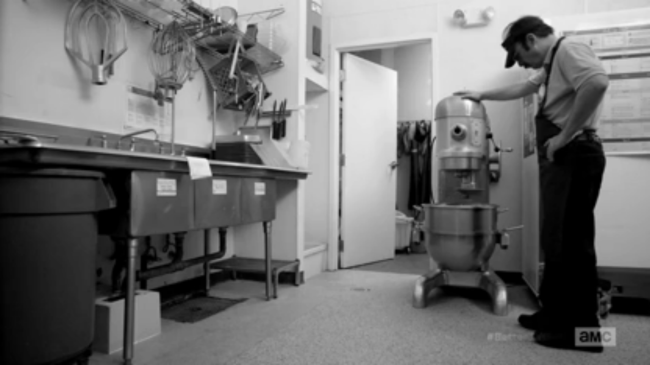 The majority of last night’s episode took place in Saul’s past, back when he wasn’t Saul Goodman but rather Jimmy McGill, a sad-sack lawyer struggling to get by between public defender gigs with a dilapidated office in the back of a Chinese nail salon. But Breaking Bad viewers may remember the penultimate episode of the show, when Saul says his best-case scenario for witness protection is managing a Cinnabon in Omaha. From the looks of it, that’s exactly what he’s doing.

The five-minute black and white intro shows us how far Saul has fallen, as he drinks alone on his couch watching old tapes of his television commercials. 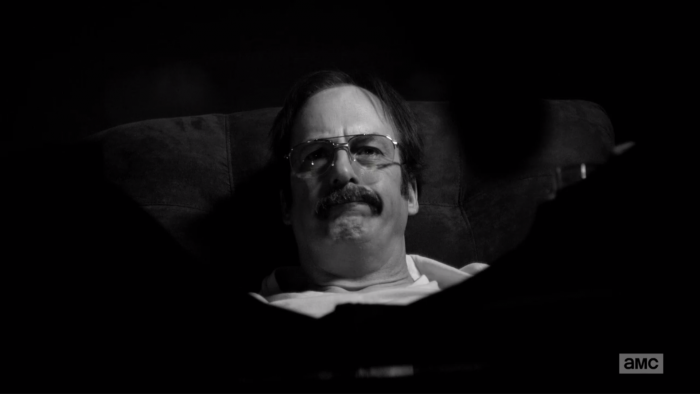 In a fun real-world side note, Cinnabon launched a giveaway coinciding with the BCS premiere, offering customers free mini-bons in boxes with Saul’s sad face on it. So if you manage to get out of your house despite all this snow, Cinnabon has a free sweet treat waiting for you.

It had already been confirmed that Jonathan Banks would be reprising his Breaking Bad role as Mike Ehrmantraut, but it was still thrilling to see him and Saul share a brief, yet hilarious interaction.

When Saul leaves yet another terrible public defense gig, he tries to validate his sticker so he can leave the parking lot. 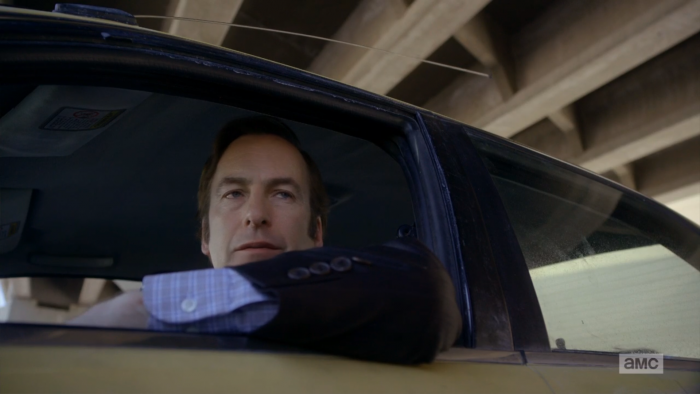 And who plays the surly parking attendant telling him he doesn’t have enough validation stickers and needs to pay the full three dollars? Why it’s Mike! 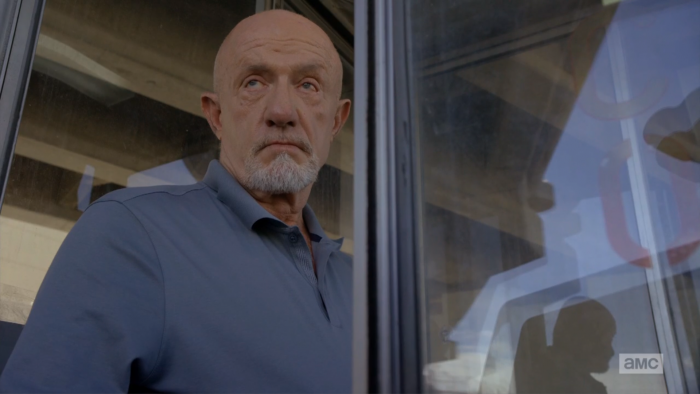 While his role as a parking attendant doesn’t seem to suggest Mike will be a prominent (or regularly appearing) character, his presence was very much appreciated.

3. Saul finds himself in trouble with an old friend.

One of the episode’s major plot points focuses on Saul’s attempts to land a wealthy city treasurer facing potential embezzlement charges as a client. In a last-ditch attempt, he enlists two skateboarding burnouts for a personal injury scheme, paying them to jump in front of the treasurer’s wife’s car so Saul can show up and play Hero Lawyer when the skaters demand the woman pay them off in lieu of a lawsuit. Unfortunately things go wrong in a big way.

The skaters tail the woman home, who turns out not to be the treasurer’s wife, but rather an elderly Latino woman who doesn’t speak English. When the skaters demand ‘dinero,’ she mumbles something about her hijo, and leads them inside. That hijo? It’s Tuco Salamanca, the big baddie from season one of Breaking Bad!

We know Tuco’s fate is sealed, but in pre-Walter White days, he could cause a lot of problems for Saul Goodman. The episode ends in a cliffhanger, but don’t fret: part two of the season premiere airs tonight at 10/9c on AMC.

And for those who missed last night’s episode, Amazon is letting you watch the premiere for free. So email your bosses and call off this “work from home” day a little early and catch up.

Always a pleasure to have Boston.com’s Perry Eaton in studio for a chat. After we talked a bit about Pearl Jam at Fenway and Perry’s new podcast, he filled us in on Game of Thrones live and Narragansett’s new Bananagrams-themed brew. END_OF_DOCUMENT_TOKEN_TO_BE_REPLACED

No, not from afar, from the comfort of her couch. From the actual awards themselves. That’s where Meredith Goldstein was for the Oscars. She shared all the juicy, first-hand details with me. END_OF_DOCUMENT_TOKEN_TO_BE_REPLACED

It was wonderful having our good friend Meredith Goldstein back in studio this morning. She dug into the latest edition of Love Letters, which prompted us to play this song. And of course we had to discuss the Oscars. Make sure you’re following Meredith on Twitter, as she’ll be live-tweeting the awards this Sunday night. END_OF_DOCUMENT_TOKEN_TO_BE_REPLACED

Our first edition of TV Sets for 2016 might be better than every edition from 2015. END_OF_DOCUMENT_TOKEN_TO_BE_REPLACED