Best. Maid of honor speech. Ever. 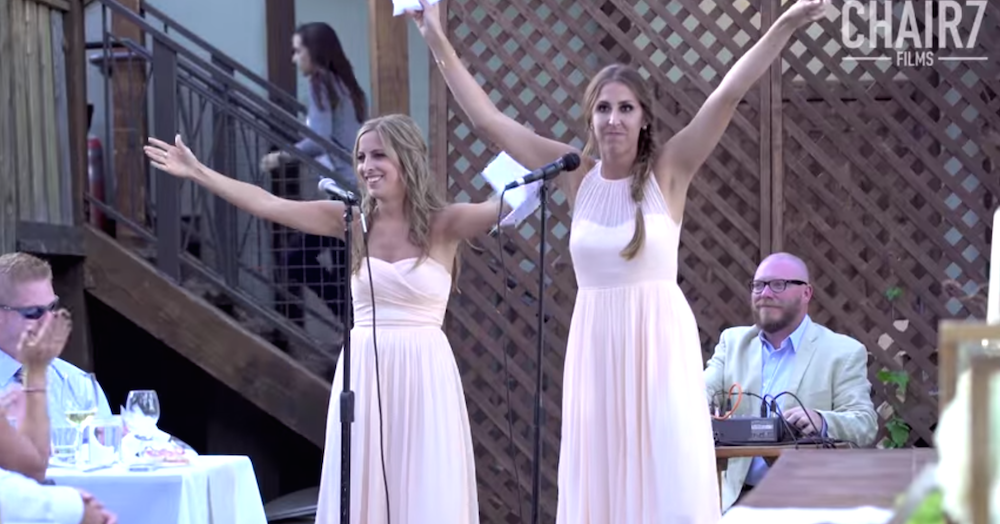 “Enough of the sappy talk,” begins Maddie Hallerman in her and sister Kelsey Hallerman’s maid of honor speech for their sister Caitlin Hallerman’s wedding to John Weaver.

“Cait, we’ve been living in your shadow,” says Kelsey, “but it’s time for us to step into the spotlight.”

And then, as both the music and the crowd’s laughter bubble, oh, they do.

Maddie and Caitlin set the scene and break it down with Tracy Chapman’s “Give Me One Reason” (“Cait, you’re the reason we’re all here”) and Jackson 5’s “I Want You Back” (“When you were a little kid, you didn’t want boys around”).

They then transition to Backstreet Boys’s “Everybody” to tell the story of Caitlin’s first date with Weaver (“If he’s everything you need, you better lock that boy down now”).

Just take a look at those dance moves.

After BSB, the girls speak their audience’s inner thoughts: “You think it’s over; it’s not over,” one says off-camera, as Michael Jackson’s “Black or White” comes onto the loudspeakers and the audience enters the third-and-a-half minute of the toast song.

And so begins the tale of the proposal: “John said, ‘I love you so much, my baby, and I want us to be man and wife.’”

And, finally, the girls bring the tempo down, the house down, and the toast home with “Oh Happy Day”—a.k.a., “Your Wedding Day.”

“By far the best part was watching Caitlin’s reaction while we sang—can we call it singing?” Maddie told BuzzFeed News. “More yelling. She was in tears she was laughing so hard.”

As of Friday afternoon, the video of the speech had been viewed 2.4 million times on Vimeo.

“We didn’t hold back—sorry to everyone’s eardrums,” Maddie told BuzzFeed News. “What we lack in talent, we make up for in enthusiasm.”

Greatest wedding toast of all time! from Chair7 Films on Vimeo.