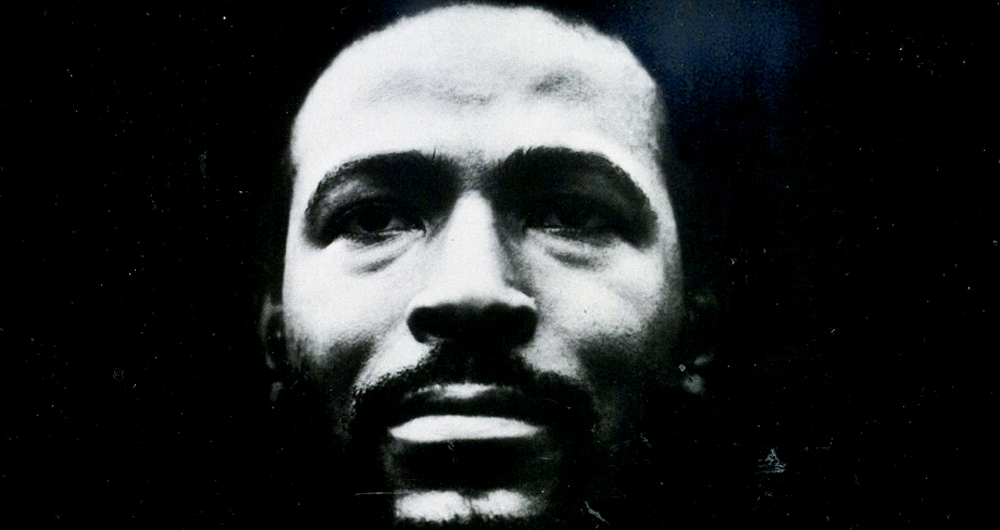 When we think of “lost” albums of the 1960s, we tend to think of rock groups. The Beach Boys’ “Smile,” the Who’s “Lifehouse,” Neil Young “Homegrown.” We don’t typically think of the lost works of the great R&B and soul artists of the era.

A prime example of this would be “Vulnerable” by Marvin Gaye, which will be performed in its entirety for the first time Thursday evening at the Berklee Performance Center (the production is curated and produced by Berklee alumna Meghan Stabile). At the center of attention here will be guest appearances from singers like top 40 phenomenon Aloe Blacc (“The Man” and Avicii’s “Wake Me Up), neo-soul star Bilal and jazz/soul hot-shot Chris Turner. But what really deserves the spotlight is the fascinating story of how the “Vulnerable” album came to be, and the forces which kept it from seeing the light of day. 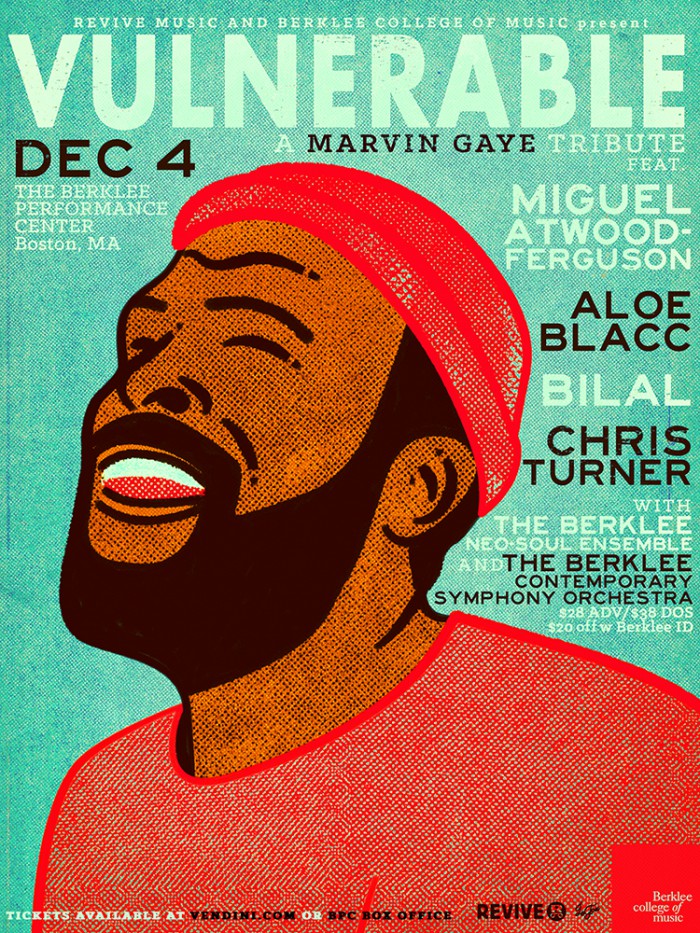 Although he is mostly known for his smash hits for Motown in the early-to-mid 1960s, hits such as “How Sweet It Is (To Be Loved By You)” and “Ain’t No Mountain High Enough” (with Tammi Terrell), Gaye originally came to Motown as a drummer and vocalist with a strong desire to be a jazz-informed crooner in the vernacular of Frank Sinatra. But as history would show, Berry Gordy wanted the incredibly handsome face of Motown to be a pop star. Much of the Shakespearean details of how Motown’s Berry Gordy maintained control over Gaye’s career is common Wikipedian knowledge, (Gordy was not only the patriarch of Motown Records, but also became Gaye’s father in law in 1963) but it does seem to be lost even to the most unhygienic record geeks that Marvin Gaye made multiple attempts to be a jazz-styled crooner throughout his career. If it wasn’t for Berry Gordy, the father figure who even disapproved of Gaye’s landmark 1971 release “What’s Going On” because it was “too political,” Marvin Gaye might have been the next Nat “King” Cole.

Gaye’s debut album, 1961’s “The Soulful Moods of Marvin Gaye” and his 1965 release “A Tribute to Nat ‘King’ Cole” were both footnotes in an otherwise blossoming career as a radio hit-man. However in 1968, just as Motown was pulling Gaye into Hisville USA Studio A to do “I Heard It Through the Grapevine” (his first #1 hit on the Billboard Top 100), Gaye was off in New York City with arranger Bobby Scott recording his third attempt to break into the jazz-vocalist/crooner scene—a group of recordings that would come to be known as the “Vulnerable” album.

But similar to the Beach Boys who had “nerded” themselves out of the Summer of Love and into irrelevance in the late ‘60s with easy-listening albums like “Friends” (Bruce Johnston often refers to the public reception of the Beach Boys in that era as “surfing Doris Days”)–would the public of the late 1960s have accepted Gaye as the new face of late night ballads and silky smooth heartache? Some might say that such an assessment depends on who is singing the song.

“These kinds of songs go over very well when you have a really established superstar doing them,” says world-renowned arranger and event musical-director Miguel Atwood-Ferguson. “But if they are not heard by many people, that’s totally fine too.”

Atwood-Ferguson would know a thing or two about sticking to one’s guns musically. As a session string player and arranger, he has 400 albums to his credit. He has turned down Barbara Streisand. He has played with everyone from household icons like Ray Charles to esoteric mavericks like Flying Lotus. In preparation for Thursday evening’s performance of “Vulnerable” (where he will conduct the Berklee Symphonic Symphony Orchestra) Atwood-Ferguson spent months transcribing Bobby Scott’s original 1968 arrangements for the “Vulnerable” album (arrangements he refers to as “exquisite, elegant, heartfelt”) out of the sheer desire to have this lost Marvin Gaye music heard by the world. A headliner like Aloe Blacc might put people in the seats, but it is this kind of behind the scenes dedication by Atwood-Ferguson that is going to knock the audience off their feet.

“The question I ask myself is ‘how can I make music that is not too esoteric or pretentious sounding, but challenging in a way that makes people care more about the world?’” muses Atwood-Ferguson on the theme of the following one’s own muse. “Hopefully we can continue to educate the general public to get people interested in music of substance that is not just candy music, but is music that can awaken our consciousness.”

Boy that sounds familiar. It sounds like Brian Wilson of the Beach Boys talking about his “teenage symphony to God. It sounds like country-rock legend Gram Parsons talking about his vision of “Cosmic American Music.” But we don’t generally hear this kind of talk when we are talking about soul and r&b music. Even though soul and r&b music influenced so much of everything else. Even though artists like the aforementioned Gram Parsons were covering artists like Aretha Franklin. Even though the holy trinity of Curtis Mayfield, Marvin Gaye and Stevie Wonder could quite handily face off against Elvis Presley, the Beatles, and Bob Dylan. It is as though the sophistication of these supposedly more traditional genres gets lost in the conversation of great 1960’s music.

As time would prove, 1968 was not the right time for Marvin Gaye’s “Vulnerable.” The singer would eventually shelve the album due to his own lack of satisfaction with his vocals and go on to record “What’s Going On,” “Let’s Get It On” and most notably in this case, his 1978 divorce-letter to Anna Gordy, “Here, My Dear.” As anyone who has ever watched Marvin Gaye hold a microphone can attest to, the singer ingeniously developed a singing style that allowed him to take many of the critical elements of crooner style singing and incorporate them into his own sound. This included his charismatic poise and stage presence, his use of microphone control on his powerful yet tender voice (Gaye often sang in a melancholy tone very similar to the sad horns on the “Vulnerable” album) and most of all, his love for the late night ballad. The progression between the standard “Love For Sale” on his first album and “Let’s Get It On” might not seem obvious at first, but given any insight about how Gaye saw himself as a singer, it makes more sense. As the 1970s drew towards an end, Gaye took the nuances of his vocal style to a new high with “Here My Dear,” where jazz-informed, mellifluously conversational “talk-singing” becomes his dominant form of expression. In this brief era for the singer, widely embraced by music critics as one of his most under-appreciated, Gaye was no longer just singing the melody—he was bending it to his will to tell his own story.

It was here finally in 1977 in the sweet-spot of the “Hear, My Dear” era, that Gaye would return to work on the “Vulnerable” album. Gaye re-cut the vocals for the album’s mere seven tracks (and three more alternates for a total of 10 tracks) before shelving the album for good. Although it was referred to by Gaye as “the best stuff I ever did” (in an interview with David Ritz), the collection of standards would not be released until years after the singer’s 1984 death in a 1997 package called “Vulnerable.” Marvin Gaye would have called the album “The Ballads.”

“Marvin Gaye always had this passion for people like Billy Eckstine, Frank Sinatra, and Nat “King” Cole. He loved those guys and he wanted to go in that direction,” says Berklee Ensemble Department Associate Professor Skip Smith, himself a 30 year veteran on the road as a bassist with greats like Dizzy Gillespe and BB King and the director of the Berklee Neo-Soul Ensemble, which alongside the Berklee Orchestra will serve as the backing-band for the performance. “When Gaye went back ten years later to finish the album it was a reflective time in his life. He was going through a rough period in his relationships. These songs are an open book on his marriage and divorce proceedings. They are right up there with “Here, My Dear.” His vocals were on par with what was going on emotionally at that time.”

The critical difference between “Here, My Dear” and “Vulnerable,” and what makes “Vulnerable” so special, is that Gaye is getting his feelings across not through his own original lyrics, but by interpreting the lyrics of the Great American Songbook. So when he sings with guts and sweetness underneath the lilting flutes and swelling horns of “I Wish I Didn’t Love You So” (a Frank Loesser standard), it’s not like being served the same old martini in a lounge. It is accompanied with that unique feeling of peering into the private letters of a turbulent love affair—as only a singer like Gaye can disclose. Irene Higgenbothem’s chestnut “This Will Make You Laugh” becomes a cynical private joke to an ex-lover, as Gaye sings the final notes in a comically deep bassoon-like range.

All things being different, “Vulnerable” probably wouldn’t have been a hit, and Marvin Gaye probably was not meant to be a Vegas mainstay. But one thing these songs do remind us is that sometimes pop singers do have other dreams than just being in the top 40. It could very well be true for some of the special guests that will be channeling Mr. Gaye at Thursday’s performance—and now they have the chance to show what they can do when given the chance to croon some jazz.

“Bilal is a phenomenal singer. He has so much feeling and soul, just like Aloe [Blacc],” says Smith. These guys aren’t just a flash in the pan. They aren’t a creation of someone’s imagination. They are students of the music. And that’s why they are in this concert.”

Enter to win tickets to see Trio Da Kali at The Villa Victoria Center of the Arts (Newton, MA) on April 10th. END_OF_DOCUMENT_TOKEN_TO_BE_REPLACED

END_OF_DOCUMENT_TOKEN_TO_BE_REPLACED

Enter to win tickets to Rhye at The Paradise on February 28th. END_OF_DOCUMENT_TOKEN_TO_BE_REPLACED

END_OF_DOCUMENT_TOKEN_TO_BE_REPLACED

Enter to win a pair of tickets to attend The Hess Collection Seminar and Dinner as part of Boston Wine Festival 2018 at the Boston Harbor Hotel on Wednesday, March 14th. END_OF_DOCUMENT_TOKEN_TO_BE_REPLACED

Her new album has been pushed back, but we have Kimbra’s new single for you. END_OF_DOCUMENT_TOKEN_TO_BE_REPLACED

The folk duo returns with a new record this week. END_OF_DOCUMENT_TOKEN_TO_BE_REPLACED

Now that we’re done looking back at 2017, let’s look ahead at 2018. END_OF_DOCUMENT_TOKEN_TO_BE_REPLACED