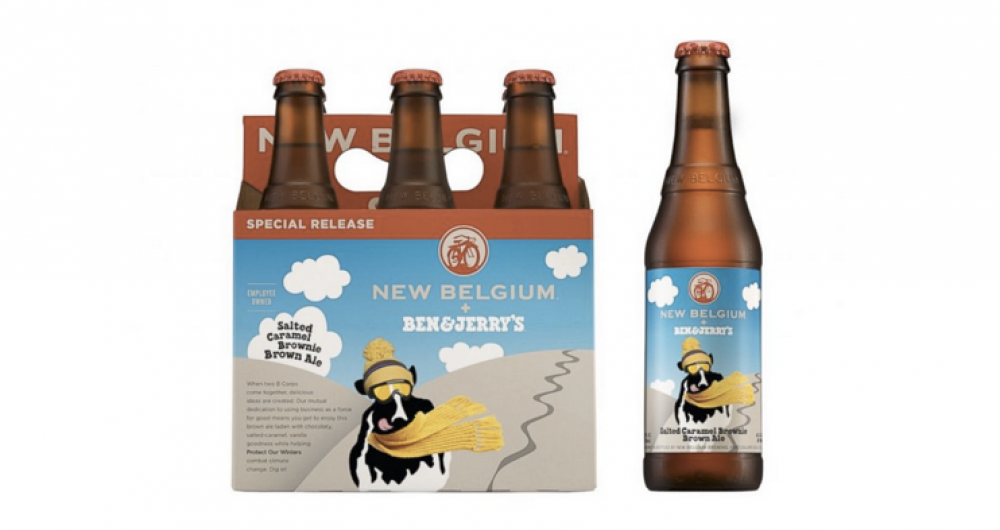 Ben & Jerry’s? More like Beer & Jerry’s. As if anyone needed another reason to think about ice cream and beer in the same thought, the Vermont company will now be concocting a dessert beer.

Teaming up with the New Belgium Brewing company, our two favorite dairymen will bring the world ‘Salted Caramel Brownie Brown Ale’ in fall 2015 which contains 6.2 percent alcohol by volume.

“We’re big fans of New Belgium Brewery, their values, and their fun culture, and of course, their beer,” said senior global marketing manager Jay Curley in a statement. “We’re excited for the campaign we’ve developed together. When two B corps collaborate, our fans can expect something both delicious and impactful.”

More details will be revealed as the year goes on but until then, we’re thinking that a “Half-baked Ale,” a “Phish Food Stout” or even a “Cherry Garcia Cocktail” could be good additions as well.

But if that’s not enough reason to get you excited, burritos just got a whole lot cooler, too. Eating ice cream in a cup or even a cone has become old news as Ben & Jerry’s bring you BRRR-ito. According to their site, it’ll feature “your two favorite flavors, topped with a fudge drizzle and cookie crumbs, all wrapped up in a soft and chewy waffle wrap” and will be available on April 20.

Soon, weekends will become drinking ice cream beer paired with ice cream burritos, topped off by chowing down a tub of their ice-cream for dessert. Our arteries may clog up, but it’ll be so worth it.

Enter to win a pair of tickets to attend The Hess Collection Seminar and Dinner as part of Boston Wine Festival 2018 at the Boston Harbor Hotel on Wednesday, March 14th. END_OF_DOCUMENT_TOKEN_TO_BE_REPLACED

This year, the festival is welcoming more female wine producers than ever before, making up 20% of all winemakers that will be at the festival. END_OF_DOCUMENT_TOKEN_TO_BE_REPLACED

The holidays are here, so raise a glass. END_OF_DOCUMENT_TOKEN_TO_BE_REPLACED

‘Tis the season to mix a nice, stiff drink. END_OF_DOCUMENT_TOKEN_TO_BE_REPLACED

Warm up with Tito’s on your sweater and Tito’s in your glass. END_OF_DOCUMENT_TOKEN_TO_BE_REPLACED

There’s a ton going on at Idle Hands in Malden this spring. Dan McDonnell and Josh Deering joined me in studio to talk about Maifest, what’s new in the Taproom, and their collaboration with The Black Ale Project. Oh, and don’t miss Idle Hands at BeerAdvocate’s Microbrew Invitational next month! END_OF_DOCUMENT_TOKEN_TO_BE_REPLACED

Giovanna Guzman is the marketing coordinator at Kings Bowl, who you can visit in the Back Bay, Burlington, Lynnfield, Dedham, and soon in the Seaport. We talked beverages, naturally, seeing as it’s Thirsty Thursday. And we sampled sangria. And it was soooo good. END_OF_DOCUMENT_TOKEN_TO_BE_REPLACED

These five words might change your life: Farmer Willie’s Alcoholic Ginger Beer. Co-founders Nico Enriquez and Max Easton were in studio with me this morning. Nine-packs and kegs of Ginger Session coming next week! END_OF_DOCUMENT_TOKEN_TO_BE_REPLACED

Chef Avi Shemtov–he of the Chubby Chickpea and Single Guy Cookbook–was back in for a visit this morning to talk about his latest venture. TAPPED is a mobile beer catering company that specializes in on-site draft pours of both craft beers and mainstream brands. Thirsty yet? END_OF_DOCUMENT_TOKEN_TO_BE_REPLACED