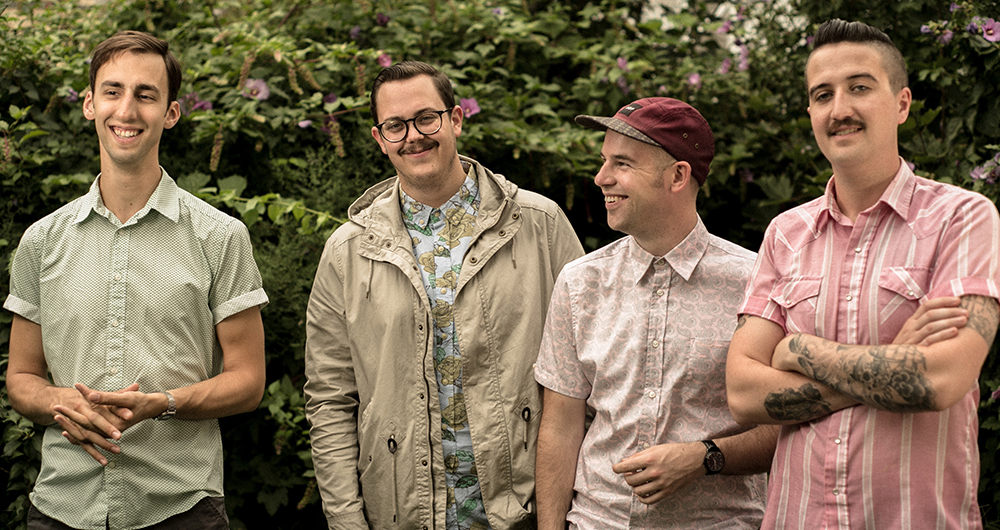 “We try to make it so people aren’t looking at us when we perform–they should be focusing on dancing and letting loose,” states Dave Martineau of Bearstronaut. “We want the crowd to see that we have fun onstage so they know it’s OK to do the same.”  The multifaceted artist behind the playful Boston-based quartet comes off as eager for the release of Bearstronaut’s first full length, but unsure of when it will actually happen. “All we’ve done so far are EPs and some of the stuff we’ve already put out will be on the record. We don’t know the official release date yet, since we’re not on a label or anything. But it’ll be early 2015 at the absolute latest.”

Martineau didn’t divulge what direction their debut album will venture into, but Bearstronaut has mastered a sound over the years that listeners have come to expect. Their method of fusing sophisticated incursions of rhythm and repetition with percolating disco decorum is their signature, but Martineau hinted at a change in the band’s creative process that will impact their music as a whole. “I tend to write most of the lyrics, but on this record, everybody is bringing as much as they can to the table. And with other people collaborating, it just puts new life into writing.” The boys also plan on stepping outside their comfort zone. “With a lot of the new stuff, we’re pushing people’s expectations of us by pushing what we’ve already done. We added darker elements to some songs–we just want to see what we’re capable of at this point.”

Despite playing an array of impressive local venues (including last September’s Boston Calling), Martineau remains humble about Bearstronaut’s collective journey. “We are so appreciative of friends and family who’ve supported us from the beginning and have been to every tiny show we’ve done. We are also grateful to the people who take chances to see us without knowing who we are.” He views this Friday’s gig at the Great Scott as an opportunity to gain even more listeners. “People often come to our shows with no intentions of seeing a band like us. We just make it work to our advantage.”

Perry Eaton writes for Boston.com. Perry Eaton talks on the radio with me from time to time. Today, he talked to me about what he’s been listening to and some upcoming shows and festivals worth checking out. Click here to read more. END_OF_DOCUMENT_TOKEN_TO_BE_REPLACED

In some ways, Palehound has always had a home in Boston. END_OF_DOCUMENT_TOKEN_TO_BE_REPLACED

Kal Marks is the kind of band that sneaks up on you. Whether you’re experiencing them at some basement show in Allston, or in an opening set for Pile at Great Scott, you may not see them coming, but they’ll immediately click. The combination of heavy sludgy riffs and lead singer Carl Shane’s unique crooning bowls you over. It’s dark and it’s compelling, but most importantly, it’s really earnest. END_OF_DOCUMENT_TOKEN_TO_BE_REPLACED

It’s not very often that some of the most talented performers in Boston are set to grace the same stage in a single night. This Sunday marks the 1 year anniversary of Mind Spray, a local hip-hop open mic and showcase series devised by promotion and booking company The Brain Trust. END_OF_DOCUMENT_TOKEN_TO_BE_REPLACED

There’s been a lot written about Street Dogs evicting a group of neo-Nazis from the pit at their House of Blues, Anaheim show on St. Patrick’s Day. You don’t need to read any of it. Just listen to front man Mike McColgan tell the story. He talks about joining his old band, Dropkick Murphys, on stage in Boston last week, too. END_OF_DOCUMENT_TOKEN_TO_BE_REPLACED

It’s not her best. END_OF_DOCUMENT_TOKEN_TO_BE_REPLACED

When in Nashville, do as the locals do. Since relocating to Tennessee a few months ago, this seems to have been Steven Tyler of Aerosmith’s approach after announcing in an October Twitter Q&A session that he intended to record a country album, an endeavor he’s well in the process of completing. END_OF_DOCUMENT_TOKEN_TO_BE_REPLACED

“I’m Shipping Up To Boston” just turned ten years old. Boston.com’s Matt Juul put this piece together on the history and significance of the Dropkick Murphys song, then joined me in studio to talk about it. END_OF_DOCUMENT_TOKEN_TO_BE_REPLACED

Boston is a city known for it’s Irish heritage, and it’s celebration of it. Two main traditions have held strong in Boston: the St. Patrick’s Day Breakfast and subsequent Parade. But I argue there is a third now: seeing the Dropkick Murphys at the House of Blues during their multi-night March Residency. END_OF_DOCUMENT_TOKEN_TO_BE_REPLACED

Sure, you might see a punk show on Monday and a chillwave band on Thursday and so on, but usually you favor one sound over another because you’re a busy bee and time is honey. It’s been the same for years, and the Prefab Messiahs can vouch. END_OF_DOCUMENT_TOKEN_TO_BE_REPLACED