BC and BU Grads Team Up to Create New Dating App, ‘Who’s That’ 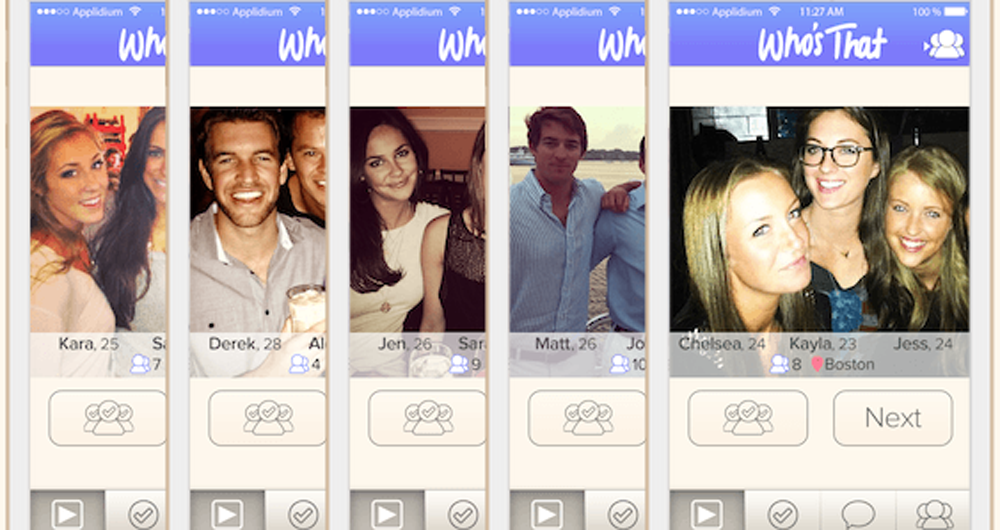 With so many dating sites out there catering to so many oddly specific demographics — clowns, the Amish, ugly people — it seems like there couldn’t possibly be room for any more. But a dating site launched in Boston by two recent graduates is hoping to find room in the crowded dating app market by catering to group dates among friends.

“Who’s That” was founded on January 2, 2014 by Sam Davidson and his business partner Brian Sachetta after the two graduated from Boston University and Boston College respectively in 2012. The site matches groups of three together and suggests bars known to be great date spots for the groups to meet.

“Nervousness disappears almost immediately when you’re out with your friends and having fun,” Davidson said. “The goal of our app is to make you feel like you just happen to meet another great group of people out naturally. And worse comes to worst you have a night out with your buddies, which is probably more exciting than what you’d be doing at just chillin’ at home anyway.”

When the app first launched, it was only available to college students in Boston, but as of July 8, it was made available to non-students in the area who were interested in the app’s group date approach. The “Who’s That” user network has 4,7000 users as of August 8 according to the Boston Business Journal, but continues to grow each month, the result of young entrepreneurs embracing the modern dating world with an efficient method and a realistic attitude.

“People are busy with work and living life. As nice as it may seem to casually meet a cute guy or girl in line at Starbucks it just doesn’t happen that often,” explained Davidson. “There’s nothing wrong with taking extra measures to optimize your dating life.”

With the help of Davidson, we’ve put together a how-to guide for using “Who’s That,” as well as general advice on how to get the most out of the app.

To add someone to your group, you select from your repertoire of Facebook friends, hopefully ones you know are down to have a good time. They don’t have to have the app themselves, but it is “more fun and way less overwhelming,” according to Davidson, to sign up with other people. In fact, it’s the whole point: you can be in as many different groups of three as you want.

It’s hassle-free to sign up, and the app posts a little bio for each group member, which is a major difference between Who’s That and the other major group dating app, the New York-based Grouper. “The purpose of the bio is to eliminate the first five minutes of standard small talk, Davidson said. “So you can immediately get onto other things, but with a little background.”

Every person in a given group has the ability to invite or accept an invitation from another group to go out. “We put a huge emphasis on actually going out,” said Davidson. The app allows you to invite another group out by selecting two dates and times that work for your group within the next week. The receiving group can either agree to one of these proposals or respond with a new date and time proposal. This can continue back and forth through app-invites or instant messaging between groups, but there is a concierge who can assist in setting up the date if needed.

As far as communication goes before the date takes place, Davidson recommends keeping it at a minimum. “The chat feature is typically used more for logistics: finalizing the when and where.” He also doesn’t encourage too much social media stalking before the date takes place. “You should base your opinions on someone off of actually meeting them. There’s no way you pick up on someone’s personal vibe from a box on their Facebook profile.”

“Who’s That” has a helpful feature that allows you to select from over a dozen bars here in the city as your date location. To avoid “no shows,” the app requires groups to order the first round of drinks at their chosen venue as collateral.

Going Out on the Date

Currently, “Who’s That” is working with different bars and suppliers here in Boston to provide affordable service and a social atmosphere for the excursions orchestrated through the app. Davidson pointed to bars that provide a mix of good music as well as quiet sections to talk as ideal dating spots.

Of course, in keeping with the app’s push for a natural date setting, Davidson acknowledged that expectations and planning need to be employed in moderation. “It seems more fun to go with the flow and just let things happen however they were supposed to, Davidson said. “But having at least a rough plan takes the pressure off.”

Luckily for current “Who’s That” users, our city provides opportunities for pre-, mid-, and post-date activities. “Boston is a cool walking city,” Davidson said. “Even after a date is over, you can easily walk with your date to a local coffee shop or restaurant.” He recommends Harvard Square as a great area to check out new places and just walk around and get to know someone.

What Davidson and Sachetta have created is an app with the same convenience of some other dating services, but with the advantage of an existing support system of friends. Incorporating an existing support system of friends into user’s dating lives eases the first-date fears of loneliness rejection. Once other cities realize that there is a more comfortable and safe dating app out there, “Who’s That” won’t be a Boston-based secret for much longer.

Enter to win a pair of tickets to attend The Hess Collection Seminar and Dinner as part of Boston Wine Festival 2018 at the Boston Harbor Hotel on Wednesday, March 14th. END_OF_DOCUMENT_TOKEN_TO_BE_REPLACED

Boston band Funeral Advantage is Tyler Kershaw. And Tyler Kershaw had a fun childhood, so it seems. END_OF_DOCUMENT_TOKEN_TO_BE_REPLACED

Perry put me on to daephne and the album blew my mind. END_OF_DOCUMENT_TOKEN_TO_BE_REPLACED

END_OF_DOCUMENT_TOKEN_TO_BE_REPLACED

It was great having Meredith Goldstein back in studio this morning to talk about the latest edition of Love Letters. Listen to our chat and you’ll figure out why I chose the song I chose to go along with today’s letter. END_OF_DOCUMENT_TOKEN_TO_BE_REPLACED