Bar talk: Obama in Boston, mail-order condoms, no meat for you 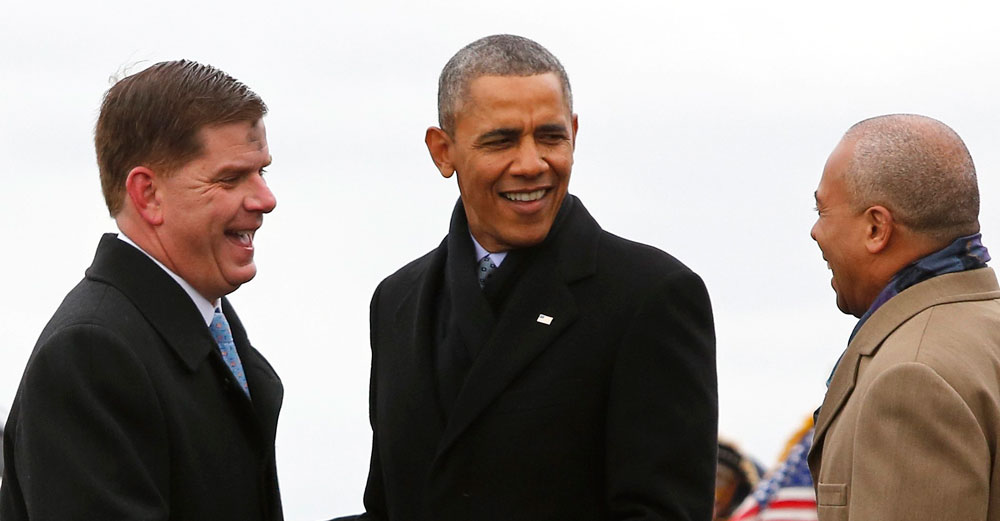 People are feeling litigious and angry these days, probably because they’re sick of presidential traffic jams and they can’t get their meat fix. If that didn’t make any sense to you, you may be behind on this week’s news. Never fear. We’re here to keep you looking suave and informed at the bar this weekend, so you can use your condom of the month (read on, it will all be explained).

The Supreme Judicial Court has ruled that “upskirting” is both legal and now officially a verb. After hearing the case of a man accused of photographing up women’s skirts on the Green Line, the state’s highest court ruled that voyeurism laws don’t apply to people who are clothed. Trend alert, ladies: Culottes and testicle-crushing heels are about to come into style in Boston. UPDATE: In response to the public outrage this ruling inspired, state legislators swiftly passed a bill to update the existing criminal voyeurism law, making “upskirting” (also known as sexual harassment) illegal. We still support testicle-crushing heels, though.

A California businessman is suing the Downtown Grand casino in Las Vegas for allowing him to gamble away $500,000 and serving him drinks when he was blackout drunk, which is kind of their business model.

Negotiations to let gays march in the South Boston St. Patrick’s Day Parade have degenerated into both sides taking press release pot shots at one another. You tried, Marty.

President Obama visited Boston on Wednesday, causing traffic jams, protests, and swooning from diehard Democrats. He spoke at the Artists for Humanity Epicenter, which is surely the tame “Apples to Apples” of the artist convention space community.

Film location scouters are sniffing around Southie, searching for realistic homes and kitchens that have remained untouched since the ’80s for one of two Whitey Bulger period pieces in production now. So if your idea of redecorating is fake blood splatter  … you should probably still call HDTV, not these guys.

The now-viral “I, too, am Harvard” project, which shows photos of black Harvard students holding signs displaying some of the racist things they’ve heard/experienced on campus, proves that the Ivy League, like the rest of the world, is not short on ignorance. It also confirms our suspicions that, in addition to strident intellectual standards, Harvard has an unspoken excellent facial symmetry requirement. And that, friends, is how you hit on an entire college campus in two sentences.

A new study from the University of Southern California has found that eating too much protein is bad for you, horrifying protein shake-gulping body builders, paleo dieters, and bacon-wrapped brisket enthusiasts to sing, “If this is wrong, I don’t want to be right” while rubbing pork loin all over their faces.

You think you’re cold? No. Government Reform Committee Chairman Darrell Issa (R-Calif.) is ice cold. He completely ignored his colleague, Elijah Cummings (D-Md.) during a congressional hearing in which former IRS head Lois Lerner plead the fifth … again. Play this video if you want to make everyone super uncomfortable.

It’s like fruit of the month club, except it’s not an appropriate gift to get your grandma: A monthly condom subscription service called “The Cocksman Club.” The company was started by—brace yourselves—a former Harvard Business School frat boy. We’re all for engaging in safe, consensual sex, but what we can really get behind is an over-confident bro carrying around his condoms in a case adorned with a rooster in a top hat.

Global warming being declared a planetary emergency is like _____

Taking the essay portion of the SATs is like _____

Extra credit if you can use the words “cowlick,” “defenestration,” and “weasel” in your answer.

Enter to win a pair of tickets to attend The Hess Collection Seminar and Dinner as part of Boston Wine Festival 2018 at the Boston Harbor Hotel on Wednesday, March 14th. END_OF_DOCUMENT_TOKEN_TO_BE_REPLACED

Boston band Funeral Advantage is Tyler Kershaw. And Tyler Kershaw had a fun childhood, so it seems. END_OF_DOCUMENT_TOKEN_TO_BE_REPLACED

Perry put me on to daephne and the album blew my mind. END_OF_DOCUMENT_TOKEN_TO_BE_REPLACED

While many have called out Davis since a video of her refusing to issue a marriage license to Rowan County residents David Moore and David Ermold went viral in July, relationship columnist and gay activist Dan Savage went a step further on MSNBC Tuesday night, saying that “this is about someone hypocritcally looking to cash in”. He added: “And she is a hypocrite.” END_OF_DOCUMENT_TOKEN_TO_BE_REPLACED