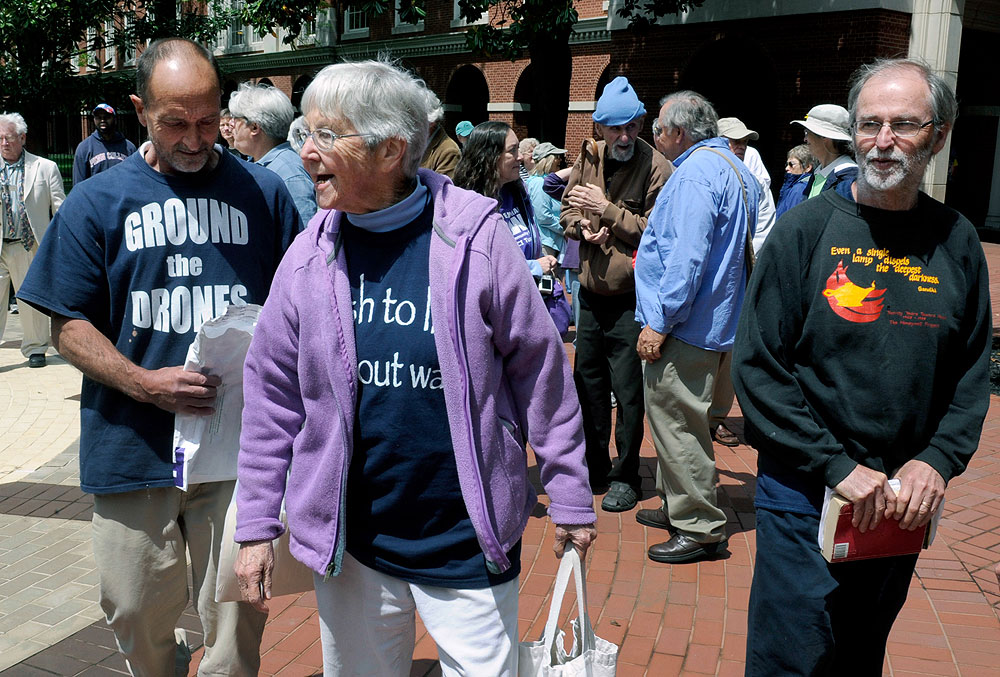 It’s getting to the point where slushy, greying snow and black ice have topped the list of things you hate, beating out world hunger, bigotry, columns about lazy millennials, and the gov’ment. You’re sick of falling on your hands, and so you’ve stopped going outside on weekends. Your closest companion is now a cube-shaped lamp that is supposed to cure your seasonal affective disorder. You’ve begun talking to him, and you’ve made him a tiny hat. Listen: It’s time to leave the house. Take a cue from all the tough-as-nails women in the news this week, dress up Lampy in his finest fedora, and brave the ice so you can have a conversation with some real people. We’ll get you started with some small talk.

A man shoveled out the driveway of an elderly couple in Lowell, then demanded money of them even though they’d never requested his services. He was eventually scared off when the 79-year-old wife answered the door with her trusty gun. Police have confirmed she has a license to carry, and to break down all of your grandma stereotypes.

In more tough old broad news, an 84-year-old Catholic nun was sentenced to three years in prison for breaking into and vandalizing a nuclear weapons facility in Tennessee. In doing so, she risked electrocution and dog attack just so she could splash red paint and strew baby bottles around the bunker to send a message about weapons used against innocent civilians. She told the sentencing judge not to be lenient on her, and that she would consider it “an honor” to die in jail.

The deadly clashes in Kiev continue, with protesters stoking a barricade of fire around Independence Square to protect themselves from police. We don’t have a snarky joke for this one, just thought you should know, in case your media consumption time has been eaten up by a “House of Cards” vortex.

A guy actually named Casanova hit on a woman on an MBTA bus … and struck out (must have been that missing S). So he did what anyone would do in the face of rejection — he threatened and attacked the bus driver, and then a police officer. Another classic tale of love and adventure for the history books.

Cossacks whipped and beat members of Pussy Riot while the group staged either a protest or a music video in Sochi. Watching the video on the Washington Post’s website is fairly harrowing, especially since its followed by footage of celebrants chanting “USA! USA!”

The nation’s first poop transplant bank has opened, offering life-saving stools for those suffering from Clostridium difficile, a potentially fatal condition that occurs when antibiotics kill off the necessary bacteria in your colon. OpenBiome, located — where else? — in beautiful Cambridge, Massachusetts, is not currently accepting donations, because they have a “team of donors hard at work,” which means that somewhere out there in the Cambridge bar scene, there are several people with “stool donor” on their resume. It is now your mission in life to find one of them.

Enter to win a pair of tickets to attend The Hess Collection Seminar and Dinner as part of Boston Wine Festival 2018 at the Boston Harbor Hotel on Wednesday, March 14th. END_OF_DOCUMENT_TOKEN_TO_BE_REPLACED

This year, the festival is welcoming more female wine producers than ever before, making up 20% of all winemakers that will be at the festival. END_OF_DOCUMENT_TOKEN_TO_BE_REPLACED

The holidays are here, so raise a glass. END_OF_DOCUMENT_TOKEN_TO_BE_REPLACED

‘Tis the season to mix a nice, stiff drink. END_OF_DOCUMENT_TOKEN_TO_BE_REPLACED

Warm up with Tito’s on your sweater and Tito’s in your glass. END_OF_DOCUMENT_TOKEN_TO_BE_REPLACED

There’s a ton going on at Idle Hands in Malden this spring. Dan McDonnell and Josh Deering joined me in studio to talk about Maifest, what’s new in the Taproom, and their collaboration with The Black Ale Project. Oh, and don’t miss Idle Hands at BeerAdvocate’s Microbrew Invitational next month! END_OF_DOCUMENT_TOKEN_TO_BE_REPLACED

Giovanna Guzman is the marketing coordinator at Kings Bowl, who you can visit in the Back Bay, Burlington, Lynnfield, Dedham, and soon in the Seaport. We talked beverages, naturally, seeing as it’s Thirsty Thursday. And we sampled sangria. And it was soooo good. END_OF_DOCUMENT_TOKEN_TO_BE_REPLACED

These five words might change your life: Farmer Willie’s Alcoholic Ginger Beer. Co-founders Nico Enriquez and Max Easton were in studio with me this morning. Nine-packs and kegs of Ginger Session coming next week! END_OF_DOCUMENT_TOKEN_TO_BE_REPLACED