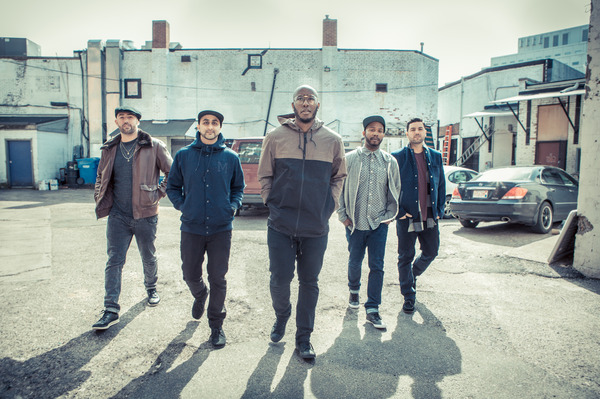 When Prince shows up during your set and stays ‘til the end, you know you’re doing something right. And that’s exactly what happened the last time locals-done-good Bad Rabbits played Los Angeles. The reigning champs of Boston pop and R&B were in town to perform on “The Arsenio Hall Show” and were featured on the triumphantly-returned late-night staple on Sept. 24, within two weeks of the program returning to the air. The “Arsenio” performance itself didn’t go over as well as they’d hoped, as demonstrated by the critical backlash that followed via Twitter (well, except for Sinbad, he was pretty into it), and the guys were feeling kind of down about it. Cut to the after-party, at LA’s Sayers Club: Salim Akram, Bad Rabbits guitarist who moonlights as DJ Ask A Black Dude, was getting ready to hit the decks to spin when suddenly security comes in and starts clearing out tables. Because Prince called.

“I didn’t meet him, but I saw him with my own eyes, in the flesh,” Akram says. “Every once in awhile, Prince will call and say, ‘I want to play,’ and he’ll play a five-hour set into the wee hours of the morning or just show up and sit in with whomever’s there.”

Unfortunately, The Purple One didn’t sit in with the band but it was still a bizarre situation, playing a self-admitted lackluster set for one idol only to seemingly impress another hours later. But this is the kind of thing Bad Rabbits are getting more accustomed to every day. By the end of 2013, the group will have a volley of epic firsts under its belt: first time repping the city at a major festival (Boston Calling), first true international jaunt (to the UK), the release of its first proper full-length “American Love,” and an insane tour behind it that had the band sharing stages with Kendrick Lamar and Steve Aoki. It may only be a matter of time before they get so big that Arsenio’s got them on speed dial and we can no longer claim them as our own. So we took the opportunity to catch up with Akram before things truly pop for the funkified five-piece.

Q. What was your initial reaction when you guys got booked for the Arsenio Hall Show?

A. I was stoked. Arsenio was a staple growing up in a black household. When I got to stay up late, it was to watch Arsenio. His show was massive in the ‘90s. As a kid growing up watching that show, it was definitely influential. “Coming to America” and his presence in pop culture were a huge part of the music of the ‘90s house party era that influenced [the band’s 2009 EP] “Stick Up Kids.” In urban, contemporary R&B — whatever it’s called now, the urban market — Arsenio was breaking bands. He did an interview with Ice Cube and he was talking about how he broke artists like Guy and Teddy Riley and a lot of these other artists who went on to be legendary. To have even the consideration of being on “The Arsenio Hall Show” — let alone in the first couple of weeks of his return — was dope. It could’ve gone two ways: they could’ve gotten terrible ratings and gotten canceled within the first month or the opposite. And fortunately, we were on “Arsenio” right when the ratings were high and the feedback for the show was positive.

Q. Arsenio’s different from other late-night hosts, too, in that he interviews the artists and treats them as guests as opposed to talent. Or at least he used to.

A. It really depends on the timing but yeah. There have been shows where he’ll walk up when the artist is done and ask a couple of questions or someone like Kendrick Lamar or Snoop will do a couch interview. It depends on the caliber of the artist and if they have something they need to say. With Kendrick, they were talking about the “Control” verse, so Arsenio was like, “Do you have anything you want to say to people out there?” Kendrick was kind of introverted about it and didn’t really say much and Arsenio was like, “Speak, brother! I have this platform for you to speak, the people want to know what you have to say, and that’s why I have this show: For you to tell your story!” The interview portion isn’t necessarily like, “Hey, promote your latest record.” It’s more about giving artists a chance to speak.

Q. Did you wind up sitting down with him?

A. The interview we did wound up getting cut, unfortunately. Sometimes that happens because of time.

Q. You’re no strangers to late-night, with appearances on “Jimmy Kimmel Live!” and “The Late Late Show With Craig Ferguson.” Each host has their own degree on the likability scale. Fallon’s supposedly friendly; Letterman is notoriously cold. What was Arsenio like?

A. With Kimmel, we did the handshake and then we went live. When he had the record cover in his hand, he had literally just walked off the stage after introducing us. Craig Ferguson, we got a bear hug and we got to hang out and talk to him for a bit. With Arsenio, we got to talk to him for 15, 20 minutes. When we were sound-checking, Arsenio came out, like, in his pajamas.

A. Yeah, his sweat suit or whatever. And he was dancing during our sound check, just hanging out and vibing to the music. You can tell that he has a little more of a pulse of what’s going on with his show musically. I’m not saying the other late-night hosts don’t. I’m just saying the vibe that we got is that he was aware of the artists that were being booked on his show. Other shows, and I could be completely wrong, they leave the talent up to the booker. Arsenio, his purpose is a little bit different and he showcases music in a different sense.

Q. From what I understand, you guys didn’t feel too hot about how you performed on “Arsenio.” What happened on the show and what the hell happened afterward on Twitter?

A. We’re our own worst critics and we’re harder on ourselves, but we didn’t perform at the level we’re capable of. Our drummer [Sheel Davé] made the analogy while we were evaluating the performance afterwards that we’d lost as a team. You have a star player, a quarterback, for instance, and whether it’s the running back who makes three fumbles in the game or the quarterback throws four picks, the team loses together. This is probably the first time where the general response was consistent with how we felt the performance was, which is a little shocking and disheartening at the same time. The Internet doesn’t lie. People have no reason to lie. Your homies will gas you up and say your shit was great when you played the worst show ever and got too drunk and missed every note. For us, it didn’t feel like the performance was a proper representation of the brand.

A. I know! I do it because it’s just fun to see what people are saying, but they can be harsh. We just evaluated it and what we tried to achieve, it didn’t come across the way we had anticipated it, unfortunately. “We Can Roll” felt more natural and the general consensus was, “That’s the Bad Rabbits we’re used to.” The thing that bummed us out the most about the “Dance With You” performance was that we had the opportunity to be introduced to a completely different audience. That’s very, very tough. You can’t go out there and half-ass it, because the audience will be very critical. It was interesting to look at the comments and say, “I can see that!” But at the same time there were people who loved the performance. It’s just the first time in our career where we got a mixed bag of a response, and for us, being super critical of our craft, we were like, “They’re kind of right.”

Q. It seems like this late-night gig meant more than the others just because of your nostalgic connection to Arsenio, so I’m sure that’s doubly disappointing when the show doesn’t go perfectly.

A. Absolutely. The one comment that pissed me off was from Robert Glasper. We don’t try to talk shit on anyone on the Internet and he was blatantly honest and dead-on with what he was saying, but the way he came across with it was disappointing because we all love his music and he’s someone that we look up to. He basically called it the worst musical “performance” — in quotes and everything — that he’d ever seen in his life. It’s a total bummer, and at the same time, it’s like, we look up to his music. Our fans came to our defense, all “It wasn’t their best performance, but check out their music before you make a sweeping generalization about them.” You would assume someone like that wouldn’t be such a dickhead about it but he was brutally honest, which was fine. Everyone’s entitled to their opinion. But you can’t be reckless, too.

Q. What happened when Prince watched Bad Rabbits at the after-party?

Q. So you took them out.

A. Oh no, we couldn’t take them out. If he didn’t like it, he would’ve left. But he stayed, so it was tolerable to Prince. We played “Can’t Back Down” last, and the funny thing is that that song was tentatively called “Prince,” for all the synth sounds and shit. “Can’t Back Down” was inspired by a Prince song.

Enter to win tickets to see Trio Da Kali at The Villa Victoria Center of the Arts (Newton, MA) on April 10th. END_OF_DOCUMENT_TOKEN_TO_BE_REPLACED

END_OF_DOCUMENT_TOKEN_TO_BE_REPLACED

Enter to win tickets to Rhye at The Paradise on February 28th. END_OF_DOCUMENT_TOKEN_TO_BE_REPLACED

Her new album has been pushed back, but we have Kimbra’s new single for you. END_OF_DOCUMENT_TOKEN_TO_BE_REPLACED

The folk duo returns with a new record this week. END_OF_DOCUMENT_TOKEN_TO_BE_REPLACED

Now that we’re done looking back at 2017, let’s look ahead at 2018. END_OF_DOCUMENT_TOKEN_TO_BE_REPLACED

Our first Song of the Week for 2018. END_OF_DOCUMENT_TOKEN_TO_BE_REPLACED

In a year when so many things were off, the music was right on. END_OF_DOCUMENT_TOKEN_TO_BE_REPLACED