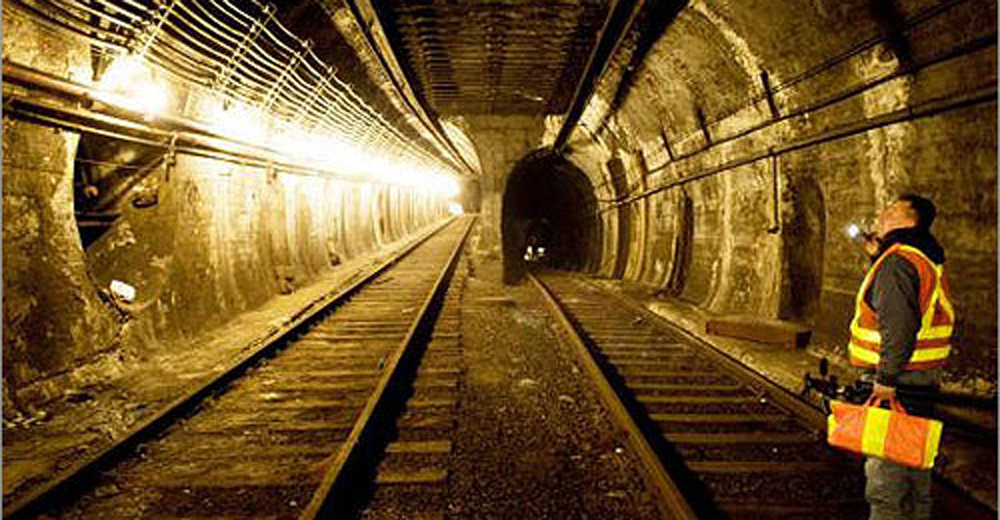 There has been an increasing fascination with the abandoned theatre beneath the M. Stienert & Sons piano store on Boylston Street on the Emerson Campus, a space we explored late last year. Unfortunately, the belief that this theatre space will be renovated and reopened is more or less wishful thinking, as store owners assure that they have no plans for its resurrection.

We may not need it though. According to a report by Joshua Coe for WECB, Emerson’s news radio station, two architects have their eyes on tunnels below Emerson’s strip of Tremont Street to build and open a theatre space.

According to Ng in the WECB piece, the duo won a competition called SHIFT Boston Ideas Competition in 2009. “Our idea was to transform this abandoned subway tunnel,” he says. Ng claims that the two are focused on converting it into a performance space for improv and black box theatre, but the report also says that he and Zarzycki have visions for the tunnels, which have been closed for subway use since 1961, to, “have a museum, space for street performers, shops, small black box theaters, and even a larger performance venue which could hold concerts and plays.”

This would be huge news for the local arts community if these plans take shape, but therein lies the struggle. The two are busy working on a business plan for their tunnel conversion, and they admit that their first task will be funding.

“The key for us is to develop this kind of package that answers community needs but is also feasible financially and also recognizes the historic past,” says Zarzycki in the report.

While these plans seem hopeful, and certainly beneficial, it seems like a stretch to even label them “plans” just yet. After funding, the very tricky task of permitting in Boston presents another very big road block, not to mention that, although this idea seems extremely cool, the moving and shaking involved would involve a number of different departments and organizations all operating on the same page, dedicating time, money, and resources. Sadly, that doesn’t sound very characteristic of Boston.

There is hope though, and the two claim that they have the support of the MBTA, and were given access to the tunnels. We can only hope that these visionaries can act on these ideas. I mean, how rad would this be?

Abe Rybeck, founder and Executive Artistic Director of The Theater Offensive was in studio this morning to talk about ClimACTS! Bounce, which celebrates art loud and proud at Royale on Wednesday, May 3. END_OF_DOCUMENT_TOKEN_TO_BE_REPLACED

Melanie Gillespie is an author and the founder of Mel O’Drama School of Acting in Milton. She was in studio this morning to talk about her latest book Darlene and the Drama Queen and how acting can help kids to develop confidence. END_OF_DOCUMENT_TOKEN_TO_BE_REPLACED

We’re not suggesting coconuts migrate, but we are suggesting that you see Spamalot at North Shore Music Theatre, two weeks only, September 27 through October 9. Click here to grab your tickets, and click “more” to hear my interview with Brad Bradley, who plays Patsy. END_OF_DOCUMENT_TOKEN_TO_BE_REPLACED

You know Dracut, MA native Scott Grimes from television’s American Dad and ER. You know Bob Guiney from The Bachelor and The Bachelorette. But did you know the two are teaming up to raise funds for the Dracut Performing Arts Program? END_OF_DOCUMENT_TOKEN_TO_BE_REPLACED

This year, you’ll notice something different at The Nutcracker. Boston Ballet soloist Sabi Varga talked about what’s new for this year’s production and his unique perspective on the Ballet’s holiday tradition. END_OF_DOCUMENT_TOKEN_TO_BE_REPLACED

While many have called out Davis since a video of her refusing to issue a marriage license to Rowan County residents David Moore and David Ermold went viral in July, relationship columnist and gay activist Dan Savage went a step further on MSNBC Tuesday night, saying that “this is about someone hypocritcally looking to cash in”. He added: “And she is a hypocrite.” END_OF_DOCUMENT_TOKEN_TO_BE_REPLACED