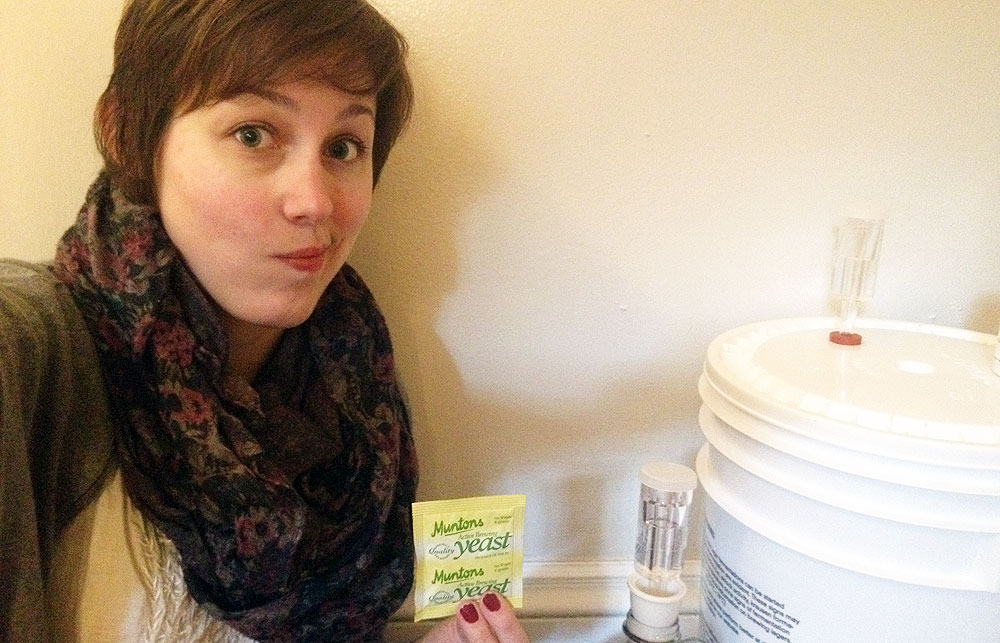 I’m not really sure why I’ve been under the impression that cider making is a big challenge, because it really isn’t — well, it doesn’t have to be. I’ve been procrastinating the whole way, dreading that I was going to have to take the time to do some big involved project for the actual fermentation step. It’s literally so simple though — yeast + apple juice + airlock = fermentation started, hopefully.  It’s so much easier than homebrewing beer. In fact, the same day I started my cider, my housemate started his first batch of homebrew beer, a process which took several hours and seemed pretty tricky, as it involved both fire and ice.

If you read my last two posts on getting ready to make hard cider and juicing apples, you know that I am trying two methods of cidermaking — one with the wild yeast of the apples and one with store bought apple juice and packaged yeast. I also want to apologize for using the word “yeast” so often in this post, because that is one of my most hated words, right up there with “moist.” Unfortunately, yeast doesn’t have any synonyms (look it up).

For the home-juiced cider: I was advised to add raisins because they add good wild yeasts and additional sugar for the fermentation. I procrastinated almost a whole week for pretty much no reason. I put my cider in the fridge, which supposedly doesn’t kill yeast, and I really hope that didn’t somehow ruin it. Finally, on Saturday, I went to Whole Foods, purchased one scoop of organic raisins from the bulk bin and put about half of them into the one-gallon carboy of cider I had juiced. I topped the bottle with a water-filled air-lock and put a t-shirt over it to keep out the light. So far nothing’s really happening with it except a few of the raisins floated to the top.

For the store-bought pasteurized cider: I sanitized my six-and-a-half-gallon fermenting bucket and poured in five gallons of Massachusetts-made preservative-free cider. I followed the instructions on the packet to dissolve the yeast in water and then mixed it into the cider. I added the recommended amount of “yeast nutrient,” which came with my cider-making kit and stirred it all together using a sanitized stainless steel spoon. I then secured the lid, added my airlock, so it was ready to go. Fingers-crossed that it works.

Most of the literature I read recommended the optional method of making a yeast-starter, which should be done 24 hours in advance of “pitching” the yeast into the cider. I forgot to do that a day early, so I skipped that step, in hopes for the best.

For both methods of cider-making: I will have to consider whether I want to add sugars (or honey!) to my cider with the intention of yielding a product with higher alcohol percentage. It is recommended to add sugar little-by-little over the course of a week or so. At this stage, the ideal temperature for fermentation is about 65 degrees.

Once the primary fermentation is over in a few weeks, I will have a bunch of other choices I need to make, like whether or not I want to do a secondary fermentation in a five-gallon carboy or if I want to bottle it right away. I will also need to choose what types of bottles to use and whether I want a sweet or dry cider and if I want to make a sparkling cider or a flat cider. There are additional steps to take and considerations to be made for each of these options.

I’m thinking I’m going to stay in this experimental mindset and attempt multiple methods. I don’t own a five-gallon carboy, so unless I can borrow one, I will probably be skipping that step because I don’t feel like spending any more money on this already slightly-expensive project. I really want to try making a carbonated cider but I’m terrified that the bottles will explode. I think I want to bottle mostly using screw-top growlers because it seems easier. So for the next couple of weeks, I plan on drinking a lot of growlers of BBC and requesting that my friends do this, as well, and save the bottles for me.

Multiple sources have recommended keeping a “cider journal” to record every detail of every step taken in order to make the cider. I love this idea and I can see how it would be very helpful if I ever want to try this again. I will have a great record of my process and will know which methods worked well and what can be changed for an improved outcome next time.

Now is time to exercise my patience skills. Cider will be ready to drink in three to five months — if all goes well.

Enter to win a pair of tickets to attend The Hess Collection Seminar and Dinner as part of Boston Wine Festival 2018 at the Boston Harbor Hotel on Wednesday, March 14th. END_OF_DOCUMENT_TOKEN_TO_BE_REPLACED

This year, the festival is welcoming more female wine producers than ever before, making up 20% of all winemakers that will be at the festival. END_OF_DOCUMENT_TOKEN_TO_BE_REPLACED

The holidays are here, so raise a glass. END_OF_DOCUMENT_TOKEN_TO_BE_REPLACED

‘Tis the season to mix a nice, stiff drink. END_OF_DOCUMENT_TOKEN_TO_BE_REPLACED

Warm up with Tito’s on your sweater and Tito’s in your glass. END_OF_DOCUMENT_TOKEN_TO_BE_REPLACED

There’s a ton going on at Idle Hands in Malden this spring. Dan McDonnell and Josh Deering joined me in studio to talk about Maifest, what’s new in the Taproom, and their collaboration with The Black Ale Project. Oh, and don’t miss Idle Hands at BeerAdvocate’s Microbrew Invitational next month! END_OF_DOCUMENT_TOKEN_TO_BE_REPLACED

Carl Isaacs, General Manager of Renewal by Andersen of Boston joined me in studio this morning to talk about a special offer: save 20% on windows and patio doors and your installation is included. Listen in for the details! END_OF_DOCUMENT_TOKEN_TO_BE_REPLACED

Giovanna Guzman is the marketing coordinator at Kings Bowl, who you can visit in the Back Bay, Burlington, Lynnfield, Dedham, and soon in the Seaport. We talked beverages, naturally, seeing as it’s Thirsty Thursday. And we sampled sangria. And it was soooo good. END_OF_DOCUMENT_TOKEN_TO_BE_REPLACED

These five words might change your life: Farmer Willie’s Alcoholic Ginger Beer. Co-founders Nico Enriquez and Max Easton were in studio with me this morning. Nine-packs and kegs of Ginger Session coming next week! END_OF_DOCUMENT_TOKEN_TO_BE_REPLACED