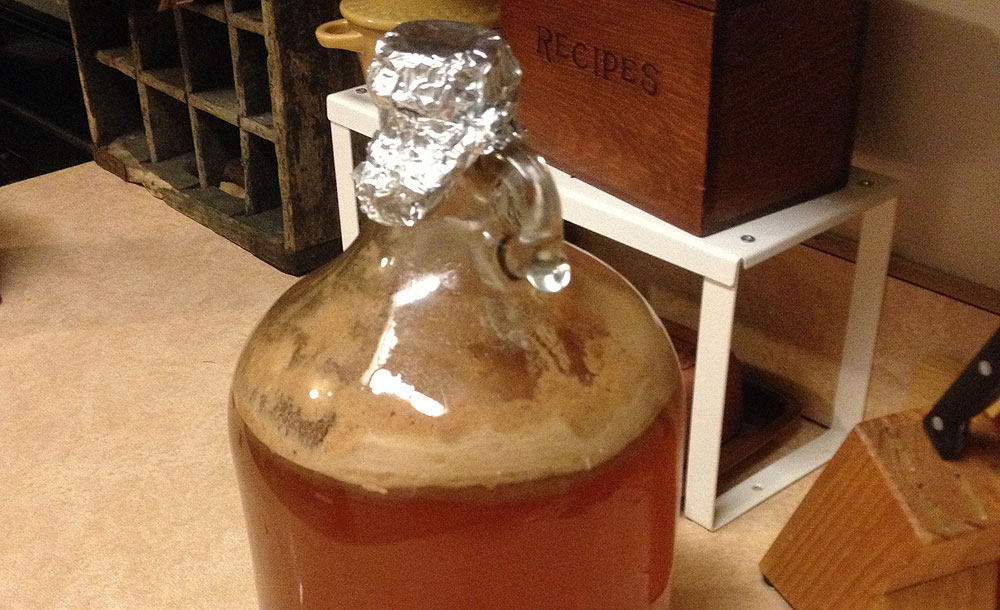 If your house looks anything like mine right now, apples are spilling out of the pantry. New England had an especially abundant apple season this year and apple picking is a fall tradition. If you’re sick of baking and bored with packing apples for lunch every day, there’s one great way to finish off that stock: Juice those suckers. For the adventurous DIYers out there, take on a new project — fermenting the apples for a delicious homemade hard cider.

As I explained in my last blog post for BDCwire about preparing to make hard cider, the process can be a fairly easy or quite complex process, depending on the methods you choose. The first choice I needed to make was to decide between starting with raw or pasteurized cider.  It’s illegal for stores to sell raw juice, so other than finding a farm that will sell it straight off the cider press, the only way to get it is to juice the apples at home. Juice from stores or farm stands is supposed to be pasteurized in order to kill any potential harmful bacteria and the wild yeast in the cider.

People made cider for centuries without pasteurization and some hard cider makers still like to make it with raw juice even though this can be risky, due to higher potential of contamination by bacteria. Raw cider also contains natural yeasts of the apples, which can either yield good or bad results. It’s always a gamble. I talked with an experienced cidermaking friend about feeling intimidated by all the choices I would have to make and complained that none of the books I read had a really solid set of instructions.

“That’s what’s so cool about making cider,” my friend told me. “You kind of just figure it out as you go along. It’s real DIY.” He went on to call cidermaking and fermenting a punk activity, likening it to the DIY punk movement of collecting found foods, growing and making stuff yourself, and just seeing how it turns out. So I’m gonna set aside my fears of a bad outcome and I’m just gonna do this.

Because I suck at making decisions, I plan on trying both methods. I’m going to make a big batch of cider using store-bought juice and the method recommended by my guide books, but I’m also making a small batch of totally natural cider with unpasteurized apple juice. I considered going so far as juicing with a hand-cranked apple press, but I opted not to, because I didn’t want to buy a juice press and I do have a juicer —  plus, ain’t nobody got time for that. (Yeah, I know. Electric juicers are so not-punk.)

It took me almost two hours and 50 apples to get a full gallon of juice — even with my juicer. I then realized I wasn’t supposed to fill it up all the way because the fermentation makes it bubble a lot and it could spill over. I solved this problem by pouring myself a glass and adding some whiskey, sort of a hard cider for cheaters. Just in case this batch fails, at least I was able to enjoy one pint of the fruits of my labor.  (See what I did there?)

Throughout the process of juicing the apples, I kept a few important things in mind that I had learned during my research:

1. Sanitize. Contaminants on the surfaces of the cidermaking gear cause bad bacteria or turn the cider into vinegar. I mixed a one-gallon batch of sanitizer and poured it on the components of my juicer, funnel, knives, cutting boards, glass carboy, and countertops. Even though the sanitizer was labeled “no rinse,” I rinsed in cold water anyway, since I was weirded out by leaving residue of a cleaning product on my cidermaking gear.

2. Keeping fruit flies out of the cider. Fruit flies are apparently one of the biggest offenders for ruining a batch of cider. My apartment inherited an infestation from the previous tenants who moved out in September. I caught a bunch using vinegar traps but there were still a few flying around on juicing night. So I made sure to put a lid (tinfoil) on my carboy after each time I poured in a new batch of fresh juice. I also rinsed off the funnel after each use and rinsed every apple immediately before tossing it in the juicer.

3. No bad apples. One bad apple can spoil a batch. Back in the day, orchards used to sell the drops to cidermakers at discounted prices. Farms now usually won’t sell drops because of food safety risk — it’s more likely that these apples contain harmful bacteria that could ruin cider, like e. coli, due to exposure to wild animals. I made sure to carefully inspect each apple before juicing it. I cut off bruises and any areas where the apple skin was broken and cut them in half to be sure nothing weird was going on inside. I threw away any apples that appeared to have very rotten spots or were overly-bruised.

For the easiest method, go to the store and choose an apple juice or cider that is UV pasteurized and contains no preservatives. It won’t contain any natural yeast, so it will be necessary to add packaged yeast. The sanitization and fruit fly rules still apply to the store-bought cider method, though, as it is of the utmost importance to keep contaminants out of the cider at all stages of brewing.

Come back next week for my third and final post on my first cidermaking experience, where I will discuss some loose guidelines for fermentation and the options cidermakers have at this stage. As a total cider nooB, I welcome the advice of any experienced readers out there about the next steps I’ll need to take.

Enter to win a pair of tickets to attend The Hess Collection Seminar and Dinner as part of Boston Wine Festival 2018 at the Boston Harbor Hotel on Wednesday, March 14th. END_OF_DOCUMENT_TOKEN_TO_BE_REPLACED

This year, the festival is welcoming more female wine producers than ever before, making up 20% of all winemakers that will be at the festival. END_OF_DOCUMENT_TOKEN_TO_BE_REPLACED

The holidays are here, so raise a glass. END_OF_DOCUMENT_TOKEN_TO_BE_REPLACED

‘Tis the season to mix a nice, stiff drink. END_OF_DOCUMENT_TOKEN_TO_BE_REPLACED

Warm up with Tito’s on your sweater and Tito’s in your glass. END_OF_DOCUMENT_TOKEN_TO_BE_REPLACED

There’s a ton going on at Idle Hands in Malden this spring. Dan McDonnell and Josh Deering joined me in studio to talk about Maifest, what’s new in the Taproom, and their collaboration with The Black Ale Project. Oh, and don’t miss Idle Hands at BeerAdvocate’s Microbrew Invitational next month! END_OF_DOCUMENT_TOKEN_TO_BE_REPLACED

Carl Isaacs, General Manager of Renewal by Andersen of Boston joined me in studio this morning to talk about a special offer: save 20% on windows and patio doors and your installation is included. Listen in for the details! END_OF_DOCUMENT_TOKEN_TO_BE_REPLACED

Giovanna Guzman is the marketing coordinator at Kings Bowl, who you can visit in the Back Bay, Burlington, Lynnfield, Dedham, and soon in the Seaport. We talked beverages, naturally, seeing as it’s Thirsty Thursday. And we sampled sangria. And it was soooo good. END_OF_DOCUMENT_TOKEN_TO_BE_REPLACED

These five words might change your life: Farmer Willie’s Alcoholic Ginger Beer. Co-founders Nico Enriquez and Max Easton were in studio with me this morning. Nine-packs and kegs of Ginger Session coming next week! END_OF_DOCUMENT_TOKEN_TO_BE_REPLACED