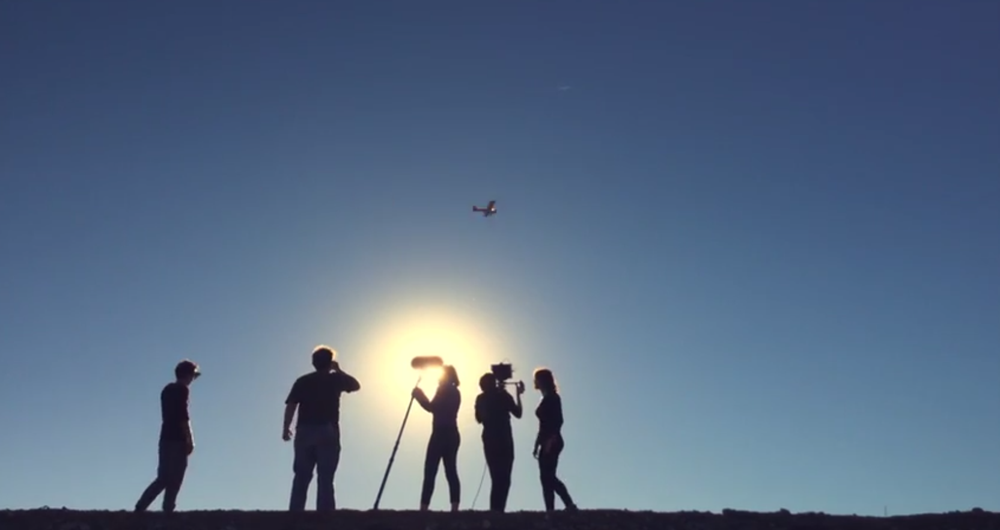 Five years ago, Apple ran their very first iPad commercial during the Academy Awards. This year, the company whose phones have turned more people into amateur photographers and filmmakers than ever before proved the iPad’s staying power by shooting their commercial using only an iPad.

According to Mashable, the commercial features real footage from high school students at Los Angeles County High School for the Arts who were assigned to shoot a movie with an iPad. Edited together, the one-minute spot looks as sleek as any high-budget ad shot with professional equipment.

The commercial also features a voiceover by famed filmmaker Martin Scorsese taken from his commencement speech to the NYU Tisch School of the Arts Class of 2014, talking about the film process and his disdain for the phrase “follow your dream.”

You can’t do your work according to the people’s values. I’m not talking about ‘following your dream,’ either. I never like the inspirational value of that phrase. Dreaming is a way of trivializing the process, the obsession that carries you through the failure as well as the successes which could be harder to get through.

If you’re dreaming, you’re sleeping. It’s important and imperative to always be awake to your feelings, your possibilities, your ambitions. But you also know this, for your work, for your passions, every day is a rededication.

Painters, dancers, writers, filmmakers, it’s the same for all of you, all of us. Every step is a first step, every brush stroke is a test, every scene is a lesson, every shot is a school. So, let the learning continue.

Call it what you want, but being able to shoot a high-quality film of any length on an iPad seems like a dream to us.

A decade of Wreck The Halls. END_OF_DOCUMENT_TOKEN_TO_BE_REPLACED

HUBweek came to Boston, and we were there to take it all in. END_OF_DOCUMENT_TOKEN_TO_BE_REPLACED

Golden Globe and Emmy nominee Benjamin Wallfisch is the composer responsible for the score of the hit movie IT. I talked to Ben about his approach to scoring the new version of this iconic story and his thoughts on film and music overall. Some very insightful commentary; listen in. END_OF_DOCUMENT_TOKEN_TO_BE_REPLACED

Rupert Gregson-Williams is an award-winning film composer. He just so happened to compose the score for this summer’s big blockbuster Wonder Woman. We talked about his beginnings in film scoring, film scores that move and inspire him and, of course, Wonder Woman. END_OF_DOCUMENT_TOKEN_TO_BE_REPLACED

Jeff Rapsis is a New England-based composer and performer. Lately, he’s been creating live musical scores for silent film screenings. I talked to him about his process and a few of his upcoming performances at The Capitol Theatre in Arlington and the Somerville Theatre. You can keep track of where else Jeff is scoring silent films here. END_OF_DOCUMENT_TOKEN_TO_BE_REPLACED

Leah Wellbaum from Slothrust brought her trusty six-string to Studio B and turned in the first RadioBDC Session of 2017. Check out her three songs and her chat with Julie Kramer, recorded live on February 28, 2017. END_OF_DOCUMENT_TOKEN_TO_BE_REPLACED