Andy Brickley’s Thoughts: How do the Bruins Match Up with the Red Wings? 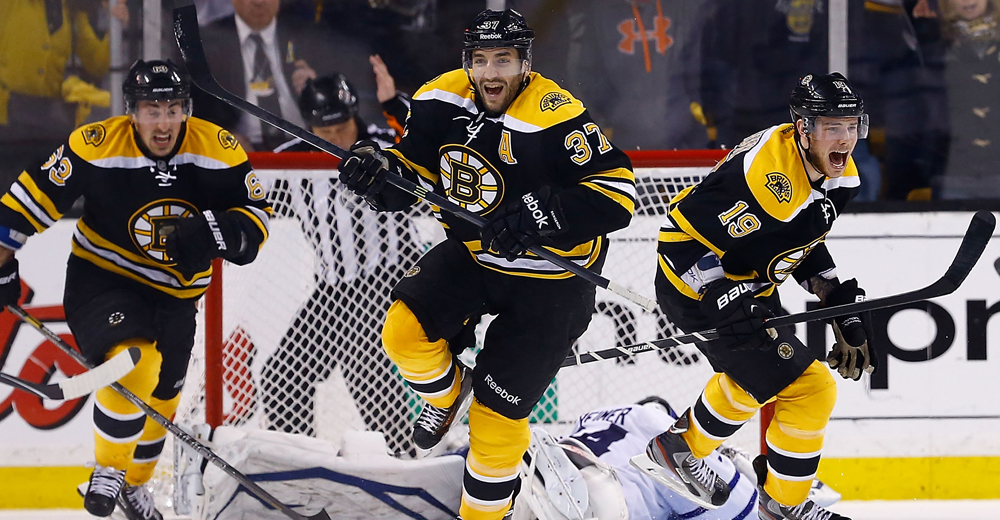 It feels like yesterday that the Bruins fell in Game 6 of the Stanley Cup Finals against the Chicago Blackhawks, missing out on their second championship in three years.

Yet it also feels like an entire ice age has come and gone since that night last June when a 2-1 lead turned into a 3-2 loss in the span of 17 seconds within the final 1:16 of the game. This year’s playoffs couldn’t have come soon enough and tonight, they’re finally here.

The Bruins have been on a mission since that heartbreaking loss to Chicago, ripping off a 15-1-1 stretch that included a 12-game winning streak in March, never losing more than two games in a row all year, winning the President’s Trophy, given each year to the team with the most points in the NHL, and earning home ice advantage throughout the postseason. They changed out a few key parts from last year’s Cup finalists while barely missing a beat, and enter this postseason even deeper and better. Some of the names may be different but the style of play, the superiority of leaders like Zdeno Chara and Patrice Bergeron, and the steadying influence of coach Claude Julien all remain the same.

This is why the Bruins have garnered so much praise, locally and nationally. They are the prevailing favorites, not only in this first round series against their Original Six brethren the Detroit Red Wings, but to bring another Cup back to Boston as well.

But let’s not get too far ahead of ourselves quite yet. Instead, we can turn to NESN Bruins analyst and friend of BDCWire Andy Brickley to get more insight on the impending battle with the Wings, who are making their 23rd consecutive trip to the playoffs, but due to being members of the Western Conference until this year, haven’t met the Bs in the postseason since 1957.

For starters, Brickley sees no problem with this matchup, despite a bit of concern about the Wings’ exceptional team speed and skating ability potentially giving the bigger, heavier Bruins some trouble.

“It really just comes down to a will to win,” said Brickley, who played in his fair share of postseason games with the Ray Bourque/Cam Neely-led Bruins of the late ’80s and early ’90s. “You have to beat four really good teams to win a Cup. A tough test early on like this one sets the right kind of emotional, mental, and physical tone for two months of playoff hockey. Detroit has a tremendous will. They will provide that challenge. Yeah, it will be a tough series, but again, you have to beat four good teams. It doesn’t matter to me when you play ‘em.”

The Red Wings, who are usually near the top of the standings, as opposed to being an eight seed as is the case this year, scratched their way into the playoffs despite a spate of injuries as miserable as any team in the entire league. They still managed to beat the Bruins in three of the four meetings between the two teams this year, which may explain some of the trepidation regarding this matchup. In the Wings, Brickley sees a team that is very capable of causing some concern despite all of its health related issues.

“They’re very well coached,” said Brickley. “(Mike) Babcock is one of the best in the business. He really coached them up through all the major injuries and was able to develop young talent. They have a great structure, a great game plan and a great system. They get results. There are a lot of emerging young players on that roster who are playing with an accelerated learning curve thanks to the injuries. They have an experienced goalie in Jimmy Howard who knows how to steal games if he gets hot. And they have that speed and that skill. This is a team with a history and an aura, especially when they play at home. It’s a model franchise.”

It certainly is. Those 23 straight playoff appearances have yielded four Stanley Cups, the most recent of which came in 2008. The Wings made it back to the Finals the following year but lost to the Pittsburgh Penguins and haven’t gotten past the conference semifinals since. Still, neither that nor their fall to the role of major underdogs should make them any less formidable, especially to a Bruins team that has done most of its recent postseason damage as an underdog itself and has been forced to play into overtime of Game 7 in the first round each of the last three years.

Still, the Bruins are now regarded as a model franchise too. Brickley sees the team as “deeper, more balanced, more physical, better at possessing the puck, heavier, stronger and more menacing.” They are also healthier, despite Detroit’s nearly being back to full strength. The Wings’ star forward, veteran Henrik Zetterberg, who had back surgery earlier in the year, is back skating with his teammates but remains unlikely to play in this series. And their other, longtime offensive force, Pavel Datsyuk, played in just 45 games during the season (tallying just 37 points, his lowest total since his rookie season of 2001-2002), and only recently returned from six weeks off due to a knee injury.

The Bruins might be missing penalty killing aces Daniel Paille and Chris Kelly for Game 1 tonight, as neither has practiced yet this week. But for the most part, Boston’s top horses are ready to roll. The continued good health of the Bs front line corps will be crucial to their overall success, according to Brickley.

“To me, the biggest concern is if any of the top nine forwards suffer a significant injury,” he said. “If you lose any one of those guys, it will disrupt what the Bruins are all about.”

Brickley feels like if there’s an X-Factor for the Bruins in this series, it will come on special teams, where the Bruins, who have always been an excellent penalty killing outfit, were also far stronger on the power play this season, when they ranked third in the NHL, than in years past. This includes 2011, when they brought home the Cup despite a power play that more often than not looked like it was skating in mud.

“Special teams will always play a big role, especially if you expect close games,” said Brickley. “The Bruins power play is much more meaningful than it’s been the past few years. The personnel are better thanks to guys like Jarome Iginla and Torey Krug and Carl Soderberg and Dougie Hamilton. They can run two effective units out there. When you bring in talent like they have that knows how to operate, you have a chance to enjoy a really healthy advantage. There’s a lot of depth on their power play, a lot of different tandems they can use.”

The Bruins may have the edge on the power play, enjoy better health and have a superior goaltender in probable Vezina Trophy finalist Tuukka Rask. But will the series be a blowout? Highly unlikely. The margin for error is always thin, no matter which team has the upper hand on paper and that’s the beauty of the NHL playoffs. If you don’t believe it, just ask anyone who played for the Bs at this time last year, when the Toronto Maple Leafs turned a 3-1 series deficit into a three-goal, Game 7 lead with under 10 minutes to play, before Milan Lucic took over, the Bruins erased a two-goal Toronto lead in 31 seconds and wound up winning in OT en route to the Cup Finals. It’s unlikely that this year’s opening round series will follow a much similar path. But you never know in the playoffs.

“There’s such a fine line between winning and losing,” said Brickley, who doesn’t expect any one-sided games but still sees the Bruins advancing to the Eastern Conference semifinals with relative haste. “Every team, even the underdog, if it plays to its strengths, can give the favorite a hard time through certain stretches. It’s just the nature of playoff hockey.”

Indeed. Bruins in 6. Mark it, dude. And see you in the next round.

Enter to win a pair of tickets to attend The Hess Collection Seminar and Dinner as part of Boston Wine Festival 2018 at the Boston Harbor Hotel on Wednesday, March 14th. END_OF_DOCUMENT_TOKEN_TO_BE_REPLACED

The Black and Gold continue their run tonight at TD Garden. END_OF_DOCUMENT_TOKEN_TO_BE_REPLACED

Who will make the Class of 2018? END_OF_DOCUMENT_TOKEN_TO_BE_REPLACED

It’s been awhile since we talked Black and Gold. END_OF_DOCUMENT_TOKEN_TO_BE_REPLACED

You’re going to wish you were in the Northern Alps. END_OF_DOCUMENT_TOKEN_TO_BE_REPLACED