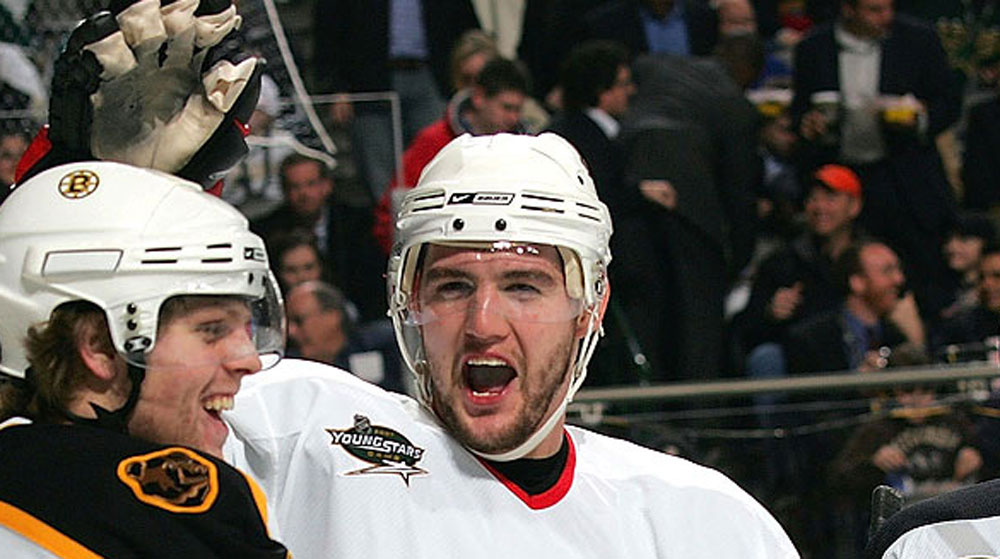 For the second year in a row, the Boston Bruins were buyers at the NHL trade deadline. And this year, just like in 2013, they were bridesmaids instead of brides.

It was no secret going into yesterday’s 3 p.m. deadline that the Bs were looking to bolster their blueline with a big-minute defenseman. Sources linked the Black and Gold to Buffalo’s Christian Ehrhoff, Ottawa’s Chris Phillips, and the New York Islanders’ Andrew MacDonald as fill-ins for the injured Dennis Seidenberg. Most hopes hinged on MacDonald, who has averaged over 25 minutes per game while leading the NHL in blocked shots at 198. As it goes, negotiations fell through after the Isles reportedly asked for a first rounder and/or Ryan Spooner as compensation, and MacDonald ended up getting shipped to Philadelphia for an AHLer and a pair of picks.

Serendipitously, this opened the door for the Bruins to poach 28-year-old former first rounder Andrej Mezaros from the Flyers’ defensive stable. Being no stranger to coming up second in a big player derby, that’s exactly what GM Peter Chiarelli did.

Mezaros has Senators roots that undoubtedly put him on Chiarelli’s radar. He comes with decent playoff experience, and his chemistry with former teammate and fellow Slovak Zdeno Chara should not be discounted. But his year-to-date stats (17 points and a +1 rating in only 38 games) give little cause for hope.

History is also not on Mezaros’ side. The Bruins have made a nasty habit of going into the trade deadline looking to fix a hole on their back end. A premier D-man has been on their March shopping list for the past decade, and every year they have scooped a blueliner in hopes of bringing home some playoff hardware, but the results have rarely been in their favor.

Here’s a closer look at defensemen the Bruins have landed at the trade deadline in the past few years.

*Picked up off post-deadline waivers from St. Louis

Though swapping a conditional third round pick for Mezaros isn’t exactly a ransom, the Bruins have fallen into a pattern of aiming high and missing big, and their behavior since this first whiff does not bode well for Mezaros’ future in Beantown.

In 2004, the Bruins were big time players for the Cup, finishing second in the East to eventual Stanley Cup winners Tampa Bay. At the deadline, they acquired Gonchar from the Washington Capitals to finalize their playoff push. In the end, it was for naught. They were bounced by Montreal in the quarterfinals, and Gonchar would go into the 2005-06 lockout without a commitment to the Bs.

Though he only played 15 games in the hometown colors, Gonchar left a lasting scar on the Bruins’ front office, who have been reluctant to gamble on a big-name D-man since.

After sitting out 2005-06 for the lockout and standing pat on defensemen in 2006-07, Chiarelli netted two wins with Wideman and Seidenberg (though Wideman was acquired in a non-playoff season and he only gets a positive mark for being the bait that eventually brought Nathan Horton and Greg Campbell to town). Somewhere in the middle, the organization brought in feckless, slow-footed bum Steve Montador, but it wasn’t until 2011 when the Bruins finally worked up the gall to gamble on another marquee blueliner.

In 2011, Chiarelli finally negotiated Czech puck-mover Tomas Kaberle away from Toronto. At the time, the Bruins were the strongest they had been in years, and Kaberle looked like the finishing touch that they needed to secure a Stanley Cup run. The Bruins did eventually hoist Lord Stanley’s trophy at the end of the year, but Kaberle was a total non-factor in the campaign. The Bruins ended up losing two good picks for one of the least deserving players to ever receive a Cup ring.

Burned again, Bruins’ brass resorted to their old ways. In 2012, Greg Zanon (and his beard) was picked off the scrap heap. In 2013, it was Chiarelli’s ol’ buddy Wade Redden. Both played a single ill-fated run before taking their places alongside Paul Mara, Shane Hnidy, David Tanabe, and Joe Corvo in the Pantheon of Forgettable Bruins Defensemen.

The question is, will Mezaros be the next to join their ranks?

With Seidenberg back next season, it’s unlikely Mezaros signs a new deal with the Bruins, which means, like Montador, Zanon, and Redden, he’ll most likely be another lame-duck pickup by a front office that’s too snakebitten to go big on deadline day.

The Black and Gold continue their run tonight at TD Garden. END_OF_DOCUMENT_TOKEN_TO_BE_REPLACED

Who will make the Class of 2018? END_OF_DOCUMENT_TOKEN_TO_BE_REPLACED

It’s been awhile since we talked Black and Gold. END_OF_DOCUMENT_TOKEN_TO_BE_REPLACED

You’re going to wish you were in the Northern Alps. END_OF_DOCUMENT_TOKEN_TO_BE_REPLACED

END_OF_DOCUMENT_TOKEN_TO_BE_REPLACED

Bill might be “on to Tennessee,” but we’re not. END_OF_DOCUMENT_TOKEN_TO_BE_REPLACED