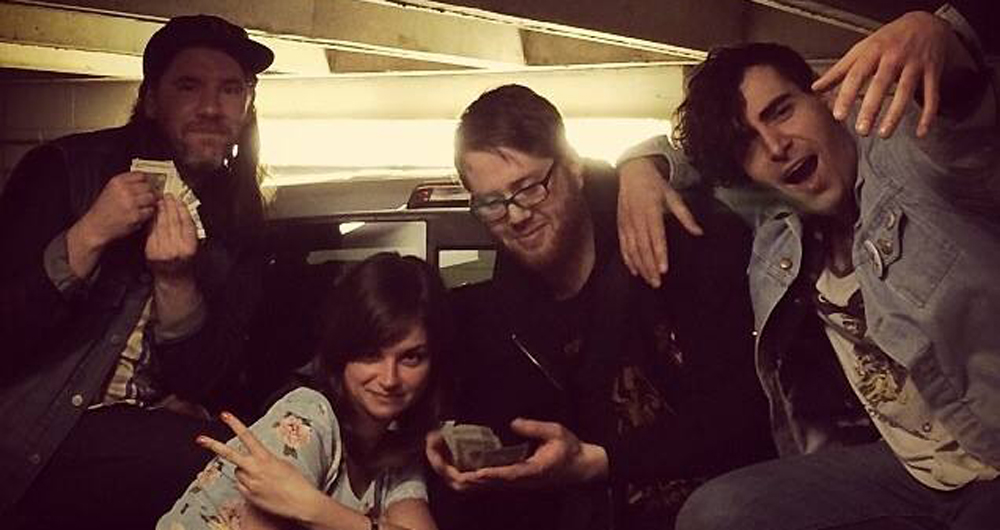 Most bands at South By Southwest have something to prove, blitzing through three twenty-minute sets a day, in between breakfast tacos, in order to get their music into the ears of a bunch of people who’d never heard of them before. Others park the band van somewhere south of the river, get plastered on Shiner Bock and try not to wind up in a headlock from the burly ex-biker bouncer at the Parish or Swan Dive so that they can watch their former touring buddies smash their guitars to pieces.

All leave Austin with a handful of stories to share and ton of hard work to be proud of, but what happens when you’re heading to SXSW for the sake of expanding your fan base, and introducing your music to handful of industry folks if you’re lucky, and you’ve already tried that? What makes you decide to return year after year, even if a big break isn’t exactly the immediate goal? Why even go if you’ve gone for a ride at the SXSW rodeo before?

Mean Creek has been there and done that, and they had a blast at South By Southwest—but not because they played by the festivals “rules for success.” “We actually left our heart and some blood on each stage,” says guitarist Aurore Ounjian, somewhere on Congress. Mean Creek is about to head home to Boston, but the band stopped in for one last set off the main drag—a So So Glos show at a tiny craft cocktail bar—and they’ve got time to kill. “That’s all we could do. We had the best time, because we were like, ‘Fuck it, let’s have some fun!’ and we did.”

Mean Creek’s SXSW playbook? Don’t take too seriously the fact that Lady Gaga is playing in a giant Doritos vending machine down the street, try to see as many of your friends from out-of-town as you can, and plow through the new stuff like the fate of your forthcoming record depends on it. No strangers to 6th Street, Mean Creek trekked southward to SXSW for the third time with an arsenal of new songs—namely, the track list from “Local Losers,” out April 8—at the ready.

The band has debuted material at festivals before, and the scream-treatment of “The Comedian,” along with other songs from 2012’s “Youth Companion,” made for memorable sets at on the SXSW and beyond. Over the course of the past three years especially, lead vocalist and guitarist Chris Keene has truly come into his own as a front man, transforming from the approachable, slightly shy guy who works the door at TT’s and the Middle East, into the kind of singer who allows the intensity of the words he’s written to course through his veins under the glare of a spotlight. When Keene squeezes his eyes shut and starts preaching about the importance of friends and the people you love before leaping into “Young And Wild,” you listen; when a bunch of Boston folks filter into Valhalla to catch Mean Creek on the second to last night of SXSW, Keene makes a point to call out every recognizable face in the audience and dedicate a song to them. It’s SXSW, sure, but Mean Creek approaches its sets at the festival the same as it would at any other show, and mostly because they’re well aware of what the festival means for them and what it doesn’t at this point.

“I used to read books about musicians and a lot of them would mention that they would come [to SXSW] and that it was sort of the beginning of their music career going to another level, but that was 15+ years ago,” says Keene. “I don’t know that that happens anymore. Maybe it does and I’m not aware of it or something, but it seems like the festival has changed greatly and I don’t think it’s about an unknown artist getting known. It’s about the Doritos stage, you know? It’s hard to be heard when there are five million bands here and Lady Gaga. Soon, I don’t think people will give a shit about Lady Gaga. There’s nothing going on there, it’s intellectually vacant, and I feel like people are getting sick of that stuff, rightfully so. I feel like that stuff is dying. My hope is that more real and passionate music is going to take its place. For instance, Lorde: she’s a much more intelligent pop star than Lady Gaga, and it’s awesome to see someone like that have a huge hit with this phenomenal song. I think people might be getting sick of whatever the hell that stuff is.”

And that’s where Keene and the rest of Mean Creek get a little help from their friends in Austin: they stuck around after the So So Glos set to hug their friends and say hello; they made a point to catch a few other bud bands, despite their own show schedules while they were in town, and got bowled over by The Hold Steady before it was time for them to head to the airport.

“We made sure to see friends’ bands,” says Ounjian. “Potty Mouth is on our label, but they’re also friends of ours. I wanted to end this week with So So Glos and they’re so stoked to play wherever they are, be it a swanky cocktail bar in Austin or Shea Stadium in Brooklyn. They played that Spurs game last night at the AT&T center! They probably gave the same performance there as they did tonight.”

If coming to Austin for Mean Creek means playing a bunch of rad parties and potentially catching the eye of a major label, or a talent buyer who can’t wait to book them in a new city, great—but that’s not going to make or break the band’s festival experience. Let Gaga have the Doritos stage. They’d rather kick it at a dive with former tour mates, inspire new fans, and get inspired by the bands they already love– preserve that aspect of festival culture.

“The focus was on having a blast playing music and playing these new songs on this new record and enjoying that and each other, because we’re family at this point. It was definitely the most fun I’ve had here, ever. That’s mainly why we came down. That’s the romantic part of SXSW, getting to do all that stuff. That’s what you realistically get out of it.”