Amy Poehler Is Shameless in the Most Inspiring Way Possible

Today’s edition of “Awesome People Who Were Recently Honored and Deserve It” features Boston’s (okay, Burlington’s) own Amy Poehler.

Harvard’s Hasty Pudding Theatricals has named the comedian/actress/producer/author/badass their Woman of the Year, which means that on Jan. 29 she’s going to be paraded through the streets of Cambridge accompanied by Hasty Pudding men in drag and then the subject of a roast at the hands of the theatrical organization.

Poehler’s had a hell of a 2014. She filmed the final season of her wickedly funny and award-winning TV show “Parks and Recreation,” she published her memoir, “Yes, Please,” which debuted at #1 on the New York Times Best Sellers list, and she hosted the Golden Globes with Tina Fey for the second year in a row (and will do so again this month).

She also kept doing all of the things she’s been doing for a while, such as being the host and producer of “Smart Girls at the Party” and the executive producer of “Broad City,” working on a bunch of upcoming film projects, and being a mom.

All of her accomplishments are super impressive, and are quick to remind us how much she killed it last year. But I’d argue that it’s Poehler’s general outlook on life and her advocating for what it means to be a woman in the world today that makes her most deserving of the award.

Because basically, Poehler owns being a woman. She rocks being a woman. She takes cultural assumptions about what it means to be a woman and turns them on their head. She’s proved over and over that people who say women can’t be as funny as men are wrong (and dumb). She’s proved that you can be a mother and have the career you want, but she doesn’t pretend it’s easy. 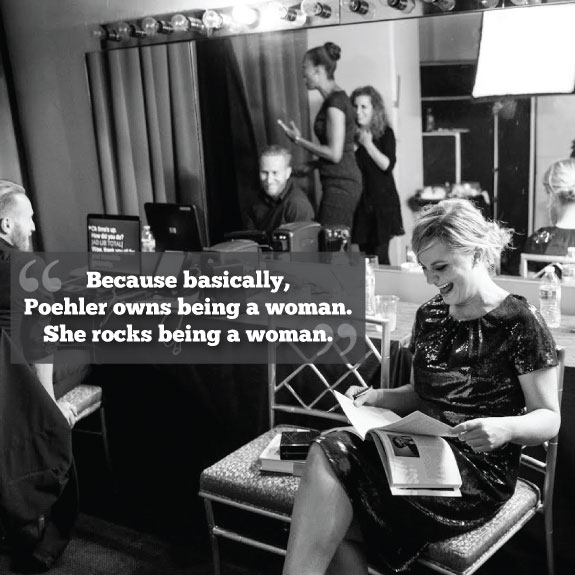 Poehler believes in empowering women through media: She turned “Smart Girls” into an online community after the web series was such a success. The “About Us” page reads “Positive spaces like the one ‘Smart Girls’ provides are much needed. ‘Smart Girls at the Party’ serves as a fun and insightful resource that champions young women, letting them know that their best option is to be themselves.”

“Yes, Please,” like “Smart Girls,” gives women permission to be ourselves. I bought the book in Logan airport before a trip to Texas, and by the time I got off the plane, I was drunk on empowerment (and those tiny bottles of wine).

For someone who has aspired to be a funny woman all my life, her story gave me a much-needed shot of confidence that the daily grind can wear thin. It’s a blueprint not only for those of us who want to make people double over with laughter, but also for those who want to do so with integrity and monetary success (hey, a girl can dream).

She’s got gems in there like, “‘Good for her! Not for me.’ That is the motto women should constantly repeat over and over again. Good for her! Not for me.” Poehler refuses to prescribe to the idea that there is one way to be a woman, or that it’s possible for us all to have the flattest stomachs and then cook the perfect dinner while also working as the CEO of a multinational corporation.

She takes “Lean In” and turns it more into a “Hey, Lean Whichever Way You Want. It’s Cool With Me.” 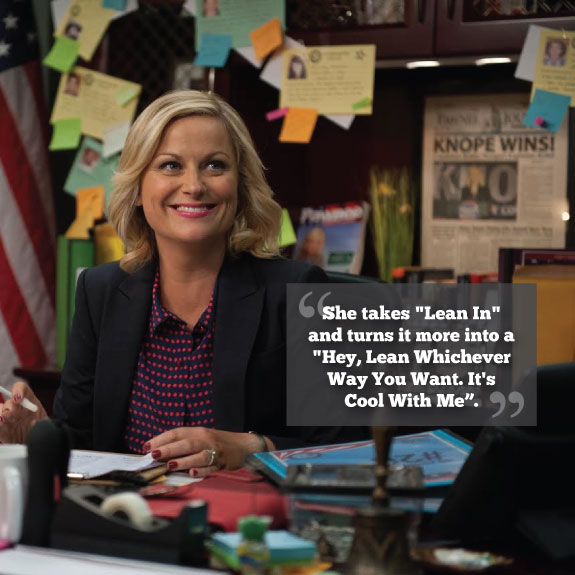 Poehler doesn’t prescribe to shame. She talks about the difficulty of divorce, about how it’s hard to have a perfect body after you have kids but that that’s okay, about how she’s proud of how good she is at sex and how much she likes it.

She doesn’t shame women for feeling shame, either. She acknowledges how feelings of inadequacy can so easily become engrained, writing, “It takes years as a woman to unlearn what you have been taught to be sorry for. It takes years to find your voice and your real estate.”

For those of us whom she’s helped find our voices and our real estate (even if right now they’re just small mind-apartments, which we’re hoping to someday flip and turn into career-houses), she’s an invaluable role model. Hasty Pudding got it right.

So, Amy, when you parade around Harvard, we’ll be cheering on the sidelines. All we ask is that you toss us a few pieces of candy or give us a princess wave when you see us. Hopefully accompanied by a wink and maybe a lewd gesture or two.

Enter to win a pair of tickets to attend The Hess Collection Seminar and Dinner as part of Boston Wine Festival 2018 at the Boston Harbor Hotel on Wednesday, March 14th. END_OF_DOCUMENT_TOKEN_TO_BE_REPLACED

Abe Rybeck, founder and Executive Artistic Director of The Theater Offensive was in studio this morning to talk about ClimACTS! Bounce, which celebrates art loud and proud at Royale on Wednesday, May 3. END_OF_DOCUMENT_TOKEN_TO_BE_REPLACED

Comedian Myq Kaplan is a comedian named Myq Kaplan. He joined me in studio this afternoon, and he’s at Laugh Boston this weekend. Click here for tickets. END_OF_DOCUMENT_TOKEN_TO_BE_REPLACED

My goodness, I love Sue Costello. It was great having her back in studio today to talk about her one-woman show, #IAmSueCostello, playing tonight at the Revere Hotel. Click here for tickets. END_OF_DOCUMENT_TOKEN_TO_BE_REPLACED

Trump Takes On…Boston! is running now through election night at Laugh Boston. David Carl was back in studio this afternoon to talk about bringing Donald Trump to the stage, the cathartic element (for both him and the audience) and how audiences have been reacting so far. END_OF_DOCUMENT_TOKEN_TO_BE_REPLACED

Trump Takes On…Boston! has arrived at Laugh Boston. I had comedian David Carl, who is portraying Trump, in studio this morning to talk about the show. END_OF_DOCUMENT_TOKEN_TO_BE_REPLACED