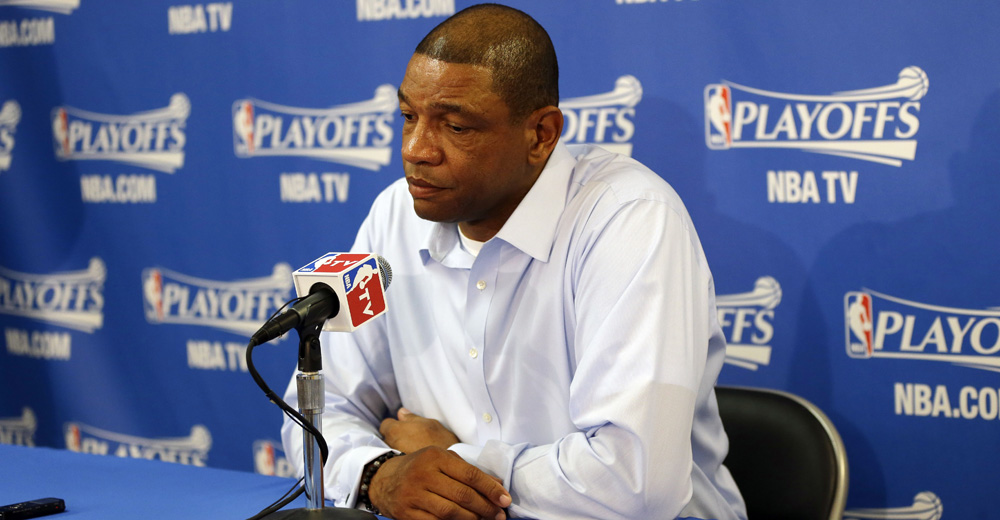 Even if you don’t care one iota about sports, at this point you have to have at least some cursory familiarity with the story, first reported on Friday night by TMZ, of Los Angeles Clippers owner Donald Sterling and the recording of the sickeningly racist comments he allegedly made to a former girlfriend.

Aside from being nauseated by the loathsome, subhuman Sterling, a pig of a man whose thought process is so backward, so despicable, that it defies belief, one feeling I keep coming back to with every headline or update I read is, “poor Doc.”

I’m referring to Doc Rivers, the former head coach of the Celtics who left Boston last summer to take over not only the coaching duties, but the entire basketball operation of the Clippers, a team stacked with talent and on the cusp of a championship. The idea was that Doc, who won one ring here and could easily have won a second, was the last necessary link to bring the Clippers, a historically inept and inert franchise, its first title.

Instead, after compiling the most regular season wins in team history this year and getting out to a 2-1 opening round playoff series lead over the Golden State Warriors, the Clippers are now ensnared in a morass of controversy and distractions that has zero to do with basketball thanks to their shameless bigot of an owner. And Doc, who has looked and sounded as if he’d rather be anywhere else on the planet since the story broke, is caught in the middle.

Of course, Doc is not actually poor. He makes $7 million per year to run the Clippers. But he’s still in an incredibly tricky situation here and not simply because he has to answer pretty much all of the questions about his hideous boss. After all, he did choose to work for the Clippers and that meant he chose to work for Sterling, whose abhorrent behavior and mindset hardly represent a recent development. It’s tough to imagine that he had no knowledge of what kind of person Sterling is when he took this particular job.

Does that mean we shouldn’t feel for him or for his players, most of whom also chose to play for the Clippers? Hardly. Sterling may be the scum of the earth and that may have been a well-known fact even before this firestorm. But to blame Doc and Chris Paul and Blake Griffin and the rest of the players on the Clippers roster for signing contracts to coach or play for him is not only unfair, it’s beside the point. Regardless of what they knew or didn’t know when they chose to be Clippers, they do not deserve to be pawns in Sterling’s reprehensible game or to be forced to take public responsibility for his hateful ignorance.

The clearly shell shocked Clippers were somewhat predictably blown out by the Warriors on Sunday, and the series, now tied 2-2, resumes tonight in L.A. Corporate sponsors are fleeing the Clippers in droves, the NBA is expected to announce disciplinary action against Sterling this afternoon and, oh yeah, there will be a basketball game too. Naturally, various folks with a public pulpit at their disposal have weighed in on what the league, the fans and even the team should do in response to Sterling’s toxicity. One school of thought involves fans boycotting the game with the rationale being that not going will hit Sterling directly in his wallet. This is a ludicrous idea for a variety of reasons, not the least of which is that all the tickets are already sold and even if every fan got his or her money back and no beers or hot dogs or t-shirts were sold, Sterling is still a billionaire and the loss of one home playoff gate would to him be the equivalent of you or I paying a parking ticket.

So why not take the opposite route and support Doc and his team? There are few folks in all professional sports, let alone just the NBA, who possess the class, grace and integrity of Doc Rivers, and while this is obviously a situation that no one wanted, it’s hard to believe anyone is better equipped to deal with it than he is. Despite being so clearly emotionally wounded by this episode, Doc has managed to remain above the fray, say all the right things and handle himself with the same kind of humanity and thoughtfulness that he always has, be it discussing how it’s up to him to keep his players focused or whether or not he will return to the Clippers next season should Sterling remain the owner. Instead of giving up, instead of allowing the sickness of his employer to get the best of him, Doc chose to keep playing, to keep fighting. Not surprisingly, his team closed ranks and followed him.

Yesterday, Doc confessed that he didn’t know what to expect from the fans come game time tonight in L.A. “We know that fans are in a dilemma as well,” he said in a statement. “We want them to cheer for the players and their team. It will always be their players and their team. From fans I’ve heard from, that’s how they feel, ‘this is my team, these are my players that I’m cheering for and that’s not going to change.’ My belief is that the longer we keep winning, the more we talk about this. I believe that is good. If we want to make a statement, I believe that is how we have to do it. I think that’s the right way to do it.”

The Black and Gold continue their run tonight at TD Garden. END_OF_DOCUMENT_TOKEN_TO_BE_REPLACED

Who will make the Class of 2018? END_OF_DOCUMENT_TOKEN_TO_BE_REPLACED

It’s been awhile since we talked Black and Gold. END_OF_DOCUMENT_TOKEN_TO_BE_REPLACED

You’re going to wish you were in the Northern Alps. END_OF_DOCUMENT_TOKEN_TO_BE_REPLACED

END_OF_DOCUMENT_TOKEN_TO_BE_REPLACED

Bill might be “on to Tennessee,” but we’re not. END_OF_DOCUMENT_TOKEN_TO_BE_REPLACED