American Outlaws Believe in Soccer, and Boston’s Passion for it 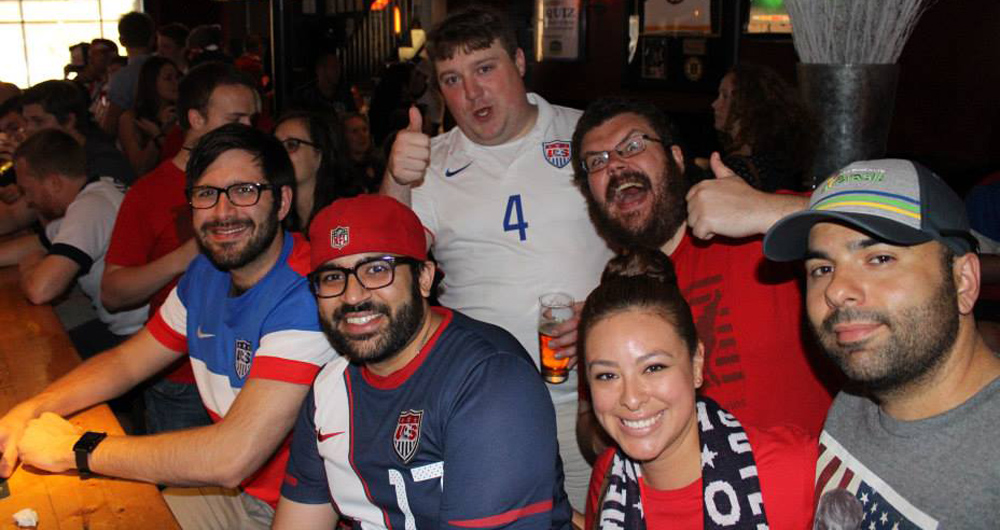 American Outlaws Boston chapter co-founder Fran Harrington and Globe sports columnist Dan Shaughnessy do not see eye to eye about the 2014 FIFA World Cup or the game of soccer.

Harrington, along with Garrett Quinn and Chris Camille helped create the fourth chapter of the Team USA official supporters club back in 2007. The Boston chapter of the club started with just 25 members, but those numbers have grown substantially leading up to the World Cup.

“It’s exploded from the qualifiers. Our numbers haven’t quite doubled but it’s quite close to that,” Harrington said. “I know maybe 10 percent of the people that show up and we’re at capacity for most of the games.”

Harrington helped create a relationship with The Banshee bar in Dorchester, which has become the Outlaws’ official hangout place ever since.

“I originally developed the relationship for the [New England Revolution],” said Harrington, who is also president of The Midnight Riders. “They were very loyal to us and one of the few bars that would show soccer over a Red Sox/Yankees game on a weekday.”

Harrington said that The Banshee has been filled to capacity for every U.S. game so far this World Cup. Something that isn’t always the case when the Outlaws head to the Banshee for Revs game.

“It’s a lot easier for people to rally around the U.S…the U.S. is an easy team to root for and people like getting decked out in U.S. gear,” said Harrington.

While the Revs might not be as popular as the men’s national team, they have seen their fair share of success in 2014 as well. New England is currently in second place in the MLS’ Eastern Conference with a 7-5-2 record before the World Cup break.

From a supporter’s perspective, Harrington admitted the Revs’ break was a welcome one, especially considering how hard it can be to get to Gillette Stadium from the Hub.

“The location makes it hard for people,” he said. “I live in the city. I don’t own a car.” Harrington believes that not having a dedicated soccer stadium in Boston is a “huge missed opportunity” for the Revs. If one was ever created in the city, Harrington believes people would truly realize the soccer fanbase that Boston has.

As far as soccer’s appeal in the U.S. is concerned, Harrington believes that the naysayers are blind.

“That’s definitely an outdated standpoint,” he said. “It’s an outdated theory that soccer is un-American. It’s growing old and [the people who think that] are being looked at as the weirdos. It’s recycled garbage at this point.”

Like the rest of his fellow Outlaws, Harrington will surely be somewhere around what is sure to be a filled-to-capacity Banshee on Tuesday when the U.S. faces Belgium in the Round of 16, ready to argue with those who think the States’ soccer hype is just a fad.

Enter to win a pair of tickets to attend The Hess Collection Seminar and Dinner as part of Boston Wine Festival 2018 at the Boston Harbor Hotel on Wednesday, March 14th. END_OF_DOCUMENT_TOKEN_TO_BE_REPLACED

The Black and Gold continue their run tonight at TD Garden. END_OF_DOCUMENT_TOKEN_TO_BE_REPLACED

Who will make the Class of 2018? END_OF_DOCUMENT_TOKEN_TO_BE_REPLACED

It’s been awhile since we talked Black and Gold. END_OF_DOCUMENT_TOKEN_TO_BE_REPLACED

You’re going to wish you were in the Northern Alps. END_OF_DOCUMENT_TOKEN_TO_BE_REPLACED