Alternicon is all about independents. In an online community saturated by artists looking for recognition and success, it can be difficult to feel noticed. There are webcomics like Homestuck and podcasts like “Welcome to Night Vale” that have become pinnacles of fandom and popularity–in fact, most of the people who attended Alternicon are in a costume from one of these properties–but there are plenty of creators searching for an audience. The convention, which took place at the Midtown Hotel over the weekend, attracted small business owners, authors, writers, and fans to a compact but lively space that all sought entertainment.

Alternicon prides itself on being a con that cares (it’s in the tagline). According to con chair Ryan Caswell, this means making sure that con goers can interact with staff, talk with creators one-on-one, and generally, as Caswell says, not make people feel like ants, the opposite of large events such as Anime Boston or Comic Con.

We talked with some of the people–audio directors, self-published authors, and more–who gathered to showcase their work and tried to ask a simple question: what is it all for? Why gather at a tiny convention at all? After talking to people, you come to realize that it’s all about the Internet bringing people together over a shared passion, about growing your audience there, talking to people there, and eventually, meeting them in person. 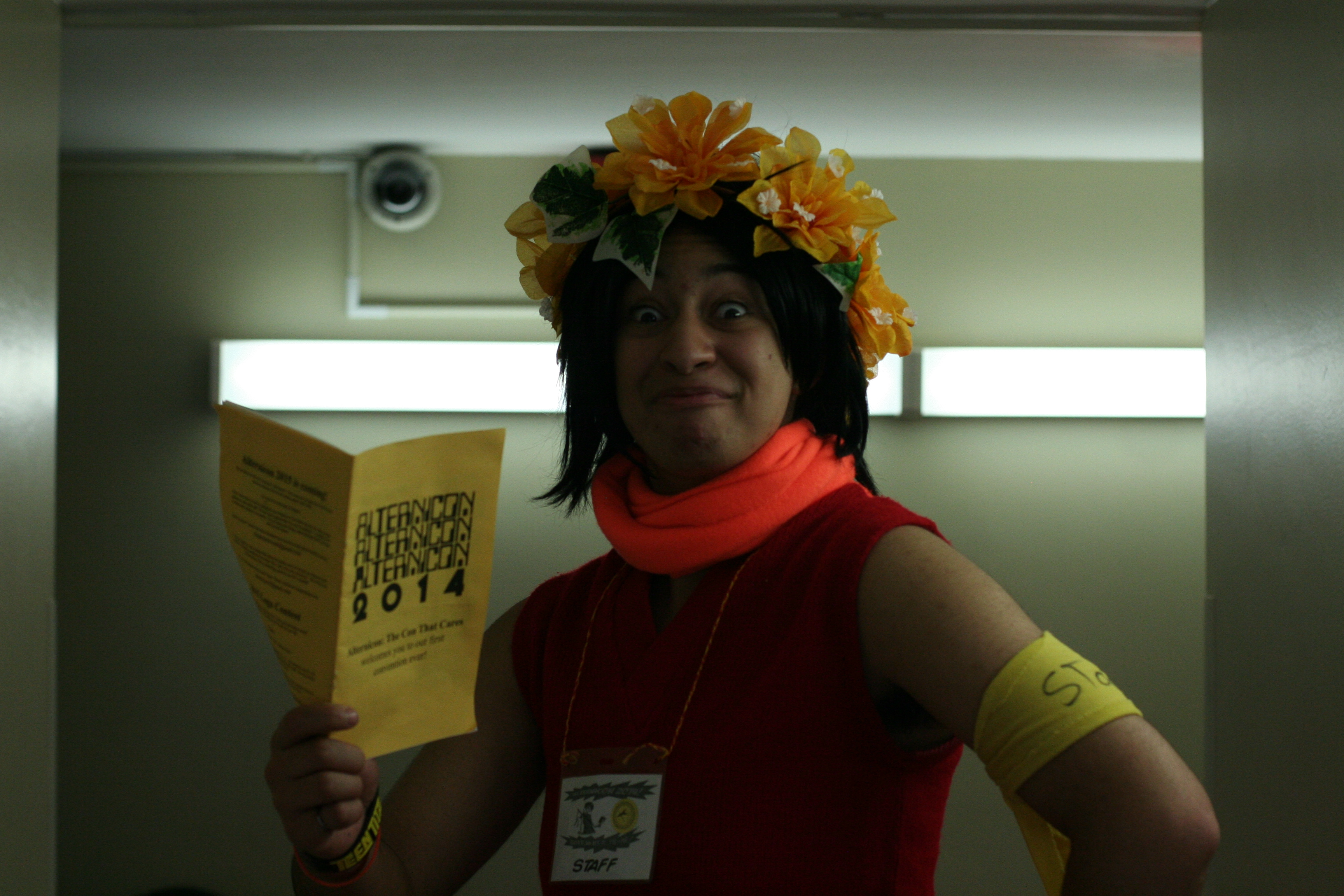 How did this whole thing come about?
For starters, the concept was we really wanted to do something different from Anime Boston or Comic Con. We wanted to give a niche for people who didn’t have a niche… the chairs wouldn’t be these mythical creatures up in the clouds that you didn’t know, we wanted to be there and be personal and really make sure people understood that Alternicon was “the con that cares” so we wanted to do things differently. We wanted to focus on alternative media because you can go to an anime convention and you can see anything mainstream, even things that are a little more obscure… but webcomics never get the time of day. You might go to a small, independent comic convention like MICE and you’ll get a taste but it’s a different atmosphere, it’s not ‘go and dress up’ it’s ‘go and work and maybe buy work.’ we wanted something fun.

What do you think is the draw to cons like this?
I think the draw is that you can really get to know the person who’s doing it. When it comes to manga and anime, it’s this big thing and yes you can know the artist by name… but you can’t really send them a message and expect a reply. all of a sudden, you get these alternative media outlets. Chances are, when you see that person posting on their website, you can send them a message and they’ll reply right back ‘I’m excited that you noticed me’…it’s this next level of interaction where it’s no longer “I’m just talking to you online.” You’re here, we’re here and we get to geek out about the same thing.

Have things been different for radio productions because of the Internet?
Michael: Not really because PRMP started around 2005 and podcasting had already started around then. what has changed is the availability of equipment and programs to do editing. Before we started, we had one person with studio level software. Since then, the rise of Audacity and other programs like that, now we can train people to do editing a lot more simply.

Is it easier to get work out there?
Michael: It’s easier for us, but it’s easier for everyone else. Even the folks behind Night Vale, nobody can say why Night Vale is more well known than say the Atlantic Radio Company or the folks out in the Midwest. There’s a bunch of people doing stuff.

Do you think podcasts are a great way for people to get into audio theater?
Brad: I sure hope so! It’s kind of weird, so Second Shift (the last production he worked on) ended in 2011. I’m very proud of that show… but it all happened pre-Night Vale, which means before anybody except a very small niche of people cared about audio theater. so on one hand I’m a grumpy old man “ah kids these days are into shows that aren’t my show” but on the other hand it’s cool to see that this is becoming a thing that people are taking seriously because I love watching shows. I think it’s a very unique way to tell a story, entirely with sound, so I really hope that it’s the beginning of the next big resurgence of audio theater. 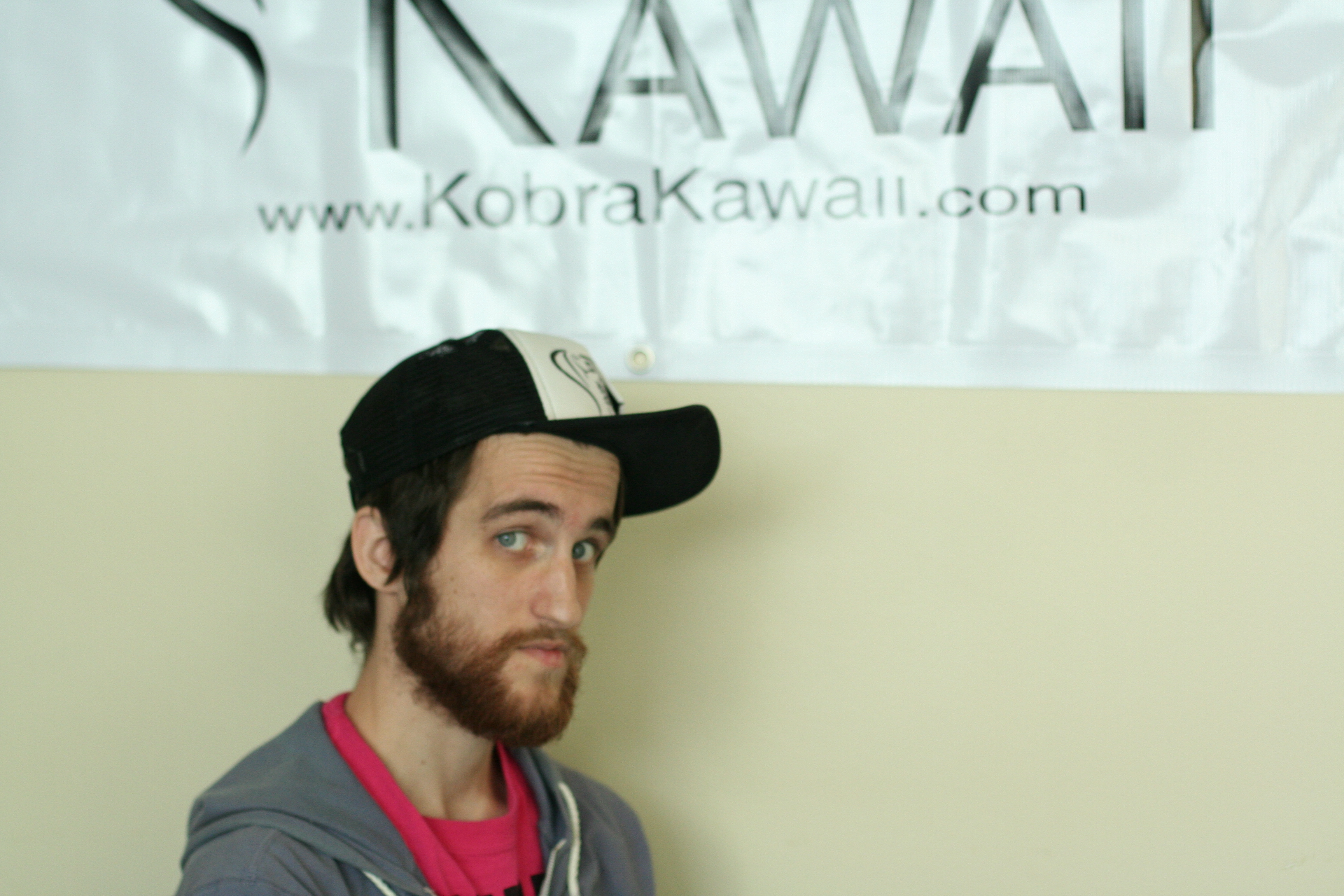 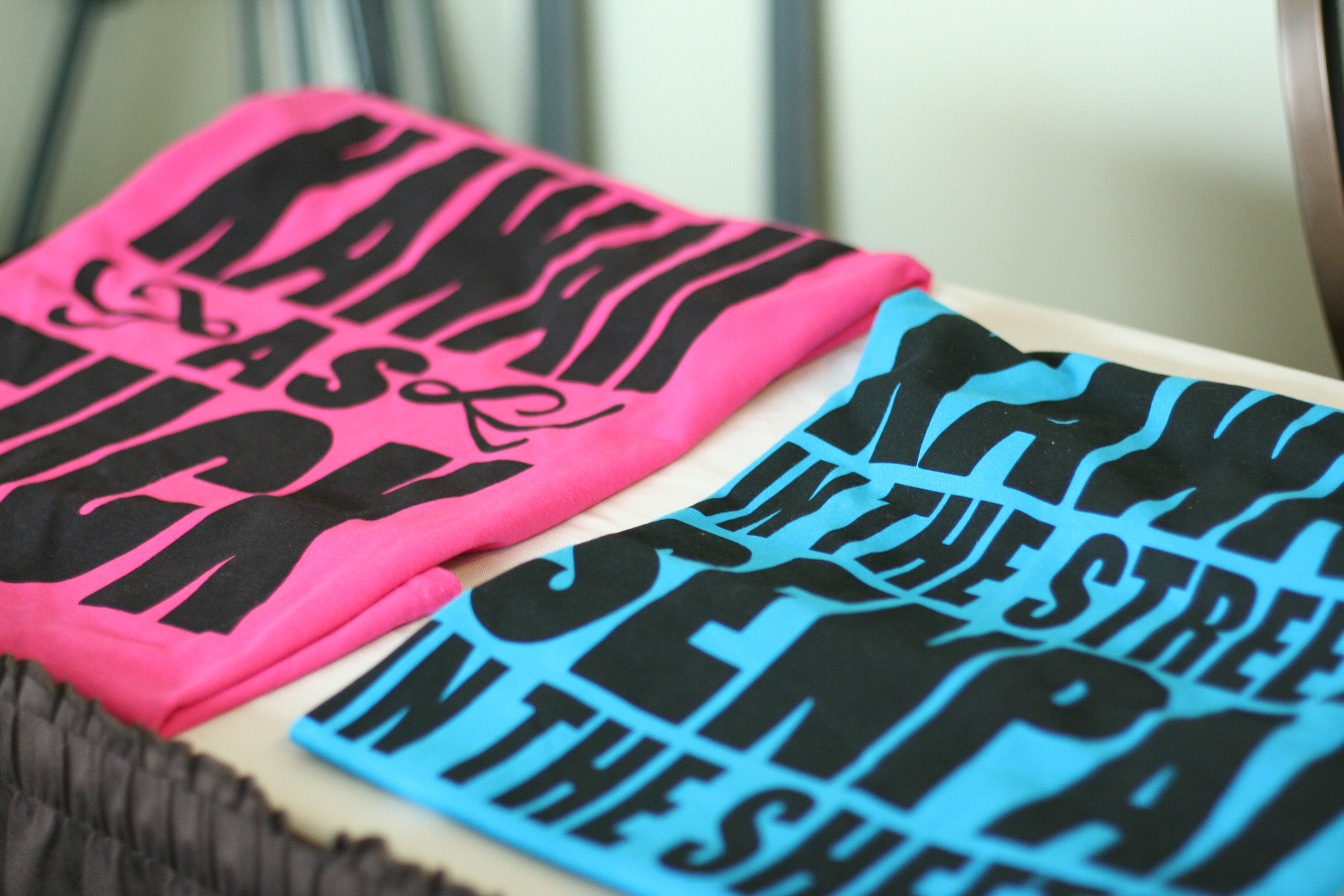 What is it about a nerdy audience that is so attractive?
A lot of it has to do with the fans are really passionate about things, so when you make something they like and they come over to their table and their eyes light up… I think that has a lot to do with it. There are so many vendors at conventions that, you don’t get the feeling they’re a part of the culture, they’re just trying to make money off these people. People can tell I put a lot of effort into this because I love it as well. I know what people want. Especially when it comes to T-shirts. There are a lot of vendors where the designs are kind of terrible but people like them anyway, so if I can give people a better product than i’m happy.

What separates the audience, instead of making T-shirts everyday people?
It’s kind of, you can kind of say it’s separate but once you think about it everyone has their own thing they’re into, so no matter what it is, you just have to find your audience to pander to. some people are into motorcycles and wear motorcycle T-shirts. Some people are into dance and wear dance T-shirts. As long as you focus on one thing, people will be into it. 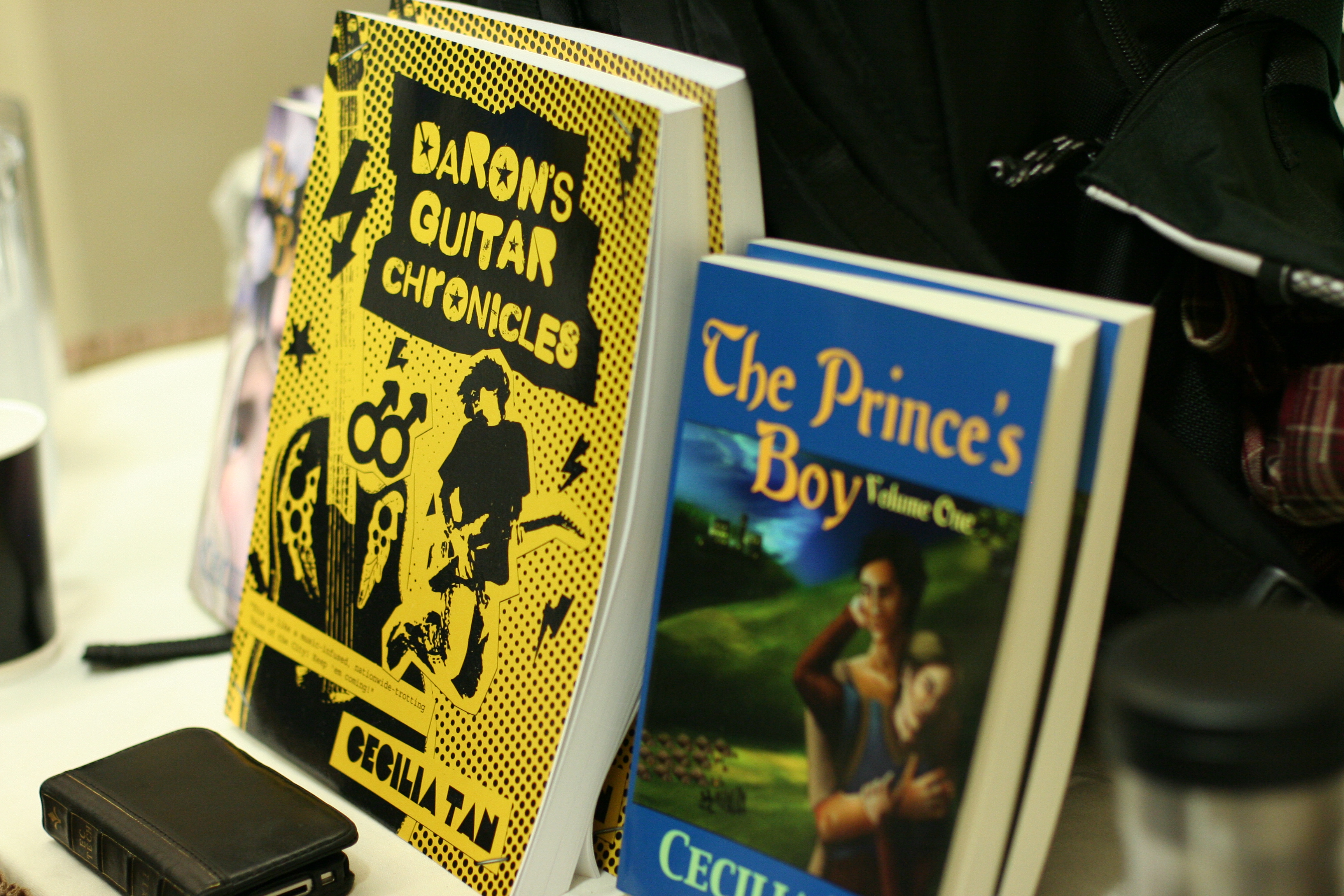 Which do you prefer? Self-publishing or working through a publishing company?
I love self publishing because i get a direct connection to my audience and I get to find out is my writing really working. That’s really addictive as a creator. you post a chapter of your web serial and you get comments immediately… you know, it’s fantastic. It’s as addictive to write it as it is to read it. 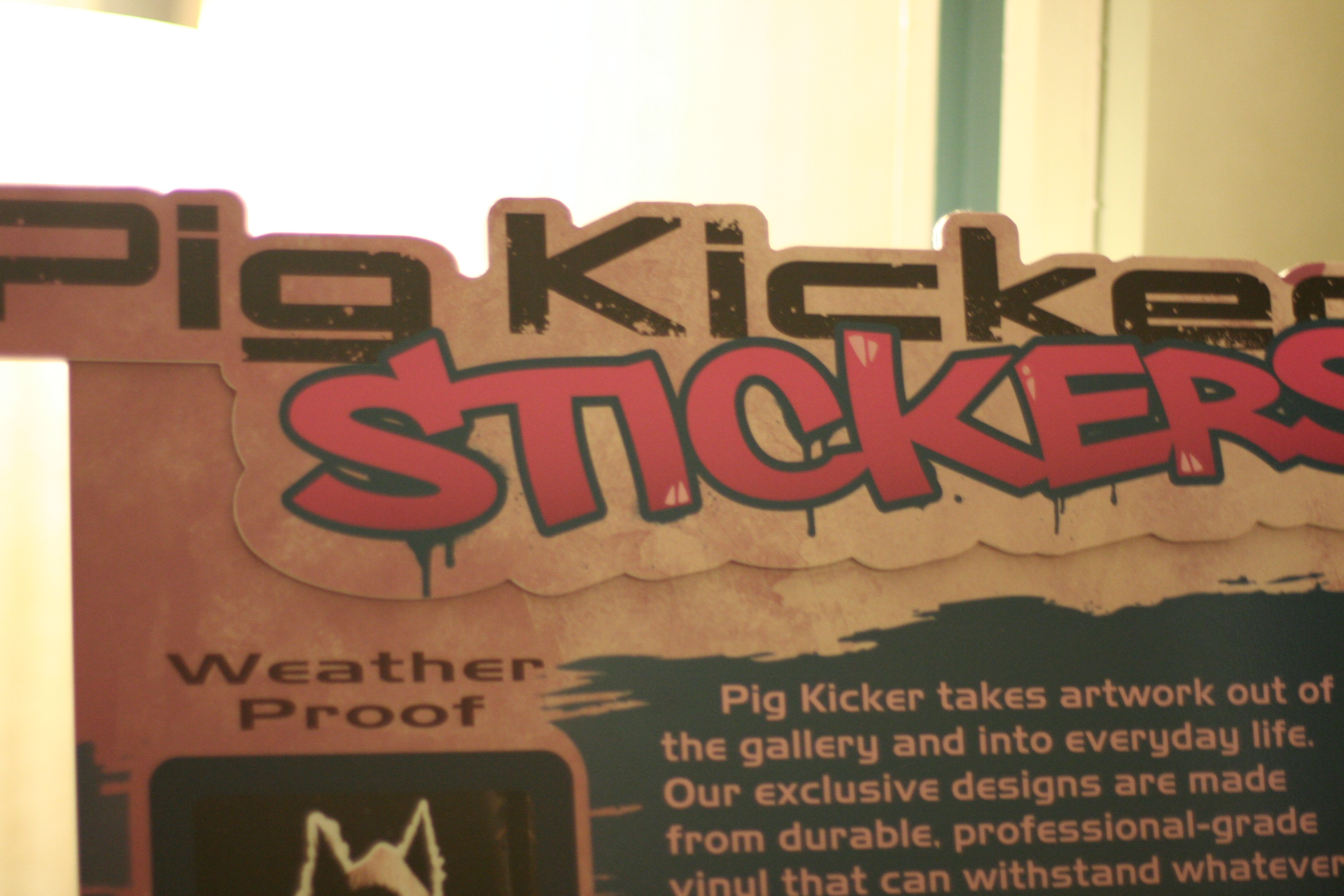 Why got you guys into making stickers?
A lot of it was working with a sign company, so a lot of the vinyl that we use for the signs, they’re all weather resident and whatnot, and it inspired me okay, well this material could be used not just for signs, but for stickers, why not put awesome artwork on it. Also making it so to get artwork out of galleries and into everyday life and onto everyday objects: cars, laptops, notebooks bc to make the world a more beautiful place.

Taking art out of the gallery, why was that part of your goal?
Well I’ve always been a fan of traveling and being portable, just being able to take what you got and bring with you wherever you go. also being someone who loves art and seeing galleries, seeing pieces and being like ‘oh I want to take that home with me’ and then you look at the price tag. This was kind of a way to make quality artwork accessible to everyday individuals. You don’t have to be a lawyer or attorney to enjoy awesome artwork and take it home with you.