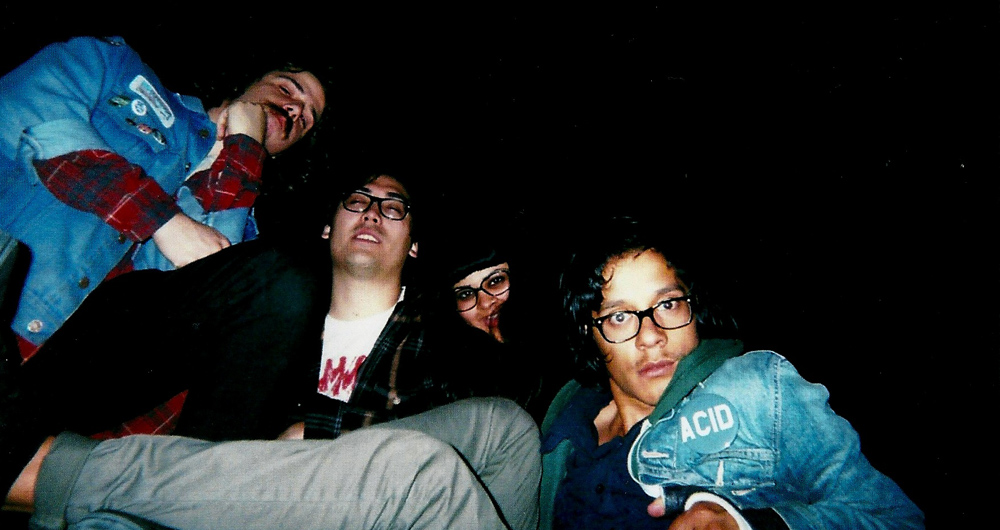 Allston’s brand of rock is best heard in a basement, sans earplugs, and maybe with a bit of a chip on your shoulder. This is the type of thing garage rock duo Miami Doritos specializes in. Short romps, with distorted guitar cranked through the roof, and a focus on energy first and pacing themselves later.

Bass lines seem like a afterthought while tearing through one of the band’s live sets, which have included frequent trips to Charlie’s Kitchen, a set at last year’s Allston DIY Fest, a tour with fellow Allston noisemakers Nice Guys (who shared a split 7″ with the band, see below), and more. No matter the setting, the band tends to deliver a scratchy dose of punk which is sure to lead to a fit of riff-induced vertigo, whether you’re sucked into the pit or not.

Miami Doritos, who describe themselves as a “two-piece bathing suit,” that “will gladly play first, is semi-formal, and tried to skateboard but couldn’t,” is embarking on a small east coast trek later this month, which kicks off with a Providence show on May 21 with local pals SKIMASK. Today, the duo, consisting of guitarist and vocalist Kurt Egghart and drummer Alex Aronson, picks our Midweek Playlist. The describe the theme as, “based on two things – stuff with Miami in it, and awesome songs that we like and try to rip off. But it’s mostly both.” Tune in and enjoy.

“This is the kinda party JAMMER that we aspire to create. Of course we come nowhere close to this kinda funk majesty, but how could we? Two words – Too Smooth. It’s about checking out a lady with “See-Thru” Clear Pants, and seeing though her insane party get up into her inner party identity. I like to think we are as transparent as the pants in the lyrics.”
“This drummer has a kick drum, but only uses it as a tom holder. So tribal. So punk. Is it racist to say that a band with a black dude is tribal? Doesn’t matter because Rock n’ Roll as all get out.”
“These guys put out a pretty okay LP, but this little EP is sick. These are some nasty drums. Better than Phil Collins and Ginger Bakers safaris into African beats, fight me.”
“This is Keytars done right. But were they ever so wrong?? These guys put the “No” in Noise Rock.”
MIAMI CATS by 猫 シ Corp. & SEPHORA脳バイブス


“Don’t know what this is, but it says Sega and Sonic is my new jam. Very mellow tunes to surf your comforter to.”
“Great Band. Sick name. Wish we were the III. These guys put the “Ace” in Space Rock.”
“Noise Rock LEGENDS. When I was 14, I watched a Be Your Own PET video and the bassist was wearing an Afrirampo t-shirt, so I looked it up and my mind was blown. So much scream-u, so much noise-u. These gals are so Rock N’ Roll its crazy, The self-released CDR this song is from is way weirder and noisier than this video, but has all the spastic garage fun of this song. A++. Plus bonus points for nasty 2-piece. #1 inspiration right here.”


“Ski Mask is still the best b̶a̶n̶d̶ in Boston. 4 EVA LTD.”
“These guys are 2 NICE, they should take it down a notch because the smiles are hurting my face. What can I say? Dang catchy, memorable lyrics, finger-pickin hootenanny guitar. I wanted to put up the song “Freedom Pizza” but I couldn’t find the video and this one has buds in it. These guys’ music reminds me of Looney Tunes.”
“Up Da Punx! But for real, ripping fast and Loud Guitar Rock n’ Roll is the true king of Good Time Music. These guys put the “Pun” in Punks.”